Publication and year unknown The meaning of the term "livery" has changed with the development of the automobile. At the start of the twentieth century, a livery was a place where a horse and wagon or a coach and coachman might be hired. The Sanborn maps of 1916 and earlier show stables behind most buildings; by the 1945 maps, they are gone.

Several liveries developed into related businesses. Maddens turned into a moving and storage company; Latour's sold feed and grain, and then added firewood, coal, fuel oil and even groceries and automobiles.

As the automobile replaced the horse, a livery came to mean a cab stand, and a livery man became a cabby. Livery men, of both kinds, in Saranac Lake included 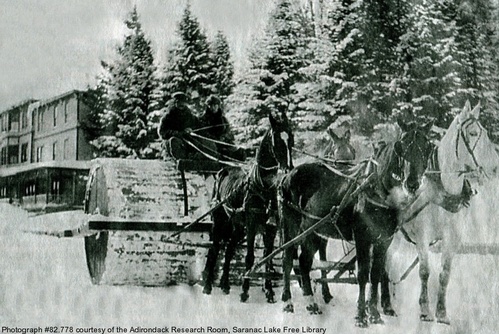 And how did people get around in the winter? Giant snow rollers packed the snow so that horses didn't founder in deep drifts. Adirondack Daily Enterprise, January 19, 2013.

Eldredge & Mason are advertising a big auction at their store on Saturday, having purchased the entire livery equipment of the Saranac Inn, which has been acknowledged to be the best equipped livery in the Adirondacks. All will be disposed of at public sale: The property embraces 20 horses, 25 wagons and carriages, 20 sets of harness and other articles going with a livery.