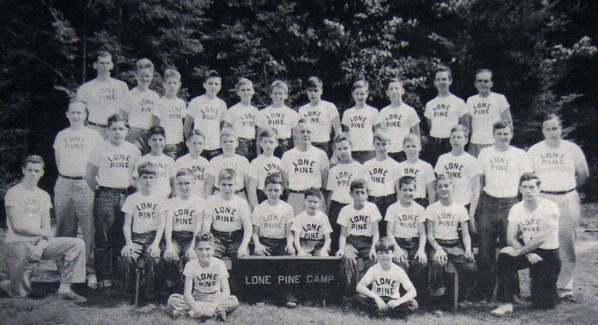 Geraldine Collins writes of it in her 1977 The Brighton Story.

Camp Could Celebrate 40 Years - But Doesn't

The word "camp" in this area usually brings to mind the family place out on the Lower Lake or a summer cottage owned by relatives on Long Island. Yet to thousands of youngsters, "camp" means only one thing: the two months they spend roughing it — to some degree— in the mountains, living rustically, eating heartily, playing lustily and growing so that mom and dad can hardly recognize them at the train depot on their return home.

The Adirondacks are a traditional place for these camps both boys and girls. One of them this year is finishing up its fortieth anniversary this year with not even a celebration

Lone Pine Camp, out on Lake Osgood north of Saranac Lake, is owned and directed by the William Roots, that is, both Senior and Junior. It was begun years ago when Mr. Root, Sr. found that teaching in private schools in and around New York City was fine except for long summer months of unemployment. [illegible]

Since then, the camp has grown to 40 boys and spread out with the clearing away of woods to make room for play. But it has not grown as large as it might. Billy Root (to make it easier here, he's the younger Root) said that the camp could easily grow, but he and his father prefer to handle the size they now have. Ages range from seven through 13.

A walk through the camp, which is invariably taken by parents who drop in at any time, brings familiar sights and sounds and smells to a former camper: wind-tossed pines, cabins filled with the paraphernalia that only a summer away from home can accumulate, well-worn baseball diamonds, and shouts from all directions.

The treasure hunt that afternoon used the outdoors for a playground. It includes a ball diamond for Little League play, another field for softball practice, the boat house with canoes and fishing poles in abundance, and numerous paths running through the woods. In the recreation room the old was mixed in with the new. A pool table that has seen some wear, some old Tom Swift books, an upright piano stood next to a few used pin-ball machines and a television set. The latter would horrify the old-time campers who were there when campers really camped out in tents and would consider today's cabins as luxurious.

Each boy averages two trips a season, which may be both a canoe jaunt and a hiking trip. The older boys take a three-day hike into the peak region to tackle Marcy. The camp is well-equipped to tackle such an athletic program, for, as often is the case, its directors are experienced athletic teachers. Mr. Root, Sr. graduated from Columbia with varsity letters in hockey, tennis and baseball and has spent his life teaching in boys' schools. Billy Root, known to area baseball enthusiasts as a former Brighton Blues and Saranac Lake Chiefs member, is athletic director at the Browning School in New York City. He is a Cornell graduate. Assistant director Gerard McGrath is in charge of the athletic program at the Allen Stevenson School in the City.

The camp, however, is also able to offer something more unusual, that is, a special morning period of academic instruction. Remedial reading is taught to those who need it, by Mr. Root, Sr. who was trained at the New York University Reading Clinic. Billy Root and Mr. McGrath teach other subjects as do all of the staff except junior counselors.

Lone Pine is, as evidenced by the Root's, a sort of a family affair. Yet, more subtly, family ties are sometimes indirect and bring added benefits. Mrs. Root, Jr., who was formerly an Everett of Saranac Lake, apparently enjoyed the cooking so much at her St. Lawrence University sorority house that she persuaded the cook to come to Lone Pine nine years ago. 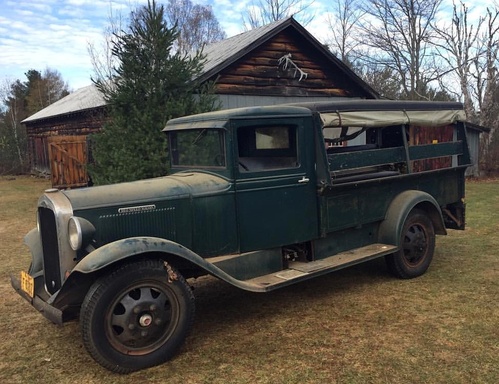 The 1933 REO Speedwagon used to take campers to mountain trails and ballgames, kept running by John W. Hawkinson
Courtesy of TheHawkeyeFarmA few girls work in the kitchen, but they are the only females present on an all-male domain. Girls may not be noticed by campers but, in the fine spirit of counseloring, the young sports on the staff notice a good-looking addition to the kitchen staff. Modern dishwashers may soon be introduced by Billy Root as efficiency measures, but this will cause dismay in some quarters.

A typical day at Lone Pine begins—officially, that is—about 8 when the cow bell is sounded. Half an hour later, breakfast is served in the dining hall, each table of campers headed by a counselor and waited on by campers in rotation.

Inspection of cabins and campers is held personally by Billy Root following an after-breakfast clean-up period. Tutoring is given then or a one-hour reading period, depending on the boys. Morning activity instruction follows and at noon time a large dinner is served.

Afternoon events vary with the day and may include team sports or competition, such as riflery with a neighboring camp. Evenings see voluntary participation or relaxation with some special event, such as "spree night." Talent night on Sundays is a regular affair, regarded in a corny, campy sort of way.

Lone Pine is a camp in the true delightful sense of the word. It has long been one of the attractions of the area. The blue baseball cap with LP on them are familiar sights to residents as is the 1933 Reo Speed Wagon, donated by a parent when brand-new and still in use.

There is no celebration this year, the 40th anniversary. Billy Root said that perhaps for the 50th they will hold a ceremony. As it stands now each boy celebrates each day just being at camp.

The Saranac Lake Bears nine fell before the Lone Pine Camp combine, 7-3, Thursday afternoon in their game played on the winners' diamond.

The invading Bears notched their first run in the top of the first inning when Knight drew a walk and then proceeded to steal second, third and home like Ty Cobb of yore.

The Bears got their other runs in the next frame as La Pan strolled with one away, Gonzales struck out and Slattery and La Hart walked to jam the bases. Knight then smacked a scorcher to Mclnerny whose peg to first was bobbled, allowing Slattery and La Pan to score.

The Lone Piners roared back in the bottom of the first stanza to collect six big runs. Mike Platt, leading off, rocked a homer over the left field fence, Ames singled to center and Wanner did likewise to left. Both runners moved up on a passed ball. Fitzpatrick flied to center but the ball was dropped with Ames scoring on the error. Farrell then brought in Wanner via his sacrifice fly to left.

Delbos walked and stole second and scored with Fitzpatrick on McInerny's safe poke to left. The latter tallied on back-to-back singles by Platt and Ames.

Lone Pine picked up its seventh counter in the next frame when Fitzpatrick doubled to center and romped home on another two-bagger by Gillespie.

The highlight of the game, aside from Platt's four-master, was Eric Tansboerger's work on the mound. The Lone Piner struck out 10 of the Bears in his five innings of elbowing.

I attended Browning where Mr. Root was everyone's favorite (English) teacher.  Danny McAloon was one of our gym teachers.  The first time I met him was in 7th grade and he walked into the gym looking like he had been hit by a truck; scared the crap out of all of us.  He had just fought Vito Antuofermo at the Garden.  Mr Root was the greatest!  I remember he would occasionally let us listen to baseball games on his transistor radio.  He would hide it behind his book and tell all of us to open our books just in case Mr. Smith walked by and looked in the window.  He also liked to read Jean Shepherd stories (writer of A Christmas Story).  I should add that nobody could fire an eraser or a piece of chalk faster or more accurately then Mr. Root.

I spent a great summer at Lone Pine in 1974 along with Mr. Root and one of my Browning coaches Ron Szumilas.  I remember Strat-o-Matic and also a great professional wrestling match the campers and counselors had.  Chief J Strongbow & the Vachon Brothers.  Our counselor who's name I cannot recall had a reel-to-reel and spent most of that summer listening to Jimi Hendrix All Along the Watchtower & Purple Haze.  And in keeping with Ralphie's mother's concern, I managed to get shot with in the leg with a BB Gun while horsing around with one of the other campers.  I still have a very small scar and that pellet is still in my leg!  Mr. Root's son who worked at the camp and also at MSG's Gerry Cosby's, drive me home to NYC.  Mr Root gave me $10 (which felt like a $1,000) so we could stop in Cooperstown along the way to go through the Hall of Fame.  Two of his biggest heroes were being inducted that summer; Whitey Ford and Mickey Mantle.  GREAT, GREAT, GREAT memories.  The whole experience should have been a Shepherd short story.

* It's interesting that it was open that late. I had heard that it closed in the fifties, but I was there in the early sixties. —MWanner