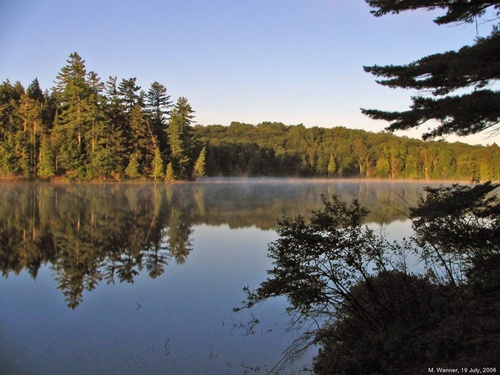 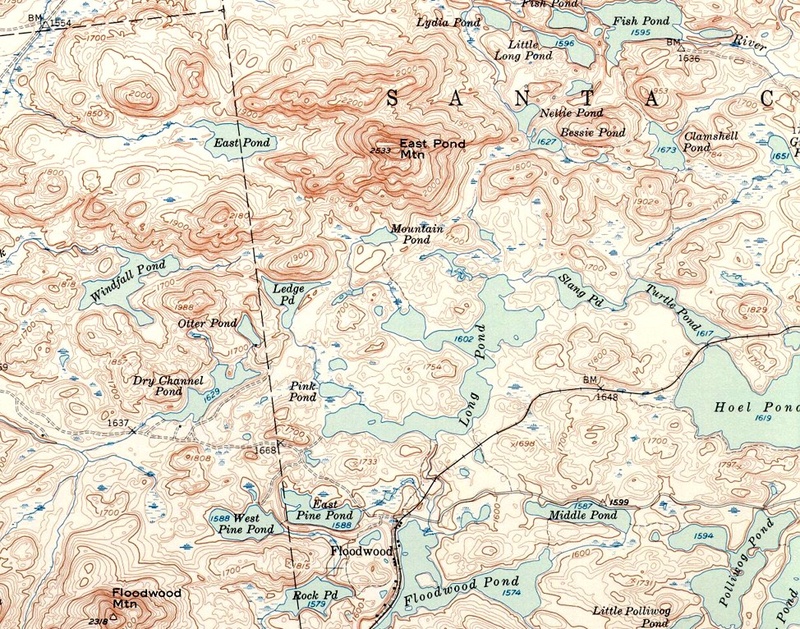 Detail from the 1905 USGS St. Regis Quadrangle showing Long Pond, center. Long Pond is a 338-acre pond in the St. Regis Canoe Area; it is the second largest pond in the canoe area. It is two miles long and has two small islands. It is reached by quarter mile carry from Floodwood Road. Long Pond Mountain is unusual in that the only trail up it can only be reached by paddling two miles from the put in to the trail head.

Long Pond was the site of some fifteen tent platforms under a permit system adopted by the State of New York in the early 1900s that was abandoned in the early 1970s, when the platforms were removed and the pond was made part of the St. Regis Canoe Area. Permit holders included Randy Bishop, Hugh McLaughlin, Leo Cummings, Walter A. Sprague, and Dr. Donald Richter. Guide Henry Davis had a camp on Long Pond on Pine Point, near the carry to Nellie and Bessie ponds. It was apparently turned into a tent platform in 1914, and removed entirely in the mid-1970s.

Note: There is another "Long Pond" eight miles to the northeast, near Black Pond on the Keese Mill Road.

SARANAC LAKE - The State of New York is busily implementing one of the most unpopular mandates of the Environmental Conservation Department, the dismantling of the tent platforms on state forest lands.

On Long Pond a small working crew has already taken down several of the original 15 camps and the remainder are in the process of being removed as the abandoned furnishings are sledded to an area near the Floodwood Road.

The job is not difficult since chain saws and bonfires reduce the wood to ashes. The stoves, bunks, tables, sinks, chairs, and cabinets are loaded onto sleds and hooked behind snowmobiles for transporting to the designated pick-up site.

Many of the units have been a part of the woodland background for over half a century. Others have only recently been incorporated into shoreline recreational oases enjoyed by families from metropolitan centers and even out-of-staters.

The permit holders held out as long as they could, hoping for a reversal or some other legislative miracle that would allow the camps to remain under strict supervision at a fee. Nothing happened to forestall the original mandate ordering the camps vacated by December 1975.

Progress on Lower Lake which is the location of over 500 tent platforms has lagged, and the current rate of removal could not possibly insure a camp-free shoreline by the start of the vacation season.

The sporadic attempts to salvage parts of their camps by permit holders on the Lower Lake shore perimeter has left it in a state of confusion and litter.

The lake itself may become" one of the largest eyesores in northern New York if a careful blueprint for clearing the campsites isn't followed on a set timetable.

Why Long Pond was singled out for the initial thrust of state efforts to clean out the camps is not clear except that its isolated location could cause problems this summer if the camps are not taken down immediately. Long Pond is prohibited to motor boat traffic since it is a canoe route between lakes in the Saranac Inn-Fish Creek areas.

Camp No. 1504 carries a crudely written message stating that the permit holder has a special extension which won't expire until June of this year. The red crayon message asks that it "not be vandalized" and the camp has not been touched by the clean-up crew so far.

A rumor to the effect that an extension could be obtained in special circumstances was apparently unfounded as Walter A. Sprague, holder of an adjacent permit asked at the State Conservation offices at Ray Brook if the extensions were available and was told by state personnel that they knew of no such exceptions.

If arrangements were made with the state to purchase the lumber in the camps prior to December 1975 the permit holder could then be given until June of 1976 to take them down themselves.

At present many camps are being vandalized since they contain items which have value and are easily accessible.

The camps are state property and no one is allowed to use them or take anything from them according to state police though they seem to be classified as "fair game" in many people's minds.

The state police say they are now having difficulty telling the good guys from the bad guys, though recently arrests have been made.

The state has not made it clear whether any of its own shoreline blights will be removed including two large double deck boathouses on Lower Lake, a camp of the semi-luxury type used by several Conservation Department officials and families from Albany, and the building described as the "engineers' cabin" at the State Bridge on the Tupper Lake Road which has long been a bone of contention with tent platform permit holders.

Demolition and cleanup of state platform camps on Long Pond is under way utilizing snowmobiles and sleighs. Fifteen camps are being leveled in the designated canoe waters. John Dalton and Doug Fletcher unload at the pick-up depot near the Floodwood Road.

The new parking area has been constructed 100 feet east of the Floodwood Road on the trail which leads to Long Pond.

The opening of the new parking area allows for official closure of the Long Pond Road and the old parking area adjacent to Long Pond, which have been a long-standing non-conforming use," stated Monroe

This action has been taken in accordance with the canoe area management guidelines set forth in the Adirondack Park State Land Master Plan which requires the removal of all non-conforming facilities in this unit," Monroe added

The Long Pond Road had extended 910 feet into the St. Regis Canoe Area and terminated near the shore of Long Pond in the Town of Santa Clara, Franklin County. The new parking area provides space for 20 vehicles.

For information on lumbering in the Long Pond area, see the January 25, 1898 article in the Plattsburgh Daily Press article written by Seaver Miller on the Lumbering page.