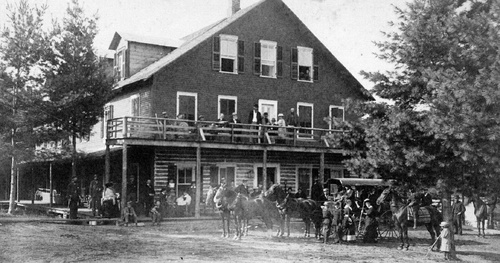 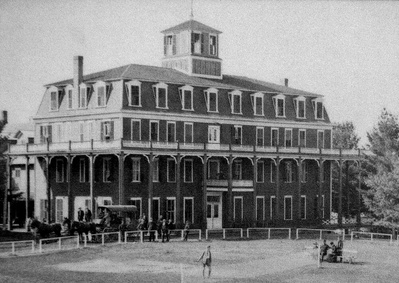 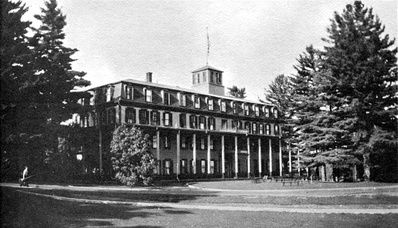 Loon Lake House, 1883. (Franklin Historical Review, August 1966) The Loon Lake House was built on the south and east shores of Loon Lake, about 15 miles northeast of Saranac Lake by Ferdinand W. Chase and his wife Mary in 1879, originally as a large log hotel that could accommodate fifty guests. The area was already famous among sports, as Paul Smith had established his first hotel on Loon Lake in 1848, followed by Hunter's Rest nearby on the North Branch of the Saranac River in 1852. 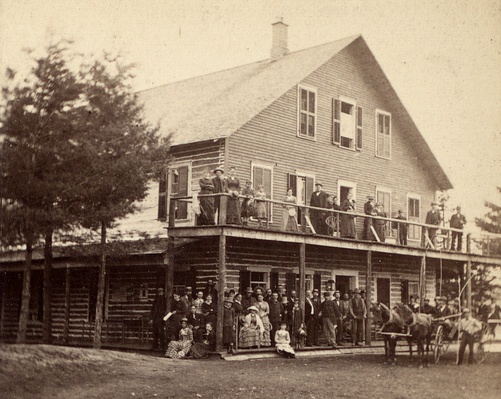 "Group of Tourists" 1870, by George C. Baldwin.
The Miriam and Ira D. Wallach Division of Art, Prints and Photographs:
Photography Collection, The New York Public Library.
The New York Public Library Digital Collections. c. 1880.Located on the Port Kent and Hopkinton Turnpike, the Loon Lake House was an immediate success. Like Paul and Lydia Smith, Ferd and Mary were well suited to their roles as host and hostess; Ferd was a charming raconteur and Mary an excellent cook and manager. The hotel's capacity was doubled in 1880 with the addition of a new wing. In 1882, its capacity was doubled again with the addition of an imposing four story building that had views of the Green Mountains of Vermont to the east and the High Peaks of the Adirondacks to the south.

In 1887 the Chateaugay Railroad reached from Plattsburgh. An additional three story annex was added in 1893. By 1910 further additions and cottages brought the total capacity to 350, and after World War I, space for an additional 150 guests was added. The property grew to include a tract of over four thousand acres, with an 18-hole, PGA golf course, a tennis court, pool and billiard parlors, and a bowling alley. 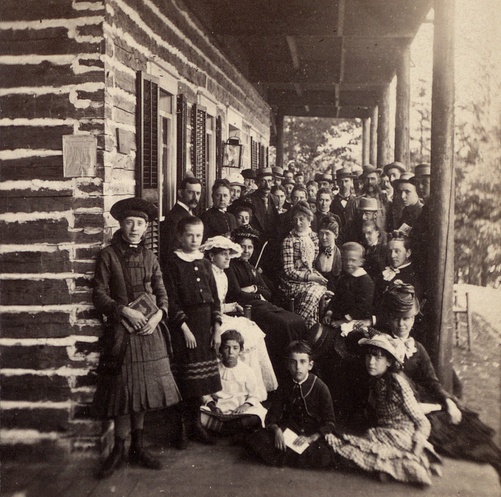 Family get together, c. 1880, by George C. Baldwin.
The Miriam and Ira D. Wallach Division of Art, Prints and Photographs:
Photography Collection, The New York Public Library.
The New York Public Library Digital Collections.  In addition to the ever-expanding hotel, Mary Chase leased land to guests who wished to build their own cottages, with the stipulation that they contain no cooking facilities: guests were required to use the hotel for meals. At the peak there were some sixty cottages, bringing the hotel's total capacity to 800.

There were also laundries, staff houses, workshops, barns, a dairy, vegetable and flower gardens, as well as water systems and a mile-long sewer system that is still working. Gas was piped from a gas plant for lighting, and later the Paul Smith's Electric Light and Power Company built a small electric plant to supply the hotel and cottages.

Ferd Chase died in 1916, and his wife continued to run the hotel until 1931, when she lost it due to financial difficulties brought on by the Depression. The hotel continued in business until the early 1950s, when it was used as a summer camp. It burned to the ground on September 19, 1956.

Among the more famous visitors to the hotel were Oscar Wilde in 1882, and, in 1892, U.S. President Benjamin Harrison, whose wife suffered from tuberculosis; President Grover Cleveland came in 1895 and President William McKinley in 1897. 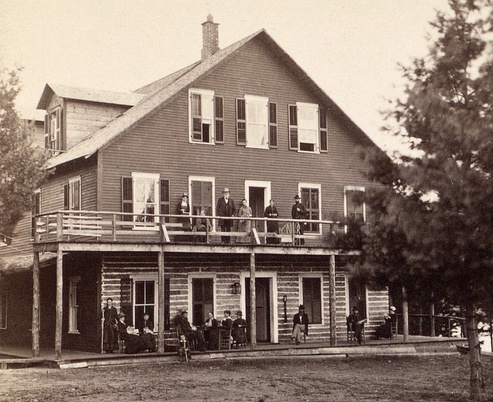 Titled simply "View of a Lodge," this is clearly the Loon Lake House again, but somewhat later.  Though both photos are labeled 1870 this would seem to be later-- see the siding applied over the original logs of the second floor.  Attributed to George W. Baldwin, but probably actually by George C. Baldwin.
The Miriam and Ira D. Wallach Division of Art,
Prints and Photographs: Photography Collection,
The New York Public Library.
The New York Public Library Digital Collections. c 1880. New York Times, June 27, 1897 (A pdf of the full article is here)

Loon Lake will be as inviting this season as usual. Its great hotel buildings, handsome cottages, spacious grounds, and romantic camps have been put in apple-pie order, and the whole will be under the control of the Loon Lake Company. Mrs. Chase and Charles Stevens will have charge of the inside management of the hotel, and "Ferd " Chase will look after the external affairs, as last season. The cottage at Loon Lake which was occupied by President Harrison's family a few years ago continues to be one of the show places of the Adirondacks... 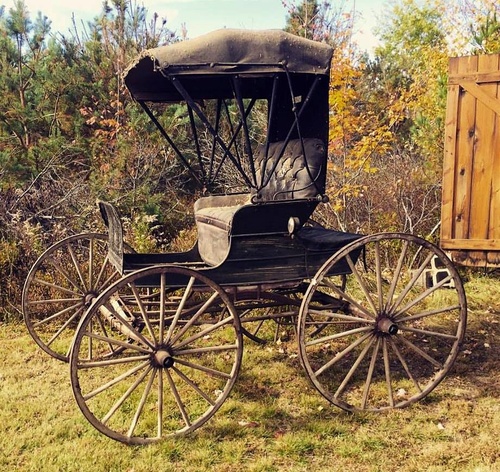 This carriage was bought from the Loon Lake House property in the 1960s by
John W. Hawkinson of Gabriels..  Courtesy of TheHawkeyeFarm 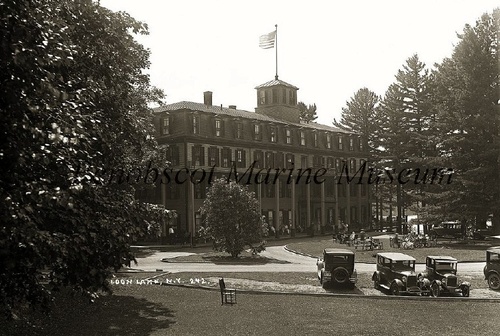 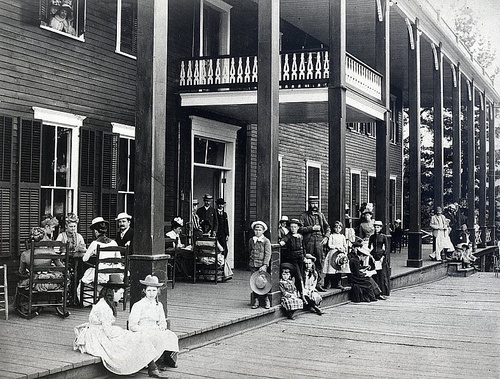 Loon Lake House porch, c. 1887
Courtesy of Adirondack ExperienceIn splendid contrast to these rude and primitive places, some of them merely small log cabins, both as regards the character of structure and of guests, is the Loon Lake House, which represents an investment of probably close to half a million dollars, and offers to sportsmen and pleasure seekers a class of entertainment nowhere surpassed in the Adirondacks. Mr. Ferd W. Chase came from Vermont in 1878, and erected a hotel which contained thirty-one sleeping rooms. It was opened to accommodate a few fishing parties in May, 1879, though the formal opening did not occur until the sixth of July. Its high number of guests in that year, on August first, was sixty-one. From that date to the present it has grown almost every season both in capacity and popularity, though in the first years taxing Mr. Chase's resources and credit to the uttermost. The property includes a tract of over four thousand acres of land, a main hotel building of imposing appearance and large capacity, two annexes, a number of cottages, boat houses, etc. In addition there are a number of privately owned cottages adjacent, which are in effect a part of the establishment. One of these is reputed to have cost its owner no less than three hundred thousand dollars. How enterprising and unsparing of expense the management has been in seeking to make the hotel perfect in all its details is shown by the improvements that it has provided. There is a private acetylene gas plant for lighting the place; a system of water supply having a head of one hundred and twenty-six feet, with two mains leading from a pure spring to the hotel and other buildings, in which there are stand-pipes and fire-hose always ready for use in case of emergency. Even greater care has been had to provide safe and scientific sewerage. The sewage is carried to the hotel farm, located the other side of a hill three-fifths of a mile away, through two lines of twelve-inch tile that are laid through a tuunel which at one point is ninety-two feet deep. This tunnel alone cost five dollars a lineal foot for driving through earth and ten dollars through rock. There are golf grounds, a tennis court, pool and billiard parlors, a bowling alley, a livery containing horses and carriages and automobiles, and almost every other accessory for entertainment of visitors. The grounds are beautifully kept, and the same purpose to give guests the very best that can be provided is manifest within the house, as without. The table leaves nothing to be desired, and the service is up to the highest standard. The hotel, annexes and cottages will accommodate five hundred guests or more, and so admirably is it managed that the problem never is how to fill it, but how to care for all who apply for rooms. Mrs. Chase's personality, energy and executive genius are in no small measure responsible for the success and popularity that the house enjoys. The hotel and hotel farm employ about three hundred persons.

A twisted maze of smoldering rubble was all that remained this morning of the Loon Lake Hotel, the famous hostelry which has been an Adirondack landmark since 1879. 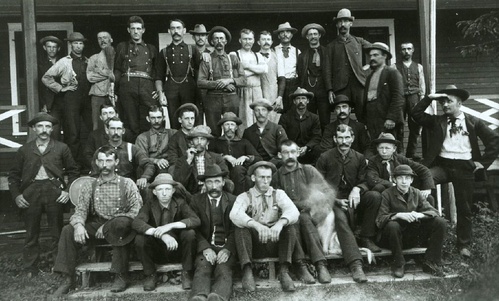 Loon Lake House, outside help, c. 1887
Courtesy of Adirondack ExperienceThe loss was estimated at $500,000 by Irene Miller, secretary-treasurer of Andron Resort, Inc, owners of the hotel.

Firemen from the Bloomingdale department were still on the scene today after an all-night battle to save adjacent buildings which were threatened by the inferno caused by the complete destruction of the main 5-story building.

The huge rambling 100-room resort hotel was a monument of flames as Bloomingdale's fire department, first on the scene at 12:45 a.m. with 22 volunteers, laid their hose lines.

Shortly after, the Saranac Lake and Lake Placid departments arrived with rural equipment and pumpers. The Post Office building had been scorched by the searing heat from a blaze which could be seen for 15 miles.

Loon Lake Hotel - Part of the Garage;August 1916.
Courtesy of Adirondack ExperienceThe heat from the fire twisted steel and melted the enamel on bathtubs and other bathroom fixtures. Flames still crackled menacingly in the substructure and a haze of smoke could still be seen from Vermontville, some 9 miles distant, this morning.

Firemen said that the building was completely consumed in a matter of minutes when a breeze from the lake fanned the flames which roared through the completely wooden edifice. 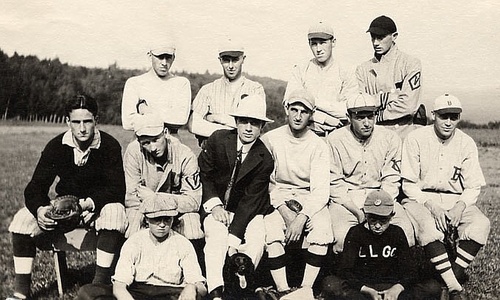 Men from the telephone company and forest rangers remained this morning to check phone lines and prevent any spread of the sparks into the woods nearby.

Workmen had been repairing roofs at the rear of the structure this week. The main buildings were in the process of long-range renovation in an attempt to bring the hotel back to its former renown as a tourist mecca in the Adirondacks. 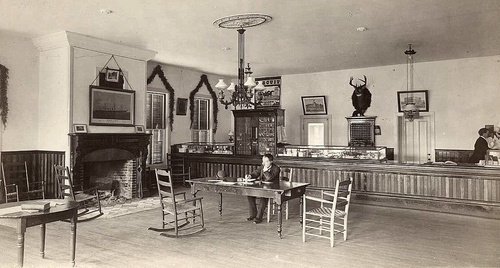 Loon Lake House office, c. 1880
Photograph by S.R. Stoddard
Courtesy of Adirondack Experience
The hotel was built by Vermonters Mr. and Mrs. Ferdinand W. Chase and operated by them until 1916 when Mr. Chase died. Mrs. Chase then carried on until the hotel was sold in 1937.

There are about 50 buildings surrounding the main hotel area which is located on Route 99.

Cause of the blaze was not determined. Local residents said the hotel was at one time known as the "Tammany Hall of the North Country." 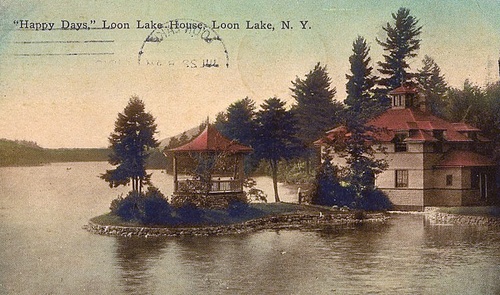 Postcard of Happy Days, 1912
Courtesy of Adirondack ExperienceThe hotel had been closed for two weeks before last night's fire. The Bloomingdale firemen were led by Chief Robert Stephenson, the 20-man Lake Placid complement of firemen was led by Chief Harold Darrah, with Saranac Lake's Chief Vernon Wamsganz directing the volunteers from this community.