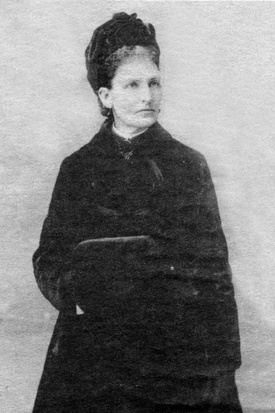 Died: November 5, 1891, the daughter of Hugh Martin and Sally Goodell

Lydia Helen Martin Smith ran Paul Smith's Hotel with her husband Paul Smith. Many of her personal letters are in the collection of the Franklin County Historical and Museum Society; see a link at the bottom of this page.

From the Adirondack Daily Enterprise, August 21, 1993

The much-asked question: "Who is Lydia, anyway?"

Lydia's at the Hotel Saranac is a popular dining spot featuring culinary preparations which, under proper guidance, have been cooked and served by students of Paul Smith's College. Many tourists, and perhaps a few local residents, might wonder about the source of the name which was applied to the dining room. It is, indeed, a fitting application which reflects directly to the Paul Smith aura. In fact, Lydia had much to do with the legendary success associated with Paul Smith and his fabulous hotel.

Lydia Martin was born in AuSable Forks on Aug. 29, 1834, one of 11 children born to Hugh and Sarah Martin. The Martin family later moved to Franklin Falls to manage the Franklin House, a hotel owned by Peter Comstock and which place was destined to play a vital role in Lydia's future. Prior to her coming to "the falls," she had graduated from the Willard Seminar in Troy.

Earlier, in the month of May 1852, a disastrous forest fire had completely wiped out the sawmill settlement at Franklin Falls and the proprietor, Comstock, was in the process of rebuilding. After getting his mill back in operation, Comstock immediately constructed a new hotel and it was to this place that the Martin family arrived. While this was happening, some eight miles to the north, at Loon Lake, an immigrant guide from Milton, Vermont, was building a small hotel which he named Hunters' Home. This was Paul Smith's first venture in the hotel business.

One day, with a group of friends, Lydia traveled to Loon Lake to attend a dance, which had been planned for some time. Also present at the affair was Paul Smith who, once he had set eyes on Lydia, claimed her for every dance. Paul was apparently smitten by both her good looks and her charming demeanor while Lydia, in turn, was impressed with this handsome young man. It was the beginning of a romance that would endure for the next 40 years.

Encouraged by some of his wealthy clients at Hunters' Home, Paul was able to acquire a better site on Lower St. Regis Lake and immediately began construction of a new hotel. All during the building periods Paul spent his Sundays visiting Lydia at Franklin Falls. This was no easy courtship since he had to walk some 18 miles to reach his beloved and then walk back over the same route. During that first winter he covered the distance on snow shoes!

In the summer of 1858 Paul opened his new hotel and the venture was an immediate success. Many of his former guests from Hunters' Home came with their families to spend vacations on the Lower St. Regis. Encouraged by the rapid popularity of Paul Smith's Hotel, the 34-year-old entrepreneur decided to pop the question. Lydia accepted and the two were married in the Franklin House on Sept. 5, 1859, and moved directly to the new hotel.

From the beginning Lydia proved to be a valuable asset to the fledgling establishment. She was an excellent cook, a prudent housekeeper, and her good education enabled her to become a proficient administrator while Paul handled the building projects and guiding activities. Paul was a "man's man," extremely popular with the male guests, who admired his hunting and fishing expertise, his story-telling ability, and his ever-present aura of good humor. By complementing each other's skills the pair made a combination that ensured the profitable operation of the enterprise. The original 17-room structure was destined to grow lo a 300-room complex and gain worldly recognition along the way.

Lydia continued to manage the establishment and went out of her way to devote considerable time to the well-being of her staff, their families, and any neighbors in need of assistance. She visited the sick and quietly saw that no destitute person went hungry. An example of her generosity took place during November of 1876 when a tragedy occurred at Fish Pond some 10 miles west of Paul Smiths. Two men named Clark and Newcomb were drowned while attempting to break shell ice with their boat, which overturned. A crew of volunteers went to the site to recover the bodies and, since there were no roads in the area, they were forced to spend the night in the woods during the return trip. Having had no food or shelter the men were cold and exhausted upon arriving back at the hotel. Lydia, who had been expecting them — although the hotel was closed for the season — had cooked a hot meal for the group, which was greatly appreciated. One of the guides, who was a member of the recovery team, later wrote an article for the paper expressing the esteem in which Lydia was held. He stated: "Mrs. Smith was a kind and sympathetic employer. Her servants all respected her. The charm of her dignity in the parlor entertaining guests or in the kitchen with her help made one and all feel her influence. Her generosity was unbounded and was applied in an unostentatious manner with no sting of display. She was a moving spirit in the up-building of the hotel and her congenial personal charm lent an atmosphere that made the place so attractive."

Over the years a dependable staff had been assembled, enabling Paul and Lydia to enjoy a little off season travel. Lydia's brother, Charles Martin, Jim Haney, and John Harding were among the trusted employees. During one of Paul and Lydia's trips to Florida for a winter's vacation they stopped at the Murray Hill Hotel in New York City. From there Lydia wrote to Henry, mentioning "I hope your cold is better." Apparently the cold developed into pneumonia and Henry died at the young age of 29. Lydia and Paul immediately tumed around to rush back to the hotel and attend the funeral, a sad day, indeed.

Naturally both parents were completely shocked and suffered deeply over the loss of their first-born, but Lydia didn't seem able to recover from the grief. She went into mourning and continued to pine until her own death occurred later that same year in the fall of 1891. Lydia's passing dealt a great blow to Paul and her two remaining sons. Phelps and Paul Jr. strove to lift their father's mood, which had left him in a deep lethargy, sensing the finality of Lydia s departure from his world.

Certainly Paul Smith was a great man. He began his Adirondack career as a guide at Loon Lake but went on to build his world-famous hotel, founded an electric company, a telephone company, an electric railroad and, in his spare time, served as supervisor of the town of Brighton and postmaster of the community. During all these achievements he never ceased to give due credit to Lydia and frequently claimed that she was responsible for his meteoric success. On his 85th birthday Paul was feted at a surprise party arranged by his host of acquaintances. As he stood to face the gathering he could only say, "I wish that Lydia could be here to see this."

There is no doubt but that Lydia also commanded sincere respect from all who had contact with her. Her staff at the hotel looked up to her and even the rough guides who passed through the St. Regis portals graced her with polite admiration. Her good works reflected an inner angelic quality that surfaced throughout a lifetime of helping others. Perhaps because she was most frequently referred to as Mrs. Paul Smith the christened name of Lydia was not as well known to the general public. Only those who were close to her used her given name.

Phelps Smith was the last family survivor and when he died on Jan. 17th, 1937, his will created Paul Smith's College. The college eventually acquired the Hotel Saranac to serve as a training center for those students who elected to study food preparation, hotel administration or hospitality courses a field that certainly relates to Lydia.

Should you be enjoying the congenial atmosphere at the Hotel Saranac dining room and notice the name of Lydia on the menu you might summon a student waitress and inquire, "So who is Lydia?" The response would be "She was one great lady!"