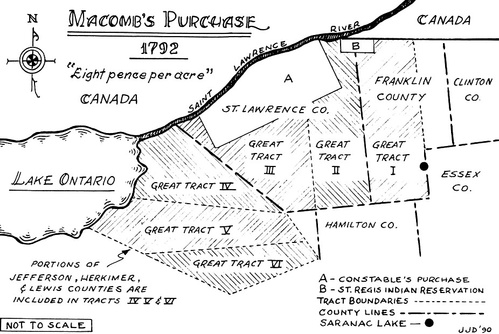 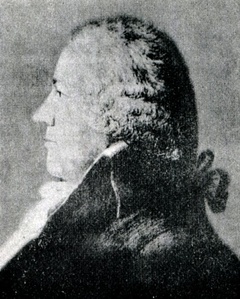 Macomb's Purchase was the 1791 sale of 12 percent of the New York State's landmass at eight pence per acre, ostensibly to one man, Alexander Macomb.

Alexander Macomb, Sr. (1748-1831), a wealthy merchant, bought 3,600,000 acres of upper New York from the state in 1791 for the equivalent of 12 cents an acre. From this one purchase are derived the deeds for all the lands that are now included in Lewis, Jefferson, St. Lawrence and Franklin Counties, as well as portions of Herkimer and Oswego Counties. William Constable and Daniel McCormick were silent partners to the deal.

The purchase raised a great scandal, and Macomb was subsequently ruined.

Many area residents, upon reading their property deeds, are familiar with an opening phrase that delineates the basic source for the geographical location of such property. The legal description begins with "all that tract, piece or parcel of land, situate in Great Tract One, Macomb's Purchase, Township No. 21, Town of Harrietstown, Franklin County," etc.

Among these many property owners who recognize the wording, there might be some who perhaps wonder who was this Macomb anyway. In a few words he was purported to be the instigator of the largest land purchase in the State of Now York.

Alexander Macomb was born in Antrim County, Ireland, on July 27, 17-18, the son of John and Jane Macomb of Scotch-Irish descent. His father, John, brought the family to America seven years later to settle in Albany.

Alexander had a brother, William, and a sister, Anne; he also formed a friendship with a boy in nearby Schenectady by the name of William Constable, a relationship that was destined to play an important role in the years to come.

In 1772 the Macombs moved to Detroit, Michigan where the two sons become dealers in the flourishing fur trade and apparently were highly successful in the venture. During trading trips down the St. Lawrence to Montreal Alexander took notice of the arable lands adjacent to the river valley. In the meantime his friend Constable had been active in land acquisitions in western New York and also in other eastern states.

While in Detroit Macomb was married to Catharine Navarre who could proudly trace her ancestry back to King Henry IV of France. The couple raised ten children, four eons., and six daughters.

One of the sons, General Alexander Macomb, commanded the land forces at the Battle of Plattsburg during the War of 1812. Two "Macs" proved to be too much for the British on September 11, 1814, when General Macomb on land, and Commodore Thomas Macdonough on Lake Champlain, defeated superior British forces. Macomb with only 4,000 troops faced Sir George Provost's army of over 14,000 regulars who had marched on Plattsburg from Canada. On the lake Macdonough aboard his "Saratoga" met Captain George Downie of the "Confiance" who led a stronger British force to do battle in Cumberland Bay. The combined land and naval American victories proved to be a turning point in the War of 1812. General Macomb also had a son, William H. Macomb, who served with distinction as a Union officer during the Civil War.

So much for his offspring. In 1785, with the fortune he had made in the fur trade, Macomb moved to New York City where he built an elegant mansion near Trinity Church at Broadway and Wall Street. When George Washington became president in 1789, he rented the house from Macomb for the duration of his stay in the city. Catharine Macomb had died only two months earlier and apparently Alexander was willing to vacate the house for the Commander-in-Chief of our very young nation.

In 1791, Macomb married Jane Rucker, the widow of John Rucker, who had been a partner of William Constable. This second marriage produced seven more children, three sons and four daughters. John, one of the sons, was married to Christina Livingston whose father, Phillip Livingston, in 1776 was one of the signers of the Declaration of Independence. While in the city Macomb consorted with those famous and wealthy merchants of that era by sharing commercial interests with such notables as Alexander Hamilton, Daniel McCormick, and Governeur Morris. The latter was one of the honorable authors of our Constitution. At the very peak of his business success he made the impulsive and grave error of becoming involved in a fraudulent banking bubble which burst in scandalous failure.

Oddly enough, the huge land transaction and the banking failure took place in the same year, 1792. Joined by Daniel McCormick and William Constable, Macomb made application to the state Land Commission for the purchase of nearly four million acres of land in northern New York. The proposal was accepted by the state at a ridiculously low price since the area was considered to be a wasteland of barren wilderness.

Known ever since as the "Macomb Purchase" the transaction proved to be the largest land deal in the state's history as well as the greatest land steal to have been perpetrated on the people of the Empire State. Naturally there followed cries of fraud and the land commissioners, Aaron Burr, and Governor Clinton were accused of connivance in the transaction. A full description of Macomb's purchase can be found in the N.Y.S. Forest Commission Report, Vol. I, page 79 for the year of 1893. It states that as of Jan 10, 1792 Alexander Macomb, associated with William Constable and Daniel McCormick, did purchase 3,934,899 acres extending over territory included in the counties of Franklin, St. Lawrence, Lewis, Jefferson, Oswego and Herkimer far the price of "eight pence" per acre. The lands were subdivided into six sections known as Great Tracts I to VI. The patents for IV, V, and VI were granted to Macomb on the above date while III was made out to McComick on March 3, 1792. Great Tracts I and II also went to McCormick on May 17,1798.

Although Constable was not named, he was certainly involved in the transaction. He was a man of considerable wealth. Born in Dublin, Ireland, he came to America in 1762 and served in the Revolutionary War on the staff of General Lafayette. After the war he managed a fleet of trading ships that sailed to Europe and the Orient bringing back cargoes of immense value which enabled him to invest in the huge land deals.

Daniel McCormick was also born in Ireland and upon emigrating to this country settled in New York City. He not only became very wealthy but was one of the most popular residents in the city with a host of influential friends. He was among the famous guests at a dinner to honor President Washington given by Mrs. John Jay. At one time McCormick was an alderman, a member of the Chamber of Commerce, and president of the Friendly Sons of St. Patrick. His home on Wall Street was the gathering place for the elite and frequent callers were, in addition to Macomb and Constable, Michael Hogan William Bell, and Richard Harison.

Macomb's prosperity was short lived due to the bank fiasco which landed him in debtors prison only four months after the big land deal. In order to recoup his losses he began to divest himself of his major land holdings in the north and on June 6, 1792, he turned over to William Constable practically all of Great Tracts IV, V, and VI. It is not quite clear whether this transaction was a hostile takeover or a friendly arrangement but from their former relationship it would appear that the latter was more likely to be the case. In any event, Macomb deserted his interests in the northern lands and transferred his attention to the metropolitan area of New York City. With this turn of events adding to his farmer holdings William Constable became the largest land owner in the state. Shortly thereafter he, too, began to unload some property and in slightly less than a year after the original purchase he sold more than a million acres to Samuel Ward.

Of primary interest to local residents is Great Tract No. I since it lies entirety within the limits of Franklin County. This tract was surveyed into 27 townships containing approximately 32,000 acres each. Names were given to those townships which were mostly related to the original members of the purchase or to regions of former fealty in Ireland or England. No. 1 was named Macomb, No. 2 Cormachus (for McCormick), No. 3 Constable, No. 8 St. Patrick, No. 18 Brighton, No. 21 Harrietstown, and finally No. 27 Tipperary. The intervening numbers were named for lesser known family members, associates, and locations. Harrietstown was, of course, named for Constable's daughter, Harriet.

To clarify any misconception between these townships and towns; a town is a subdivision of a county while a township is a subdivision of a town. To add to the confusion a hamlet or a village is frequently called a "town." In the case of Harrietstown and Duane both were names applied to the early townships and later, when the county was divided into towns, these names were given to the much larger towns. Also surviving this transition period are the towns of Constable, Malone, Moira, Bangor, and Brighton. Constable was, of course, named for William Constable as also was the village of Constableville in Lewis County. Duane was named for Major Duane who married Constable's eldest daughter, Harriet.

Today those earlier township names are mostly forgotten but the original 27 township numbers are still in use. On the current state land maps, Macomb's Great Tract No. I, the townships are so designated. The townships are further broken down into lots which also receive a number. For example, should you live in Lake Clear, the complete legal location (according to size) could read State of New York, Franklin County, Great Tract No. I Macomb's Purchase, Township No. 22, Lot No (given).

So much for the civil divisions. Getting back to our main character, when Macomb returned to New York City, he had apparently managed to recoup his losses. In 1798 he purchased 100 acres in the Bronx across the Harlem River from the northern tip of Manhattan and here he built a fine stone mansion. Two years later he built a large gristmill on Spuyton Duyvil Creek which seemed to be his swan song in the field of financial speculations. His son, Robert, joined him in the Bronx venture but then he also went broke and lost the property. In 1621 Macomb, at age 73, went to live with his son, General Alexander, in Georgetown. After his victory in the War of 1812 Alexander had advanced to become Commander-in-Chief of the U.S. Army and he invited his aging parents to come to Georgetown, D.C., and stay with him.

Alexander Macomb died at Georgetown in 1831 but the "Macomb's Purchase" lives on forever. Today his name is appearing in all of the property deeds being recorded in each of the six Great Tracts of northern New York, and those of us who reside in the Town of Harrietstown owe our allegiance to Great Tract No, I.