Madden's Livery, undated Madden's Transfer and Storage is a business, established by William F. Madden, Sr. in 1914, now located at the former New Curling Rink, which he bought in 1944 to expand his storage facilities. The firm had previously operated from the site of the original Dew Drop Inn on Broadway. An advertisement in the program for the St. Bernard's Club's Minstrel Review, circa 1930, lists the business at 12 River Street and lists "Packing, Crating, and Shipping Anywhere, Anyplace, Anytime." Also, "Sun Lamps and Piano Moving." Madden's also owns the Tousley Building on Main Street. 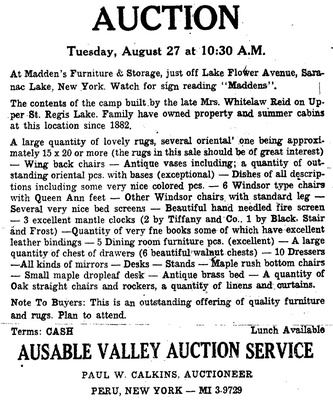 Ad for an auction of the furnishings of the camp of Mrs. Whitelaw Reid at Madden's, (Adirondack Daily Enterprise, August 21, 1963)

The love and laughter of life runs deep in this extraordinary lady; runs deep, and flows out in merriment and a common-sensible outlook - and in the brilliant administration of the business of transferring people's belongings to where they want them moved when they want them moved.

Her roly-poly face, framed in soft, wavy grey hair, reveals a roly-poly heart. Her ready laugh and easy-going manner conceal a mind of depth and clarity.

She is Mrs. William F. Madden, Sr., of Madden's Transfer & Storage, established in 1914, and specialists in foreign and domestic packing, crating and shipping.

She can quote the moving rate from one town or state to another in any of the 14 states in which the firm is licensed to operate. This, despite the intricate and sometimes baffling-regulations of the Interstate Commerce Commission. She does all the estimating herself.

"My husband was born right here in Saranac Lake. He started as a shipping clerk in Leonard's Store. He learned the art of packing and crating thoroughly. And he learned it so thoroughly that, when he went in business for himself, in the rooms where Dewdrop's now is, people came to him to move their belongings because they trusted him. They knew their goods would arrive safely. He did all sorts and kinds of packing and crating. He was a genius at it. Why, once he sent a whole household of goods all the way to Istanbul, in Turkey. And the people wrote back that the only thing damaged was the rung of a rocking-chair!

"He's retired now since 1959 but is still active and able to get in the fishing he loves. He started with a horse and sleigh and then got a model T Ford. That was back in the old days when the winters were terrible. He packed and shipped for TB patients and others to places all over the world. His reputation grew, until now we employ 20 people, have 20 trucks, tractor-trailers, utility trucks, flat-bed and low-bed trucks, and can take care of anything."

We were sitting in the large, airy, panelled outer office. The mantel over the huge fireplace was crowded with photos of vintage trucks and people commemorating past triumphs of hauling. A couple of stuffed mallards looked down and seemed ready to quack and take off.

Mrs. Madden's tan, handsome son, Bill, Jr., sat at a nearby desk, one ear at the very busy phone taking orders, the other listening to the conversation. The attractive and highly capable secretary, Miss Kathleen Hammond, moved briskly about her duties. "Please excuse the dirt on this floor." Mrs. Madden pleaded. "We've just finished a meeting and the men tracked it in and there hasn't been time to clean it up." She was begged not to give it a second thought, and asked to continue.

"Well, I was born in Norwood, N. Y., about 75 miles from here. I was Marion Catherine Lynch. After graduating from high school, I came to the Lake Placid to work and soon was in charge of the dining rooms. I met and married Bill – Mr. Madden, that is - and we have three wonderful children, Bill, junior here, and two girls. Helen, now Mrs. Raimondi. and Catherine, now Mrs. Bola. Both husbands are in the business. And, of course, so is Bill."

Asked what the firm moves. Mrs. Madden exclaimed, "What don't we move? We once moved a truckload of butterflies. We've hauled over a million and a half pounds of missile parts.

[The remainder of the column is illegible.]

Moving is their business

SARANAC LAKE - A subtle, but steady population shift is taking place in the North Country. The people who are moving away in search of better paying jobs are numerically more than replaced by new residents, fleeing congested urban centers.

It is the view one gathers surveying the economic landscape from the vantage point of the dispatcher's desk at Madden's Transfer and Storage, the area largest moving company.

"I've been married to this business for 52 years, so I ought to know a bit of what's going on," Mrs. William Madden Sr., the dowager of the North Country's foremost transportation company said resolutely.

Mrs. Madden, and her son, William, the president of the moving company, have a strong hunch, founded on past experience, that in spite of recent economic reverses, as the closing of the Will Rogers Hospital and the Ray Brook Rehabilitation Center, the North Country will not suffer a population decline or long lasting economic hardship.

"Of course, both occurrences are unfortunate and very tough on the people losing their jobs," said William Madden thoughtfully and with empathy, "but we have experienced here in the past similar hardships. Take for example the closing of the Trudeau Sanatorium. In time, however, it was replaced by the American Management Association outfit. The task is now for us as a community to do our very best to help to find and attract suitable replacements for the closed institutions."

The kind of replacement is open to dispute, but Mr. Madden disagrees strongly with the often voiced argument that inadequate transportation to and from the Adirondacks is standing in the way of attracting, for instance, light industry to this area. "It's nonsense," he said, "industrial firms operating in Tupper Lake have no transportation problems to speak of. Fright companies who do work here are looking for loads to take out. We alone have operating licenses in 12 northeastern states and are ready to haul anything, anywhere."

Moving anything that possibly can be moved is a long tradition with the Maddens. Grandfather Madden was a teamster who hauled lumber in horse drawn wagons. His son, William, motorized the company in 1914 with a model T Ford, specializing in packing, and moving the belongings of TB patients who were arriving in ever larger numbers at Saranac Lake for a cure.

Today the Madden's Transfer and Storage Co. is equipped with 24 power units, and 26 trailers, employing on the average 25 people. Its warehouses and storage vaults hold people's belongings ranging from industrial equipment to furniture to valuable furs. Although a good share of Maddens business is conducted with large industrial companies as the New York Telephone Co., Western Electric, the American Telephone and Telegraph Co., the Niagara Mohawk Electric Co., the New York Gas and Electric Co., the OWD Co. in Tupper Lake, and many others, about 60 percent of its business is "moving people."

"That's what gives us an insight into the population trends in the North Country," said Madden. "During the past couple of years we have moved dozens of families here from places around New York City and New Jersey. Some of them were retired people but also many young families. They wanted to live here and in spite of economic and job difficulties apparently have found the means-and the way to do so. I am convinced this trend will continue, no matter what."

"Moving on," the popular TV series describing the hair raising adventures of long-haul truckers, may be quite exaggerated, but is "not without any foundation," asserts Mr. Madden. "Thank God no truck of ours has ever been hijacked yet, as happens regularly on the show," continued Madden, "but we have had our share of interesting episodes too."

No wonder, considering that for instance Madden's and the New York Telephone Co. have maintained a close business association for over 48 years. "Whenever there is an emergency caused by storm, floods or fire, our trucks and equipment are part of the service restoration effort. We are on call 24 hours a day and go wherever we are needed," said Madden matter-of-factly.

Even to a mountaintop to retrieve a crashed airplane? Some four years ago just such a job was undertaken by Maddens when a four engine jet belonging to billionaire Howard Hughes crashed into Johnson Mountain, killing three people. In the operation, lasting about a month, Madden's had to build a mountain road to the crash site and retrieve the wreckage.

"This business of ours with all its excitement, problems and challenges gets into the bloodstream. You suddenly realize, you can't live without it," said Mrs. Madden, 78, officially the treasurer of the company, but in reality, however, fulfilling jobs from dispatcher to telephone operator.

How she conducts her business was illustrated recently when a visitor to the office overheard the following conversation:

"Bill, for goodness sake, pick up the phone she shouted impatiently toward the adjoining office. "Nelson Rockefeller is on the line."

This time it wasn't the Vice President on the line, but it could have been. A branch of the Rockefeller family having an estate in the Adirondacks is an old and good customer of the Maddens.