Main Street runs north from its junction with Lake Street and Kiwassa Road at the Lake Flower dam. It bends to the east at its intersection with Broadway, and continues a block past Church Street, where it becomes Dugway Road shortly before ending at Pine Street. It is one of the earliest streets in the village. 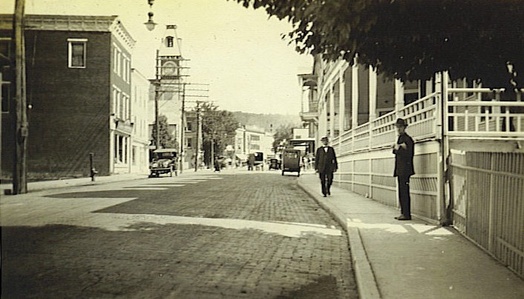 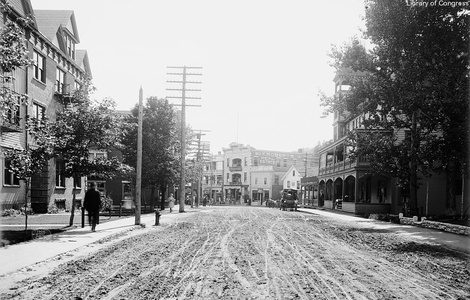 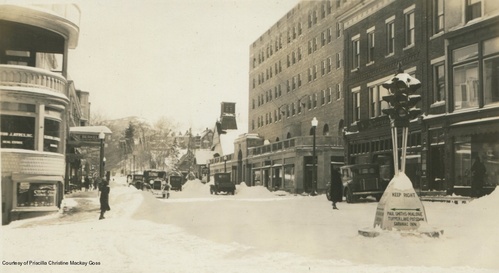 Looking north on Main Street from its intersection with Broadway, 1930s 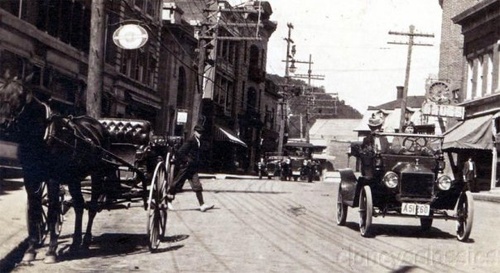 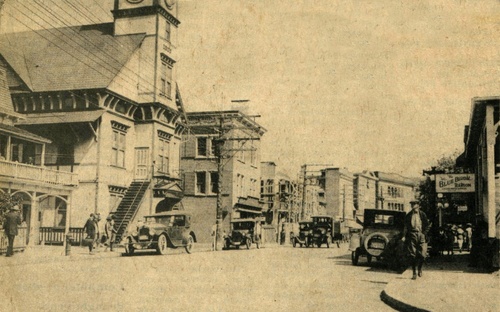 Main Street at the corner of River Street, from left, the porch of the Empire Hotel, the old Town Hall, Walton and Tousley, the Tousley Building apparently under construction, Little Joe's, the Donaldson Block, and the Haase Block are all visible. The sign for the Blue Bird Tea Room can be seen at right. (c. 1924) (Adirondack Daily Enterprise, undated clipping) 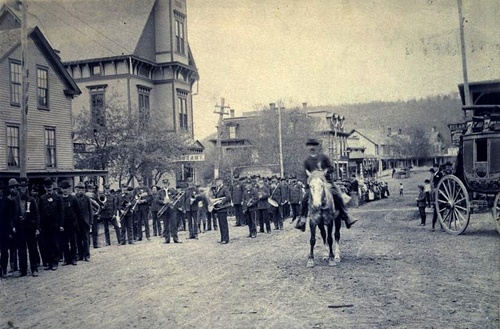 View from Main Street at the foot of Lake Street, 1930s 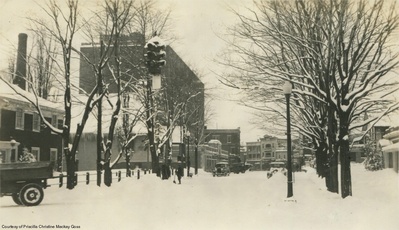 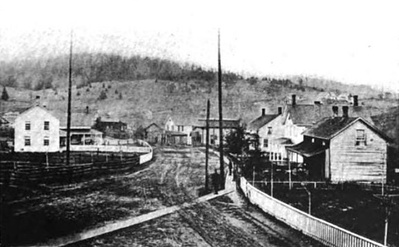 Main Street from the top of Berkeley Hill, 1879. Evans Cottage is on the left. Photograph by George W. Baldwin from Alfred L. Donaldson's A History of the Adirondacks 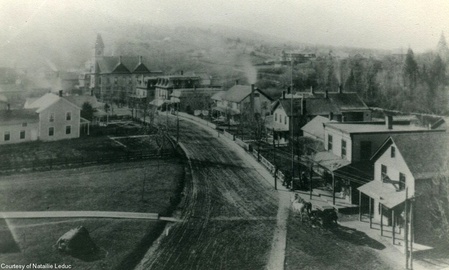 Main Street near the start of Broadway (from the Berkeley House)

The text below is from a caption published for the picture above at right by the Watertown Times in 1948. For information on the caption, see Old Saranac Lake photographs

SARANAC LAKE ABOUT 1900—Looking up Main street from the Berkely Hotel, a photographer, thought to be George Baldwin or William Adams, captured an early morning scene from the top balcony of the Berkeley Hotel on Berkeley Square.

The building on the extreme right served the village as its post office for many years. Today it houses the Horton Flower shop. The horse and buggy in front of the building is the Trudeau Sanatorium bus which carried people and supplies to and from the famous sanatorium. The house and buggy bus has been succeeded by a new station wagon in 1948.

The long white building on the left, the Lute Evans cottage, was one of the first tourist homes in Saranac Lake and for many years the late John D. Rockefeller, Sr., stayed in the Evans House during summer vacations. Next to the postoffice is the original Kendall pharmacy. Built by Dr. Frank E. Kendall in 1893 after he left the employ of F. M. Bull who operated the first pharmacy at 18 Main street. Still the Kendall pharmacy the building has been remodeled and modernized.

The cottage beside the Kendall building today houses the T. F. Finnigan Clothing company. The two houses that follow and face on Main street were known as the Rube and Rant Reynolds houses. They were used for many years as tourist houses and today serve as the site for many buildings including the Adirondack Enterprise the Adirondack National Bank and Trust company, the Federal Savings and Loan and others.

In the rear left center of the building can be seen the original Harrietstown town hall which was replaced by the modern town hall after fire razed it in 1926. The original site of the Adirondack Daily Enterprise, the fire allegedly started somewhere in the shop of the newspaper late in the evening. The publisher of the paper, John S Ridenour, printed the paper in Malone while his equipment was being salvaged.

Along with completely destroying town records and the newspaper office, the fire also destroyed much property belonging to the Odd Fellows lodge who also held their meetings in the building. 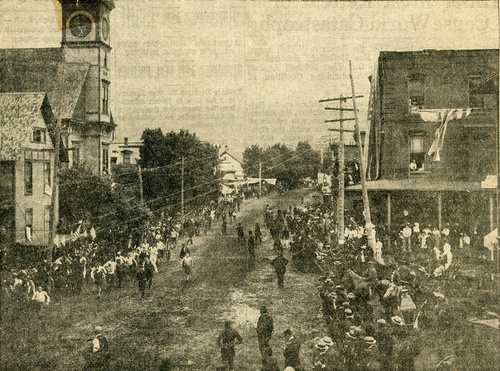 Highlight of the Saranac Lake celebration of July 4, 1892, was the firemen's parade pictured above [left]. The photograph was taken from a point on Main street now the site of Riverside park. The fire team is racing in a direction away from Berkeley Square and is passing the old town hall. Berkeley Square cannot be seen as Main street turns to the right just before the Square.

The wooden town hall of this picture was completely destroyed in 1927 by fire. It was later replaced by the imposing brick structure of today. In 1892 there was no town clock in the town hall tower. Today there is one.

At the left foreground is the residence of Judge Seaver A. Miller. The entire length of Main street has been changed by construction of modern buildings and the extension of the business section to the neighborhood of the town hall. Then, as now, Berkeley Square was the center of the shopping district.

In the background may be seen one of the many surrounding mountains overlooking the village. 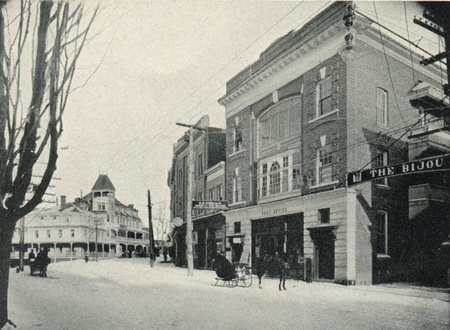 Main Street, c. 1909; the Post Office Building and the sign for the Bijou Theatre, at right, c. 1902 (From Saranac Lake in the Adirondacks: The North Woods City of Health and Opportunity, Mid Winter Carnival, 1909. Courtesy of the Adirondack Research Room, Saranac Lake Free Library) 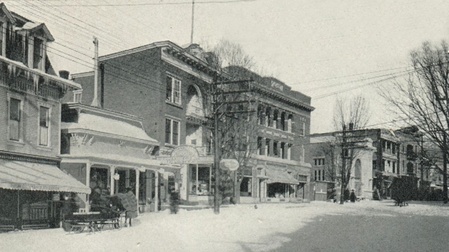 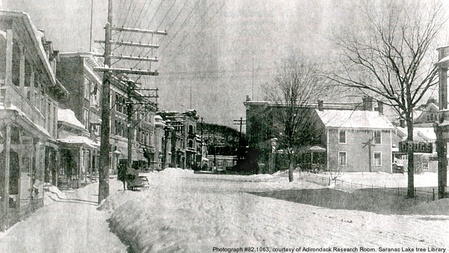 The wooden buildings of Saranac Lake's earliest commercial district had open porches that were later enclosed. The one-story building with snow on the roof is now the Post Office Pharmacy. Beyond it, the facades are still familiar today, though the poles and wires are not. On the right side of the street was Mrs. Lucius Evans Cottage, later replaced by the store that is now Sears. The sunny open space was the lawn of the Linwood Cottage, and far right are the open porches of what is now the Adirondack Artists' Guild. 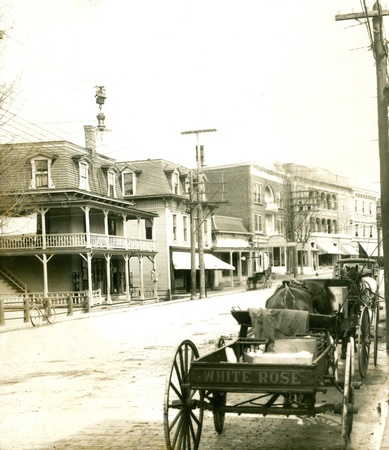 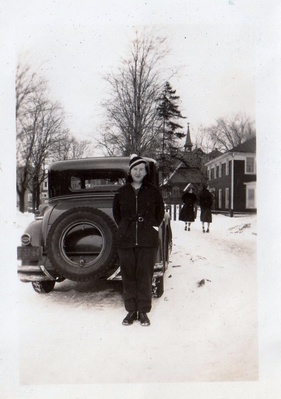 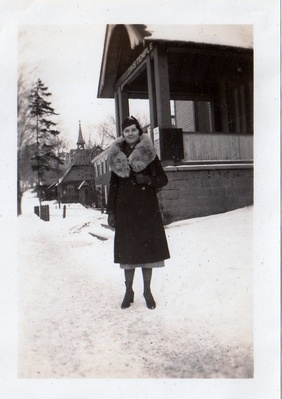 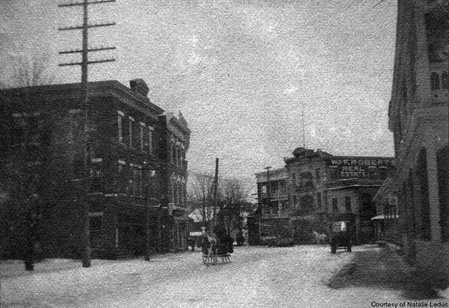 Main Street near the Berkeley, looking south, undated, but post-1900 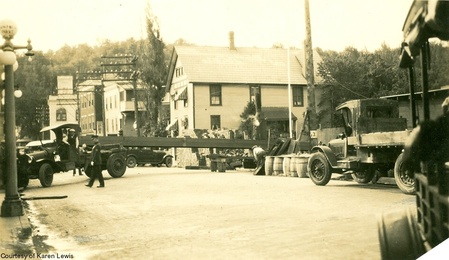 Steel beams being delivered for the construction of the new Harrietstown Town Hall, c. 1927. Bricks are stacked behind, and barrels, possibly of rivets, line the sidewalk. From left, the Paul Smiths Building, Currier Block, 16 Main Street and Seaver A. Miller Cottage can be seen.

Looking east along Main Street, Saranac Lake, from the middle of Berkeley Square, this unusual view captures the relationship of the Berkeley Hotel on the left and the first Saranac Lake High School on the right. The church tower next door to the school belongs to the original First United Methodist Church, which occupied a lot that is now the parking lot of the Hotel Saranac. Based on the size of the high school, which would be expanded twice later on, this William L. Distin photo can be dated between 1890 and 1902.

There Have Been Some Changes Made ...

The last time I sent a telegram I realized that when I first came up here—back in the late thirties —that the Western Union Office was in Berkeley Square, where the C.C. Commo Shop is now. There also was a Postal Telegraph and, if I recall, it was in the store now occupied by Charlotte's Little Shop. Next to that (where Meyer's Drug Store is now) was the Grand Union and farther down Main street (along about where Mike and Sandy are now) was the Albany Market. Across the street (G. Carver Rice) was Walton and Tousley, and where the Ayres Real Estate Agency is now was E. L. Finnegan's Shoe and Clothing Store. (Right?) I don't know what brought this on. I guess towns change like people's faces and there probably are a lot more that I would think of if I could concentrate. Right now I'm trying to remember what stood on the present site of the Thompson Building. Maybe someone can help me out. 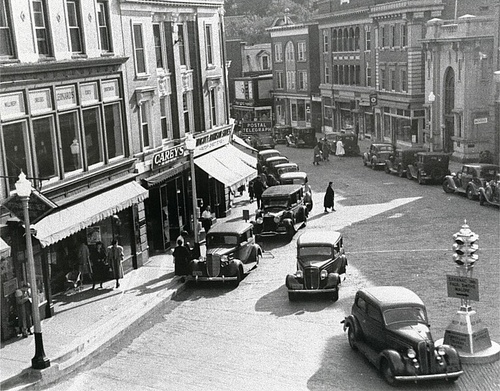 Similar to the view at left, only taken from up in the Berkeley.
Photograph #06.218 courtesy of the Adirondack Research Room, Saranac Lake Free Library 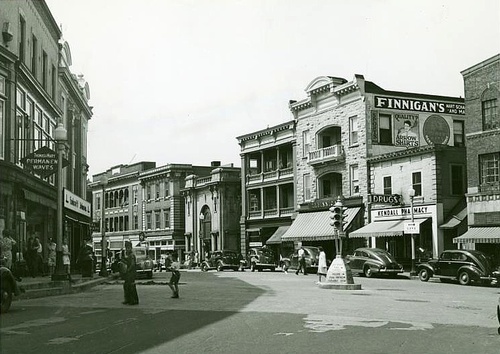 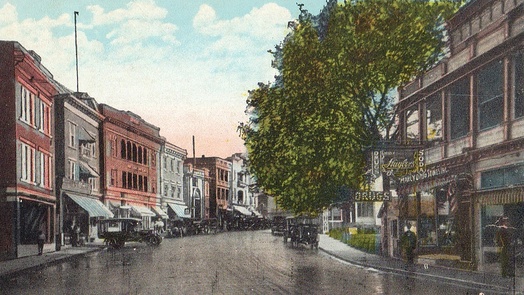