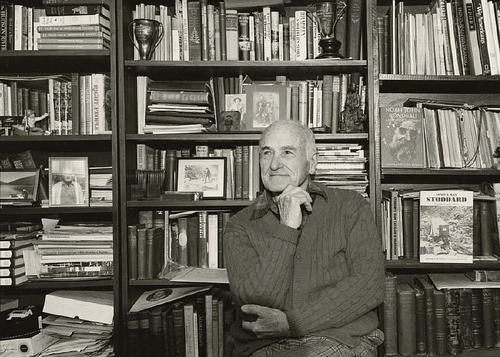 Maitland DeSormo in his library, c. 1986
Courtesy of the Adirondack Experience 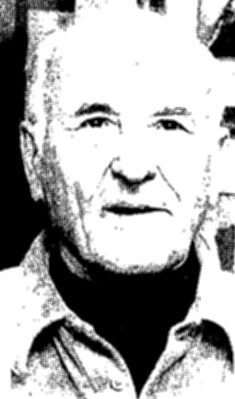 Maitland DeSormo was an historian and an author.

Born Aug. 26, 1906 in Canton, he was the son of George J. and Ida (Kennedy) DeSormo. He grew up in Malone and graduated from Franklin Academy, where he won a Regents Scholarship. He was also a recipient of a Carnegie Scholarship to Hamilton College.

Besides a master's degree from New York University, he did additional graduate work in speech and drama at Columbia. His teaching career in these subjects and English covered nearly 40 years. He was also a track and football coach for many years.

After Army service in World War II, Mr. DeSormo became the owner of extensive Stoddard and Adirondack Collections which became the core of the "Adirondack Yesteryears," a business he and his first wife, Sue, ran for many years.

Mr. DeSormo was a prolific writer, and published 75 articles in 10 of the nation's most prestigious publications. In addition, he wrote 20 Orientation Articles for the Adirondack Museum and has also logged 385 TV radio and slide show programs, plus participated in numerous autograph parties across the United States.

He was the author/editor of several books on the Adirondack area — "Told Around The Camp Fire," "Noah John Rondeau, Adirondack Hermit," "Old Times in The Adirondacks," "Seneca Ray Stoddard," "Heydays of the Adirondacks," "John Bird Burnham," "Summers on the Saranacs," "Joe Call, the Lewis Giant" and "The Murray Rush."

He served as the historian for the town of Harrietstown, and was past president of the Lake Placid-North Elba Historical Society. He was also active in the Adirondack Mountain Club; the Adirondack 46ers and the Wilderness Society.

St. Lawrence University recognized him with, both its North Country Citation and an Honorary Doctorate.

Further recognition came in 1984 when he was given the Award of Merit by the American Association for State and Local History. This is the most prestigious honor available to Canadian and American historians.

He was predeceased by his first wife, Sylvia Anderson DeSormo, and a daughter, Beverly, two brothers, Leland and King, and two sisters, Marion and Kathleen.

Funeral arrangements are in care of the Fortune-Keough Funeral Home in Saranac Lake. There will be no calling hours. Services will be held at the convenience of the family. Interment will be in the DeSormo family lot in Morningside Cemetery in Malone at a later date.

Memorial donations may be made to the Saranac Lake Free Library in care of the Fortune-Keough Funeral Home.

“Old Times in the Adirondacks” Exhibit in Etown

An exhibit, “Old Times in the Adirondacks" recently opened at the Adirondack Center Museum in Elizabethtown. The exhibit recreates a tour of the Adirondacks taken exactly a century ago by Seneca Ray Stoddard, a Glens Falls photographer.

In September 1873 Stoddard, together with his brother-in-law, Charles Oblenis, set out to record the Adirondack wilderness by camera and by diary. Stoddard subsequently used this material to fill his popular guidebooks of the late nineteenth century.

Using Stoddard photographs and excerpts from the trip diary, the exhibit retraces their route through the region - from Port Kent steamer dock via stage-coach to Keeseville, Ausable Forks, Wilmington, North Elba, Paul Smiths and Saranac Lake; thence by guideboat over the Saranacs, Raquette River, Long, Forked, Raquette and Blue Mountain Lakes; finally by foot to the deserted village of Adirondac, through the wild Indian Pass, along the Old Military Road to Keene, then Keene Valley, guided by “Old Mountain” Phelps through the Ausable Lakes, and out of the wilderness at Root's Hotel in Schroon River.

All Stoddard material has been loaned by Maitland DeSormo from his Saranac Lake shop, ''Adirondack Yesteryears.” DeSormo purchased the extensive Stoddard collection from Stoddard heirs and has used it to illustrate several of his Adirondack Region Publications.

The exhibit takes its name from the book which DeSormo issued in 1971, being Stoddard's narrative on this 1873 adventure.

Members of the Museum's sponsoring Essex County Historical Society were invited to preview the exhibit on Friday evening, August 31. Mr. DeSormo was on hand to talk with members about Stoddard and to exchange notes with older residents who recalled some of the now gone hotels photographed by Stoddard.

During the evening more contributions were received for the Harry MacDougal Fund to renovate the museum auditorium. The Society allocated the proceeds of a recent sale from the museum collection to this fund so that it now stands at $1000 with a goal of $1500 to be raised by October 1. Members and friends of the Historical Society may mail contributions, designated for the Essex County Historical Society MacDougal Fund, to the Adirondack Center Museum, Elizabethtown. All contributions are tax deductible and acknowledgments will be given all donations...