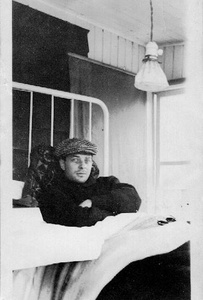 A brick at the Saranac laboratory has been dedicated in the name of Manolo Benero by Historic Saranac LakeManuel ("Manolo") Benero was born November 19, 1888 in Puerto Rico, the son of Fidel and Louisa Guayta Benero. 1 A handsome, outgoing, and affable man, he was remembered for his appealing smile. He was a man of slight build, fair skinned and blue-eyed from his Spanish ancestry. Suffering from tuberculosis, he came to Saranac Lake at the age of 28 on April 24, 1917. He stayed at 31 Franklin Avenue, known as the "Bide-A-Wee" cure cottage, which was run at that time by Frieda Cook. 2 After a few years, Manolo's health was much improved, and he began working locally as a surveyor.

In the 1920s, Manolo met the Gordon family from Cuba, and fell in love with Pilar, a beautiful young woman with striking blue-green eyes and reddish brown hair. In 1925, Pilar was 25 years old and residing at 300 Broadway with her mother, Josefa and her younger sister Isabel Gordon, who was suffering from tuberculosis. 3 The Gordons were a prominent Cuban family with Scottish and French roots. Pilar's father, Antonio, was a very famous and repected physician in Cuba.

Pilar and Manny married in the twenties. Unlike the vast majority of Latin American visitors to Saranac Lake, the couple chose to stay and raise a family in the Adirondacks. One might suppose that one reason the couple stayed was for Manolo's health; the infrastructure of the town probably gave him a sense of security in the case of a recurrence of the disease. Also, with their families from two different places, making their home in Puerto Rico or Cuba would have meant choosing one family over the other.

The Beneros lived at 15 1/2 Dorsey from 1932-33, and then 30 Neil Street from 1934-37.4 In 1938 the family moved to a modest brick home at 34 Virginia Street, and lived there until 1965. As the years passed at 34 Virginia, Manolo and Pilar's lives became tightly woven into the local community and into the Spanish-speaking world as well. They were active in the spaces in the community where Latin Americans and Anglos crossed paths, attending Spanish club get-togethers, fundraisers, parties put on by Alfredo Gonzalez, and other Saranac Lake Study and Craft Guild functions.

According to the eldest son, Manny Jr., his father and mother knew virtually all of the Spanish speakers that came through town, because "through the old saw 'Be sure and call on Manolo and Pilar' they met them all." The majority of the Spanish-speaking patients were from Cuba, and many of them were friends of Pilar's father, Dr. Antonio Gordon. The youngest son, Joseph, remembers that Arturo Alemán (the prominent advisor to Batista who stayed at the Gonzalez cottage) was a close friend of Pilar's mother and the family, and he frequently visited the Benero's house.

The vast majority of the Latino patients in Saranac Lake were from well to do families, and since their families and friends had the means to travel, they often had visitors. The Benero family hosted a number of relatives and friends who visited regularly from Puerto Rico and Cuba. Lolita Canto was a friend from Santiago de Cuba, who cured with Pilar's sister in the twenties and frequently came back to visit the Beneros. Joe remembers the get-togethers of family and friends, saying, "They were great fun, noisy and always political. I don't think that you can get two Latins together without a passionate political discussion. I was always amazed at their ability to talk and listen at the same time."

Some of the Beneros' visitors became active in community activities and in their own way worked to bridge the two worlds of the natives and the Spanish speakers. The Benero's vivacious cousin, Gracie Fresneda came up and taught dancing for a summer. Pilar's sister, Isabel, and her mother, Josefa, came to visit each summer. Josefa came with the intention of shoring up the family's Cuban roots, and she refused to speak English so that her two grandsons would keep up their Spanish. Isabel did the mixing in the community, conducting classes in Spanish, French and the violin at the Guild. She also took classes there and learned woodcarving. She made a number of beautiful picture frames that are still in the family.

Manolo and Pilar were well connected to the Latino crowd, but they were considered an important part of the local community as well. As Manny Jr. explains, "My parents were truly an integral part of the community as a contributing, participating and well liked long-living family in Saranac. Manolo contributed to the community through his work, managing the office at the Troy Laundry. He was also a member of the Lions Club, the Rotary, the Fish and Game Club, and he volunteered in the community when called upon. Outgoing and personable, he naturally knew just about everyone in town and as his eldest son describes, "he proudly carried the title of "the informal mayor of Saranac." Joseph remembers the following story that illustrates his dad's important role with the local people:

"I had come home one Christmas and he asked me to take a ride with him to do some visits. He had the back of the car loaded with packages and we went to some parts of town that I had barely seen, visiting all these older folk who were pretty much on their own, delivering presents. I remember one of the old codgers telling me what a Prince our Dad was, as Manolo came and visited with him at least once a week during the year to make sure he was all right and to see that he had food in the house. I think Manolo was version of Saranac's meals on wheels. He would also spend time with them and play checkers or whatever to give them some company. Certainly the affection that the town had for him was reflected in the number of people that came to the funeral home and the funeral"

Manolo died of a sudden heart attack at age 74 on October 9, 1963. He was buried in the St. Bernard's Cemetery in Saranac Lake. Pilar lived on in the brick house for two more years before moving west to be with her son, Joseph. She died May 21, 1979 at Joseph's home in Littleton, Colorado. She is buried with her husband in St. Bernard's Cemetery.

Pilar was a well-known as an accomplished piano player, she gave lessons in her home to many Saranac Lake residents. She also volunteered her talent for various functions in the community. Pilar became close friends with Ditta Pasztory, the wife of the famous Hungarian musician and composer Béla Bartók, who came to Saranac Lake for his health in the summers of 1943, 44, and 45. Joe Benero remembers that Mrs. Bartók frequently came over to visit and play piano with his mother, taking advantage of the two pianos in the house to play duets together. Pilar held Sunday afternoon piano recitals at her home and invited local people to come and listen to Ditta play.5

Apart from her music, Pilar's energies went into the raising of the two boys, Manuel and Joseph, and she was in the words of her eldest, "a respected mother... temperate in personality, not given to anger, with a strong Catholic background, all however, belying a strong will and independence." Pilar and Manolo imparted these traits and more to their two sons.

Joe and Manuel Jr. (Manny) grew up between the two worlds of the Latino visitors and patients and the local community. They were comfortable in both places, but they most identified with the local realm of other neighborhood children and their peers from school. As Manny remembers today, "these eyes and mind had more contemporary interests of a lad my age that what went on on the other side of town where the Trudeau Sanitarium and the nursing homes existed." In the small local school they had the opportunity to participate in a variety of sports and activities, and through these activities the Benero name became well known throughout the community.

Even though the boys were virtually the only Spanish speaking kids in the public school, they felt no discrimination for their different background, rather occasionally they were admired for being able to speak another language. Manny describes feeling "enriched and more worldly as a result of my exposure to the Latins." The boys enjoyed visiting Alfredo and Alicia Gonzalez at their cure cottage, although their mother kept their visits to a minimum, as she was afraid of exposing the children to tuberculosis. Alfredo and Alicia were very kind to Manny and Joe, as they didn't have any children of their own. Joe, who identified with the low-key styles of the local youth, recalls thinking of Alfredo as "a bit of a dandy", with his fashionable mustache, hairstyle and fancy clothes.

Manny left Saranac Lake upon graduating from high school in 1943 to pursue his dream of becoming a pilot. He entered Dartmouth during WWII, joined the Army Air Corps until the program was cancelled, and was put into the infantry. He returned to Dartmouth following the war, where he was an outstanding hockey player. He played professional hockey for one year and then joined the Navy to become a pilot. Manny's career in the Navy was interrupted when he fell ill with tuberculosis. Manny went to Sunmount, the Veterans' Administration Hospital in Tupper Lake that specialized in the treatment of TB, where he was cured by the new drugs — the same drugs that finished off the nursing industry in Saranac Lake.

Through determination and persistence, Manny returned to pursue a full career in the Navy. He served in Vietnam, flying off carriers and was awarded the Silver Cross. Manny retired from the Navy as a Captain in 1983. He was living in Spain at the time, and stayed on in Madrid working for an English company and representing them in South America. Manny settled in Austin, Texas. He had two sons, Manuel Sr. and Anthony. Manny died December 11, 2009.

Manolo and Pilar's younger son Joe graduated in 1947 from Saranac Lake High School, and went on to graduate from Colgate University. He joined the US Marine Corps where he entered flight school. Joe spent several years flying on active duty and then worked as a pilot for a small airline. Later, he joined an Aviation Insurance company, where he worked for forty years. He continued flying privately through his work, and also flew in the Reserves. Joe lived in New York City, Denver and today makes his home in Dallas with his wife. Together they have four children from previous marriages.

Information on the Benero family, unless otherwise noted, provided by Manuel and Joseph Benero in oral interviews and letters, April 2002.