A brick at the Saranac Laboratory has been dedicated in the name of Manuel L. Quezón by Rich Loeber. 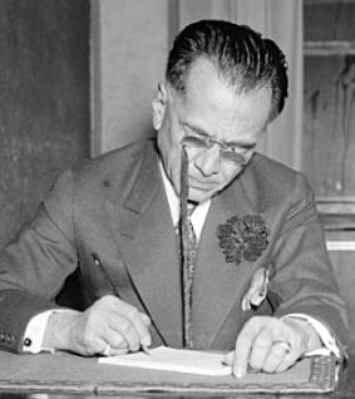 Manuel Luis Quezón y Molina was the president of the Commonwealth of the Philippines from 1935 to 1944. Quezón worked on the problem of landless peasants in the countryside, reorganization of the islands' military defense, governmental reorganization, the settlement and development in Mindanao, the foreign strangle-hold on Philippine trade and commerce, proposals for land reform and fighting graft and corruption within the government. At the outset of World War II and the threat of the Japanese invasion, Quezón established a government in exile in the US. He was treated by Dr. John N. Hayes.

During his exile, Quezón died of tuberculosis in Saranac Lake while staying at Camp Massapequa on Lower Saranac Lake.

President Manuel Quezon of the Philippines leaves with his staff tomorrow for Saranac Lake. They will travel in a special train furnished by President Roosevelt.

The head of the Philippine government in exile came to Asheville, from Miami, Fla., for his health six weeks ago. Mrs. Quezon and their three children will join him later at Saranac Lake.