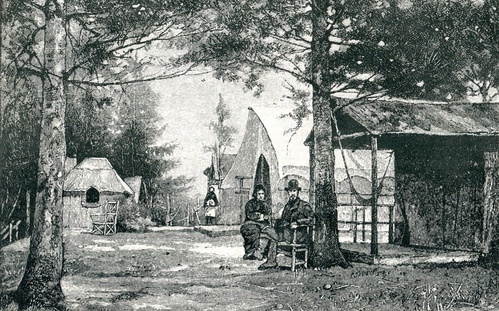 Marc Cook was a reporter for a New York city newspaper who in 1879 became ill with tuberculosis and came to the Adirondacks to cure. His account of his experience was instrumental in the growth of the cure industry in Saranac Lake.

A brick at the Saranac laboratory has been dedicated in the name of Marc Cook by Historic Saranac Lake.Adirondack Daily Enterprise, April 8, 1989

The consumptive's tale that made the big time

In Harper's Monthly Magazine for May, 1881, an article titled "Camp Lou" appeared relating the traditional story about a consumptive's search for health in the Adirondacks. For some odd reason, the article did not indicate the author's name but it drew such response from readers that an enlargement, in book form, was published later that same year. In the hard cover book, the title was changed to "The Wilderness Cure" and it became apparent that the author, Marc Cook, was also the invalid of the story. It is of interest to us locally because it is an excellent example of the many restorative accounts, such as Martha Reben's "The Healing Woods," and because it is also closely related to our area.

The story begins typically with the arrival of a very sick young man at Paul Smith's Hotel on the seventh of June, 1879. He was in such a weak condition that a group of guides on Paul's piazza wondered why he had come here to die. Walking across the hotel lobby he sank into a chair completely exhausted, displaying a wan pallor. His doctor had informed him earlier that he was a victim of pulmonary phthisis, later known simply as tuberculosis. Cook then became aware of a paper which had been read before the Medical Society of the State of New York in 1879 by Dr. Alfred L. Loomis. In his address, Dr. Loomis strongly recommended the therapeutic value of the pure air abundantly available in the Adirondack Mountains. He cited the favorable results that his friend and colleague, Dr. E.L. Trudeau, was discovering during his own stay in the mountains of northern New York.

Trudeau had arrived at Paul Smiths six years earlier in quite the same condition as Cook. Loath to leave a climate so beneficial to his health, Trudeau elected to move into Saranac Lake when Paul closed his hotel for the winter. For the past several years, he had been summering at Paul Smiths and wintering in Saranac Lake, while exchanging correspondence with Dr. Loomis. Both medical men agreed that by getting fresh clean air into the lungs, by living out of doors, and gaining weight by following a nutritional diet, chances for a restoration of health were very good indeed.

Marc Cook was a reporter for a New York City newspaper when he developed an insistent cough. At first, he paid little attention to the ailment and continued to work without any further worry, but when the coughing persisted from autumn of 1877 until spring of 1878, he decided to see a doctor. He was advised to take some cod-liver oil, eat nourishing food and get plenty of rest. On the first of April as he stepped off the Fulton Ferry he suffered his first hemorrhage.

After seeking several other opinions, a Doctor Watson advised him to get out of the city and head for the Adirondacks, that is, if he cared to go on living. Taking Dr. Watson's advice, Cook traveled to Plattsburgh by rail, where he spent the night. On the following morning, he again rode a train for 20 miles to AuSable and then 40 miles by stage coach over rough roads to Paul Smiths. This tiring trip caused him to arrive in the condition noted earlier when the guides on the hotel porch would not care to place a wager on his chances to survive. The invalid was most anxious to get started on his camp life, which offered his final hope for a miraculous recovery. He had purchased and read a copy of Adirondack Murray's little book Adventures in the Wilderness or Camp Life in the Adirondacks which had caused a stir ten years earlier. In the opening chapter, Murray cited a case where a young city man had to be carried into the woods in June but by mid November "came out bronzed as an Indian" and in good health.

Paul Smith was sympathetic toward Cook and proved helpful in making the necessary arrangements for a suitable campsite. On a breezy headland extending into the waters of Osgood Pond a couple of Paul's guides set up "Camp Lou." It can only be surmised that the camp was named for the invalid's wife, who had accompanied him to this destination but is mentioned only in the course of the narrative, such as "we moved into Camp Lou on the twenty-first of June."

It is interesting to note Cook's description of the campsite, since it affords a glimpse of the conditions which would serve as living quarters for the duration of his and his wife's stay in the wilderness. Paul Smith's store was their only source of supplies. All necessities had to be carried overland for three quarters of a mile to the shore of Osgood and then be transported by boat for another half mile to the camp. The complex consisted of a tent platform for the main living quarters, some bark cabins, a boat, an ice house, and a beautiful outlook across the lake. The six pole and bark cabins served as a kitchen, dining room, pantry, store room, and servant quarters. The tent front could be opened to admit copious draughts of the pine-scented air so beneficial to ailing lungs.

Cook was keenly aware that he was in no way a sportsman like many men staying at Paul's hotel. He felt no desire to hunt or fish, mainly because he lacked the strength to pursue these pastimes. He followed a strict diet via Paul Smith's store, where fresh eggs, milk, vegetables, beef, mutton, and poultry were available. To this menu, the guide could add trout, venison or an occasional partridge. Besides the guide, there was a woman to cook and do the laundry, and a strong boy to chop wood and haul water.

Should a medical emergency arise, it was comforting to know that both Dr. Trudeau and Dr. Loomis were in summer residence at the nearby hotel. As time slowly passed, Cook continued to show a marked improvement and, in his own words, he had found "Freedom — delicious, absolute freedom — from dust and noise, and the roar of city streets." He also enjoyed the complete solitude with no neighbors in sight, only the sentinel pines, the clear lake, and the distant blue mountains. All the camp furnishings — tables, chairs, etc. — were fashioned from native wood in the rustic manner — with the bark left on. During the evenings, Cook could sit before a roaring campfire while enjoying a cigar and an occasional dram of brandy.

As autumn approached, a decision had to be reached regarding a suitable place to spend the winter. With an ever-increasing awareness of his physical gains, which he credited to the Adirondack air, Cook was committed to spend a winter in the immediate area. He had determined that, at the very least, a full year would be required to ascertain whether or not the cure was truly working. When it came time to break camp, he found that he had the strength to help the guide with the labors. Quite a change from the seventh of June!

Since Paul Smith's Hotel did not remain open in the winter, Cook had to search elsewhere for lodging. Dr. Trudeau wintered in Saranac Lake and those patients who chose to follow him there were housed at the Berkeley Hotel. This option was put forth to Marc Cook but he held out for personal reasons. He felt that being in close contact with other invalids the conversation would deteriorate into a round of comparing symptoms, whether they be optimistic or otherwise. This he could do without. He located a farm house midway between Paul Smiths and Bloomingdale which he found to be homey and comfortable. His landlord was a healthy combination of guide and farmer but, unfortunately, Cook did not identify him by name. His bill of fare was satisfactory with only one exception. According to Cook, there is nothing tougher in this world than Adirondack beef.

In nearby Bloomingdale one could find a tavern, a general store, a post office, school, church, and a telegraph office to keep in touch with the outside world. Cook purchased a buffalo coat and enjoyed sleigh rides in the brisk winter air. He felt that the cold dry air of the Adirondacks was every bit as beneficial as that of the much touted Davos in Switzerland, if not more so. Better yet, the individual who could not possibly afford to travel to Davos should be advised that, "Here, within reach of thousands who could never hope to journey to far-away places, nature provides a sanitarium destined, in the reporter's belief, to become the future Mecca for consumptive patients."

Strangely, the author does not disclose to his readers any final word on the miracle of his return to a healthy life. Since he did not repay his visit to Camp Lou the following summer, we can only assume that he went back to his work as a reporter and wrote his "Wilderness Cure" two years later. Certainly his prediction that the area would become a Mecca for consumptives was valid indeed.

What a surprise would have been in store for Marc Cook had he returned to Saranac Lake during the early 1900s to view an entire colony of sanitaria where row upon row of patients could be found relaxing in cure chairs on open porches while breathing in that famous Adirondack air.