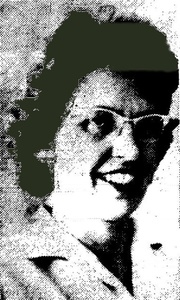 Margaret Louise Wilson Lamy, known as "Marge," served as Lake Placid correspondent of the Adirondack Daily Enterprise for almost 14 years and as editor of the Lake Placid News for six and a half years.

She was a daughter of Gordon H. Wilson and Anna Wilson Bathgate.  She was salutatorian of the Lake Placid High School Class of 1947, and earned a bachelor's degree in journalism from the University of Rochester  in 1951, becoming editor of a college newspaper in her junior year.

In the editorial columns of today's issue of the Lake Placid News we spill out our thoughts and our emotions about Marge Lamy who is leaving the Adirondack Publishing Co., Inc. at the end of this week. While this means her resignation as editor of The News, it should not he forgotten that for most of her term of service she served as  Lake Placid correspondent for The Enterprise, a function which of course, she also gives up after tomorrow.

Here are those portions of The News editorial which apply equally to Marge's work with The Enterprise: ...

It will be about 14 years ago next May that we were approached at a large Washington conference by a young woman we knew only slightly who said she had heard we were going to become publishers of the Adirondack Daily Enterprise and she would like to apply for a job. Our response was a casual, noncommittal, almost offhand suggestion that she write us a letter. She did.

After arriving in the Adirondacks the following month, we soon realized that Lake Placid was getting short shrift, to put it mildly, in the news coverage of The Enterprise. We pulled out the letter from Margaret Wilson, checked around Lake Placid and found out that the applicant had been the prize graduate of Lake Placid High School, was well known, highly admired and well liked in the community. We made a telephone call.

And that's how Marge Wilson (subsequently Lamy) came to be the first new employee of the new publishers of the Adirondack Publishing Co., Inc. Except for a few months when she was on loan (reluctantly on our part) to serve as executive secretary of the Adirondack Park Association [sic], Marge has been with us ever since.

We can say, without qualification, that Marge has been the most competent reporter, and the hardest worker, that we.have ever had on our staff, in either paper. Furthermore, her knowledge of the Adirondacks and of Lake Placid in particular together with her total dedication to the area and to the community, has been without equal.

During most of this period — over four of the six and a half Years — both publishers were representing our country in foreign lands. During this period Marge Lamy continued to serve with a degree of loyalty that can only be termed matchless.

Why is Marge leaving? It's very simple. She is tired, very tired.

Too few Placidians are sufficiently aware of the stark reality that Lake Placid is something more than a small community of some 3,000. There cannot be many towns of this size with more going on than in Lake Placid, with the constant stream of events during most of the seasons of the year To try to give adequate attention to all these happenings is almost above and beyond the call of duty, even with the competent assistance, mostly parttime, that Marge has had. The publishing of a good weekly there is a far cry from the same undertaking in a sleepy village of the same size under normal circumstances.

And so Marge is tired. We don't blame her. We are desolate that she is leaving. But she does so with our most profound thanks for her great contributions in the past and with the consolation that she will still be with us in the area, to continue to give us advice and inspiration…