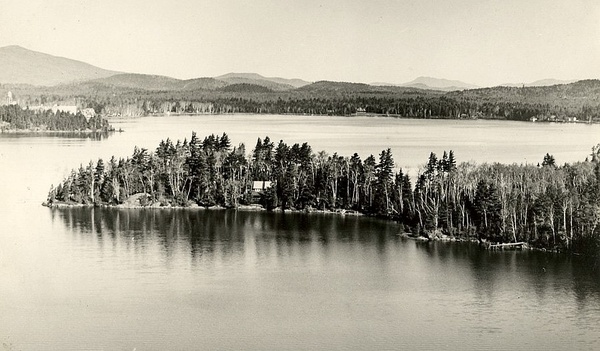 Aerial view of Markham Point from the south, c. 1960.  A note from the donor reads:
Camp "Windy Point" (as it was known in the 1950's) is located at the very tip of Markham Point, in the Northeast corner of Upper Saranac Lake... There are two other camps located on the peninsula, and which share a 3-mile driveway. During the 1950s it was owned by Earl Wagner and later his widow, Catherine Wagner."
Courtesy of the Adirondack Experience 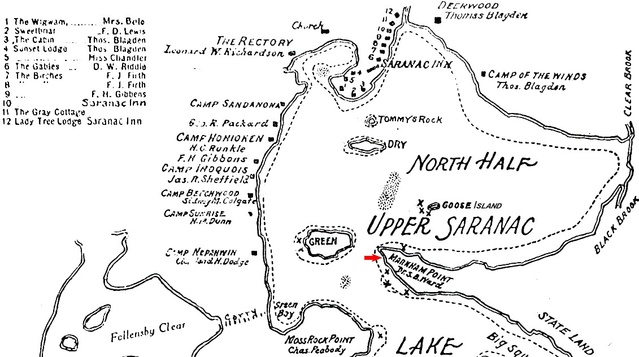 The eight acres at the western tip is presently a camp called Three Trees Camp.

State land starts six-tenths of a mile east of the western tip of the point and continues all the way to Forest Home Road, 2.5 miles via Dunlap Road.

James R. Dunlap, [sic] hat manufacturer of New York city, has bought a 50-acre tract in Upper Saranac Lake near Saranac Inn and has started erection of an Adirondack camp that will cost $50,000. William G. Distin, Saranac Lake architect, designed the camp. The property is on Markham Point and at present cannot be reached except by water.

The APA has also approved a six- lot subdivision planned by John R. Dunlap on the shore of Upper Saranac Lake in the Town of Santa Clara.

The permit for the 23-acre property on Markham Point Road, located off Forest Home Road, allows the creation of one 4.4-acre lot with an existing house, four lots from 2.9 to 3.6 acres in size for single family homes, and one 5.8-acre lot to remain undeveloped but with the potential for a future two-lot subdivision.

Construction of septic systems on the site will be monitored by a state-licensed engineer, according to an APA memorandum. The permit requires, future structures to be at least 75 feet from the lake's high water mark. Boat docks, but not boathouses, will be allowed at the site.