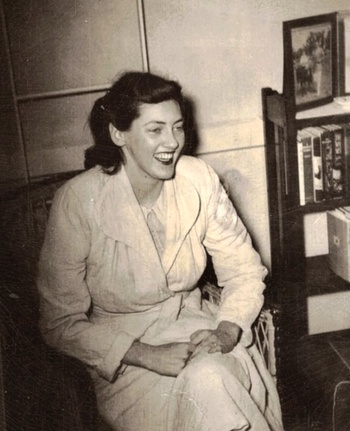 Mary Acheson Bundy, daughter of US Secretary of State Dean Acheson and wife of Assistant Secretary of State William Bundy, advisor to Presidents John F. Kennedy and Lyndon B. Johnson, cured in Saranac Lake in the mid-1940s. She and her father corresponded daily while he was serving under Harry Truman in the State Department; some of their letters are printed in his book, Present at the Creation. She cured at 29 Church Street, 169 Park Avenue and the Santanoni in the mid-1940s; her doctor was J. Woods Price. 1

She was a friend of patient Patrick MacDermot and his wife Ilah.

In addition, life for the Achesons had become far more difficult that April [1944]. His youngest daughter, Mary, had contracted tuberculosis, and the doctors felt strongly that she should recover at a sanatorium at Saranac in upper New York State.

Mary Acheson Bundy had been married in 1943 to William Putnam Bundy, the lanky older son of Harvey Bundy, who had served as Secretary of War Henry Stimson's special assistant. Her husband, then an officer in the Signal Corps of the U.S. Army, had gone off to the European theater, where he was assigned to cracking enemy codes at Bletchley Park in England. While he was away, Mary lived with her parents in the house at P Street, while working as a cryptanalyst at Arlington Hall, a secret army operation in Virginia. Like all of her colleagues, she took her turn at various eight-hour shifts around the clock and this exhausting schedule may well have contributed to her illness.

In early May, she left for Saranac, and for the rest of that spring Acheson wrote her nearly every day. It had been a habit for father and daughter to sit down in the evening at around ten o'clock and gossip about the day's events, often over milk and crackers. The letters reveal Acheson's increasing impatience with Stettinius and with his immediate superior, Under Secretary of State Joseph Grew, along with his genuine desire to quit government service.

Dean Acheson, Under-Secretary of State, was in town for a few days visiting his daughter.