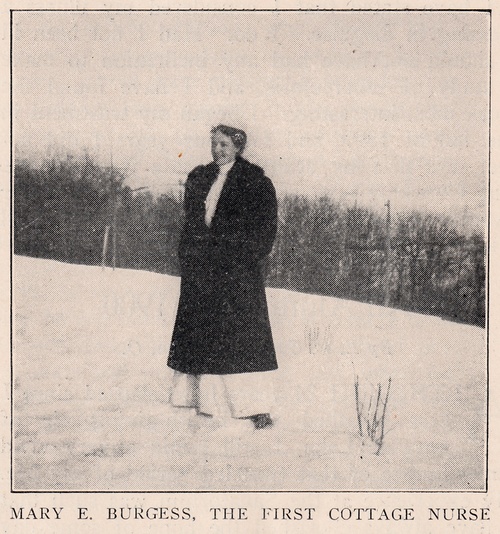 Mary E. Burgess  came to Saranac Lake for treatment in 1899. She was just a few months shy of completing her nursing training in Michigan, and came for treatment at the Adirondack Cottage Sanitarium at her doctor's insistence. She later called this a "blessing in disguise," and went on to serve as the first "cottage nurse," visiting patients who were bound to their beds in cottages at the sanatorium. She later owned the Burgess Cottage at 107 Park Avenue, and had more than 21 years of good health with no recurrence of TB. She was working as the assistant superintendent of a hospital in Ontario in 1925.

Mary E. Burgess, R. N., Assistant Superintendent, General Hospital, Sarnia, Ont.
In the summer of 1800 I was about to finish my training as a nurse, and, needless to say, I was looking forward to the day when I should receive my diploma. About two or three months before the date arrived I became ill, and on examination it was found that I had what was termed an "incipient lesion." As I had never been ill in my life except with minor ailments, the news was rather a shock, but, like many others, I felt in my own mind that the doctor did not know what he was talking about. He finally convinced me, however, that the only thing for me to do was to go to the country until he could make arrangements for me to enter the Adirondack Cottage Sanitarium (as Trudeau was then known). No pleading on my part had any effect whatever toward changing his mind--I was to go to the Sanatorium for at least three months. To meet Dr. Trudeau was to be inspired with confidence in him, and to become acquainted with and to work with him I have counted one of my blessings. He was beloved by all, patients and non-patients alike. I arrived in Saranac Lake in October, 1899, much depressed, but was made to feel at home almost immediately. On the contrary, I very shortly realized my illness was to be a blessing in disguise.

I went to Saranac fully expecting to return to Michigan to resume my nursing work after three months. But for eighteen months I did practically nothing but take the cure. Under the excellent medical direction of Dr. Trudeau and his assistants, and the untiring care of Miss Ruth Collins, at that time the only nurse in the Sanitorium, finally was able to take up my work by first assisting Miss Collins in the infirmary. Later Dr. Lawrason Brown conceived the idea that it would be an advantage to have a nurse to visit and care for patients who lived in the cottages but who were slightly indisposed, and I was asked to take up this work. I was glad to do this, and thus started the cottage nursing at Trudeau. My work in this position was of only a few months duration, owing to the fact that I received an offer of a larger position elsewhere.

Among the patients, at least during my residence, there was a wonderful spirit of good cheer which would do anybody's heart good. This combined with the careful supervision of all in authority, and as a background the bracing air of the pine-scented Adirondacks, the scenery and the sunsets--well! Patients just must get well at Trudeau.

I have stated that I considered my illness a blessing in disguise. I do. Had I not been ill I should not have had any inclination to make a study of tuberculosis, and I have found the work most interesting. I began my treatment in the fall of 1899, and for four years I did not feel sure that my health was safe from relapse. But I steadily improved, and since 1903, or for twenty-one years, have not had a relapse. I shall always sing the praises of Trudeau.