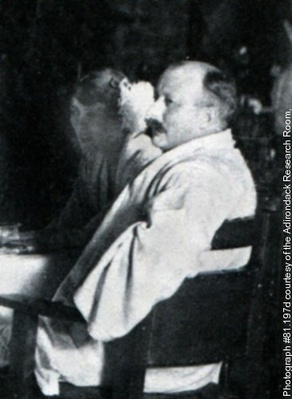 Mary and Dr. Joseph Nichols, wearing kimonos at a lavish dinner party on the patio in back of Highland Manor 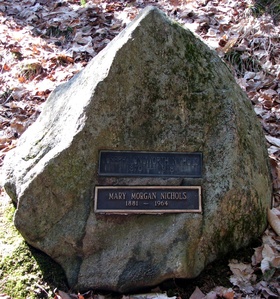 Mary Morgan Nichols, known as Mae, was the wife of Dr. Joseph Nichols; for 46 years after his death in 1918 she continued the tradition of hospitality at Highland Manor that he had started.

Dr. Joseph Longworth Nichols and Miss Mary Morgan, of Baltimore, were married at St. Luke's Episcopal church Saranac Lake last week by Archdeacon W. H. Larom, assisted by Rev. Wm. B. Lusk. Only immediate relatives and friends were present. Mrs. Bellamy Storer, of Cincinnati, Ohio, is Dr. Nichols' mother, and Mr. and Mrs. Storer were present at the ceremony. The bride and groom will spend the spring and summer in Europe and will later reside at Saranac Lake.

Mrs. Mary Morgan Nichols, who has lived in Saranac Lake Since 1905, died at 10 a.m. Saturday at Saranac Lake General Hospital where she had been a patient since April 27.

A funeral service was held at 2 o'clock this afternoon at the Church of St. Luke, the Beloved Physician, with the Rev. St. Clair Vannix officiating. Cremation will be in Troy and an interment service will be held at 2 p.m. Wednesday at Pine Ridge Cemetery.

Mary Morgan, [was] a descendant of the Kirk silver family of Baltimore...

Dr. Nichols died June 17, 1918. A story in the following day's Adirondack Daily Enterprise said, " He will long be remembered as one of the most delightful hosts that ever lived in Saranac Lake." However true this may have been, it must also be said that much of the popularity of 127 Park Avenue was due to the conviviality and charm of Dr. Nichols's wife; and for another 46 years, "Mae" Nichols ("Aunt Mae," youngsters came to call her) carried on Highland Manor's tradition of hospitality. Under the benevolent influence of this woman, the imposing villa on the hill was a warm and gracious home and a gathering place for nearly all of Saranac Lake's physicians and their families, as well as all the residents of Highland Park.

Mae Nichols is remembered as having been a kind and generous lady with her employees as well as with her guests. One employee, Edna Bryant, who came to fill the positions of cook and housemaid, decided to try out the situation for a month and stayed twenty-two years.

It was during this time that a young Dane, Charles Anderson, moved into the rooms on the second floor of the carriage house. "Charlie" was a gardener and Mrs. Nichols's invaluable assistant in the care and maintenance of the fruit of her talents, for she had graduated from the Philadelphia Arboretum with a degree in landscape architecture, and her gardens on the vast lot at 127 Park Avenue were hailed year after year as without peer in the village.

These gardens were for a time subject matter for the painter, Jonas Lie, whose work has received much acclaim. In the early 1920s he lived next door at 135 Park Avenue. A large canvas of his, though not of the gardens, hangs in the main reading room of the Saranac Lake Free Library.

On May 16, 1964, Mary Morgan Nichols died. There were no immediate survivors, and the hulk of her estate was auctioned off by the executors—her nephew, Rowland Morgan, and her friend and neighbor, attorney F. Ferris Hewitt. On September 1, Isadore D. Kriff, a furniture merchant from Malone, N.Y., bought the house and grounds for approximately $14,000.

Highland Manor has had several owners since then. It has subsequently undergone a number of alterations (fortunately only one major external one), and it has not been conscientiously maintained. The latest owner purchased it for $35,000 at a foreclosure auction in August 1984. It is still a grand house, a historic cure cottage, and a major landmark in Saranac Lake's built environment. It deserves a future that will do justice to its past.

Constance Moore, who in 2018 is writing a biography on Joseph Nichols' mother, reports that Mary Morgan Nichols is listed on the World War I monument in Saranac Lake because of her service with the YMCA or YWCA in France. They provided coffee or tea in huts where soldiers could rest after coming back from the front. Mary went overseas in August of 1918, right after Joseph died of TB in Saranac Lake.

I live in the UK and have inherited a large collection of postcards that Mary Morgan assembled on a world trip in 1908-9 and later ones from a trip to China and Japan in 1935.  She annotated many of the cards from the big trip and my father put the cards in order and transcribed the comments. The collection should be in Saranac Lake not here in the UK and may well be of interest to someone who wants to publish a book or just have them on display to show the quite astoning trip undertaken by a young woman well over 100 years ago. My father wanted the collection to go the Historic Saranac group or other local organisation. I'm not looking for any money. If anyone wants to get in touch about this, please do. [email protected]