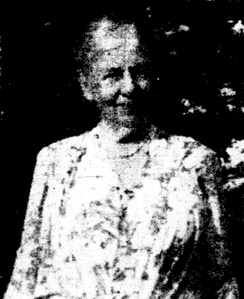 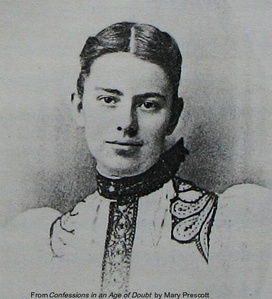 Mary R. Prescott was a young heiress from New Bedford, Massachusetts, who came to Saranac Lake to cure in 1895. At Dr. Edward L. Trudeau's urging, she made it her mission to help patients too poor to afford a cure cottage. In 1901, Prescott rented a cottage at 12 Shepard Avenue, where, along with a tent pitched in the yard, she housed four patients, a nurse and two maids. In 1905, she opened the twenty-bed Reception Hospital at the end of nearby Franklin Avenue; in 1925, it handled nearly a hundred patients, with Mary Prescott covering the annual deficit.

A brick at the Saranac Laboratory has been dedicated in the name of Mary Prescott by Dot Fobare.

In 1925, she gave the property on Lake Flower for a public park and beach that became Prescott Park.

She lived at 38 Shepard Avenue.

Dies at 89 In New Bedford

Her nephew, Bryant Prescott, had been with her only a few minutes before her death. They had been quietly discussing family affairs and Miss Prescott had talked about having luncheon with some of her family.

Then, within the next few minutes, she died quietly and peacefully.

Last February Miss Prescott had an attack of pneumonia and was considerably enfeebled after her recovery. A Saranac Lake friend heard recently from her nurse that she had been growing weaker. But she enjoyed a family Christmas dinner with her nephews and nieces and their children at the home of Oliver Prescott, Jr., her nephew in South Dartmouth, Mass.

Funeral services will be held at her home next Monday, January 9 at 12 noon. The family requests that flowers be omitted.

Mary R. Prescott was born on October 12, 1871 in the New Bedford, Massachusetts home where she lived all her life, except when she was in Saranac Lake and where she died yesterday.

Her father was Oliver Prescott who was a judge of the old Police Court in New Bedford and of the Probate Court of Bristol County, Mass. Her mother was Helen Howland.

Miss Prescott had one brother, Oliver, who died in 1938 and one sister, Helen T. Stetson, who died several years ago.

She was last in Saranac Lake several years ago, staying at the Santanoni, but she became too frail to make the trip subsequently. Since her recovery from tuberculosis at the turn of the century, she lived in a house at 38 Shepard Avenue, which she sold several years ago to Andrew McGarraghy. It was her custom to spend most of the winters here, and then return for the summer to New Bedford. More precisely, she would spend about six weeks here in the Fall, then about the first of the year come back for about six months.

Perhaps the best sources on the early years of Miss Prescott in Saranac Lake are herself and her physician Dr. Edward L. Trudeau.

On November 1, 1949, when the Reception Hospital was closed, Miss Prescott wrote an article for the Enterprise. Following are excerpts from that article:

"Last spring, I was asked for a history of Prescott House and as the time has come for closing its doors, this may be a good occasion to write one.

"I am glad to do so because my mission has been to those suffering from tuberculosis, and I welcome the opportunity, to tell them how one patient was cured.

"In 1901 I had been ill six years. I was sick of tuberculosis and sick of life. I had $1,000 in the bank. Dr. Edward L. Trudeau had said that Saranac Lake's next need was for a place for the very ill. I thought that with his help I might hire a little house for the summer and install a nurse to care for three or four patients.

"In the autumn, the Cottage was moved to larger quarters at 40 Shepard Avenue, when 13 patients were cared for, still with one nurse and two maids. Dr. Baldwin managed it in close cooperation with Dr. Trudeau, and I, deeply interested in every detail, forgot my own woes. By 1904, land had been bought, funds raised, and the Reception Hospital was being built. I had completely recovered my health.

"And so this old lady would like to point to a moral.

"Let the tuberculosis patient search diligently till he finds something that he can do, no matter how small, that he feels is worthwhile and let him do it with all his might. No sure cure has yet been found for tuberculosis; this one seems to me better than most in terms of life-long satisfaction."

The Reception Hospital was completed in 1905. Dr. Trudeau was a member of its board of directors until he died in 1915 and Dr. Baldwin was its president for 25 years and a director until his death in 1947.

Dr. Baldwin had been succeeded as president by Dr. J. Woods Price who had married a Montreal nurse, Miss Sophie Hoerner, who had become director of the hospital. Mrs. Price still lives at 116 Main Street in Saranac Lake.

Mrs. Price was succeeded as head of the hospital by Miss Madeline Smith of Rockledge Road who was in charge until 1937.

The Reception Hospital was especially designed for very sick patients since the Adirondack Cottage Sanitarium (Trudeau) tried to limit its patients to those whose disease was found early and therefore could be more easily cured. The T.B. medical specialists volunteered their services to care for these patients who were there on a semi-charitable basis. The cost was originally about $7 per week including everything except medicines, but it finally went up to $15 per week.

Miss Prescott always had the habit of visiting the bed patients personally every Sunday evening. The establishment had been built for 20 patients, ten ambulatory and ten bed-ridden.

Among the many who volunteered their services were Ernest H. Wood who was auditor for 13 years and Anthony W. Durell who later became auditor and assistant treasurer. Miss Prescott's nephew, Oliver Prescott, Jr., managed the invested funds.

In the 48 years of its existence the hospital took care of 3,512 patients. It had been built in 1906 by Scopes and Feustmann, Saranac Lake architects. Originally it had taken patients on a short-term basis, three or four months, but later with changing conditions, the stay of patients was extended, and in 1943 the hospital's name was changed to Prescott House.

In 1960, the entire institution was turned over to the Study and Craft Guild, whose headquarters had been limited to Guild House on Main Street, recently sold to the Saranac Lake Free Library associates. The actual ceremony of transfer took place on June 6, 1950 when Dr. Price, in the presence of Miss Prescott, handed the deed over to Dr. John N. Hayes, then president of the Guild.

With the closing of the hospital, its $100,000 endowment was divided equally between the Saranac Lake General Hospital and the Trudeau Sanatorium. There was also a Free Bed Fund given to the Saranac Lake Society for the Control of Tuberculosis. Miss Prescott always herself made up the deficit of the institution. She lived comfortably but very modestly. She never owned a car of her own. In New Bedford she divided the use of a car with a sister. Her friends would try to convince her to spend more money on herself, but she refused since her passion was charity.

Mary R. Prescott was a very out-going person, with a lively sense of humor and a keen mind. She had been educated at the Farmington Girls' School. She was especially fond of poetry.

In Saranac Lake she belonged to the St. Luke's Episcopal Church but she was a member of the Unitarian Church in New Bedford. With her usual humor she would jest about the change of her religious affiliation with the seasons.

A major interest of Miss Prescott was the Village Improvement Society which was founded in 1910. It was as a result of her interest in improving the community that she bought the land which, on her gift of it to the village, became Prescott Park. She was also very active in the TB Society and other local organizations which had to do either with health or the community.