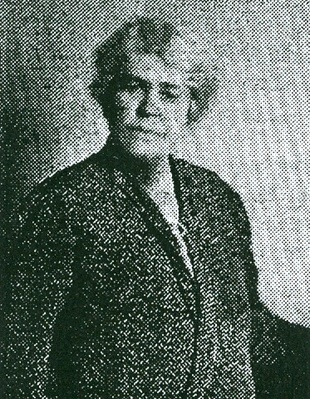 Mary Sill Palmer was one of the ten directors who incorporated the Village Improvement Society on October 10, 1910.

The services were conducted at the Palmer home, 135 Park avenue, by the Rev. Ernest B. Mounsey, pastor of St. Luke's church. The body will be placed in a vault until spring, when interment will be in the cemetery of the Church of St. John's in the Wilderness at Paul Smiths.

Mrs: Palmer's death came as a shock to her many friends in this community. Although she had been in failing health for the past year, it was not believed that her condition was critical. She was taken with a severe chill Thursday night, became steadily worse and lapsed into unconsciousness Saturday morning.

Mrs. Palmer had been almost blind for the past ten years. Her hearing was also seriously impaired, but she still maintained a sharp interest in village and current events and received many of her friends every day.

Messages of condolence from all sections of the country poured into the Palmer home throughout Saturday night and Sunday.

The deceased was born in La Crosse, Wis., July 17, 1859, the daughter of William Raymond and Grace Edgar Sill. Her father was chief engineer of the Milwaukee-St. Paul railroad. In that capacity be built the first railroad from Milwaukee to St. Paul. He later left the railroad business to participate in the development of property on the Mississippi. At the time of his death, he owned thousands of acres of river property.

Mrs. Palmer was graduated from the LaCrosse high school and later attended St Mary's Institute in St Louis, the school her mother had attended

The Palmers would have celebrated their 60th wedding anniversary this September. They were married on September 21, 1881. Two sons, Charles Sill and Dean Palmer were born to the couple. Both survive. In 1908 when Charles, the older son, became ill, the Palmers came to Lake Placid. They remained there during the summer, then came to Saranac Lake, where they have since made their home.

Mrs. Palmer was active in the affairs of the Village Improvement Society and the Ladies Guild of St. Luke's church until her age and impaired health forced her to retire from participation in local activity. Mrs. Palmer, as well as her husband was known as a generous contributor to all local charitable enterprises.

The deceased was a lover of cats and had collected six valuable Persians and Angoras which were her constant companions.

Mrs. Palmer was a. member of the Daughters of the American Revolution. She represented California as a delegate to the D.A.R. convention in San Francisco 1903. She withdrew from an active part in the organization after severe differences of opinion arose among the delegates at the parley.

Since their marriage, Mrs. Palmer traveled with her husband across the country. She remained with him when his business took him to San Francisco, Chicago, New York and other cities. Surviving, in addition to her husband and two sons, are two sisters Miss Frances Sill, who lives in LaCrosse, Mrs. Francis Wickware and Mrs. Wickware's son, Francis Sill Wickware, both of New York city. Mr. Wickware is an editor of Fortune magazine and a frequent contributor to Harper's magazine Mr. and Mrs. Charles Palmer are now in Jamaica and were unable to arrive here in time for the funeral today.