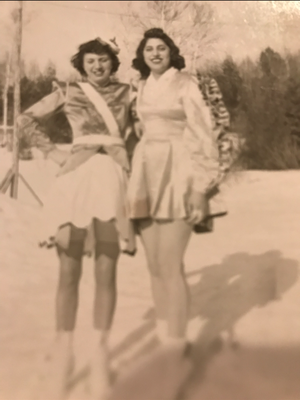 Mary Trombino (right) with an unidentified friend. Mary is wearing an ice skating costume loaned to her by actress Betty White, c. 1940s. Courtesy of

Mary Trombino came to Ray Brook for the cure between 1940-1942 from Brooklyn, New York. While being treated, she had an active life, including participating in sports. Photographs show her skating while wearing a skating costume loaned to her by the actress, Betty White (see below). She had a relationship and received a proposal from a dentist at the sanatorium. Her cure was successful and she returned home to Brooklyn. She went on to attend college, marry, have a family, and work as an Administrative Assistant at Kingsborough Community College. She also survived Non-Hodgkins Lymphoma and two hip fractures. Mary never discussed the disease that brought her to Ray Book as a young woman, as she was told not to tell anyone. She referred to it as "pleurisy." She died at age 95 in 2018. 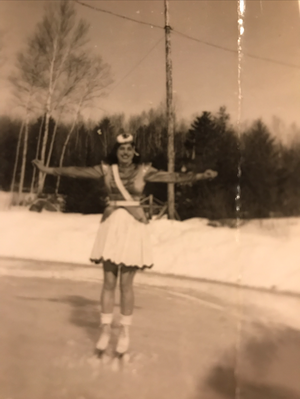 Mary Trombino, early 1940s. Wearing an ice skating costume loaned to her by actress Betty White. Courtesy of Joan Rosenbaum.The following information was shared with Historic Saranac Lake by her daughter, Joan, in 2021.

"She seemed to have had a nice time despite the fact that she was away from her family and I believe mandated to be there. There are many photos of her participating in sports and just enjoying the outdoors. She had a relationship and even a proposal from a dentist at the facility. She said she was ashamed to attend a Christmas party there because she didn’t want to wear one of the few same old dresses she had there. She said shortly before the party she received a package with a new dress from her Dad. Not a warm and fuzzy guy, a widower with 7 children, one lost as a small baby.

Yes, the Betty White, they are one year and one day apart. My Mom wrote to Betty and asked her to loan her a costume [see ice skating photograph]. Betty sent it to her. My Mom wore it ice skating there and sent it back.

Really a lovely thing for Betty to have done.

I don’t know how but I believe it was there she made some connection with Dr. Rene Dubos, the Pulitzer Prize winner. He called her, don’t know how that was possible, many years later as he was doing research at Rockefeller University. He knew she had 2 young girls and he had grad students who needed subjects. I believed I was 4 (so about 1969) and my sister was 9. My mom brought us there and they just questioned us individually. I was petrified and tried to participate but eventually ran out.

My Mom was mostly a secretary, married my Dad, Albert Klein, in 1956, they  were coworkers. She attended NYU, worked in A&S and she was eventually an Administrative Assistant to a Dean at Kingsborough Community College, she graduated from there as well. She loved that job very much and really got joy from helping students and seeing them move on and accomplish.

She survived two episodes of Non-Hodgkins Lymphoma, two hip fractures, and widowed when I was 13. She passed away at 95, spending her last two years in assisted living. We had a nice 95th birthday for her with her 6 grandchildren. She actually just missed the pandemic in the early part of the last century and of course this one.  Sadly she was very ashamed of the disease she endured which she referred to as pleurisy. I believe it was probably TB, or at least suspected to be-? She said she was told to never tell anyone. She took my sister and I to the Olympic Village in Lake Placid in 1980 and that is when she told us. She said she was one of the healthier patients and sadly did see some young patients pass away.

I often think of how incredibly strong she was and how much she and those of her generation and before endured. It is unimaginable to me." 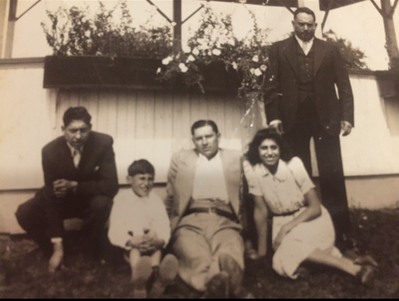 Mary (right) with her family when they visited her at Ray Brook, 1940s.