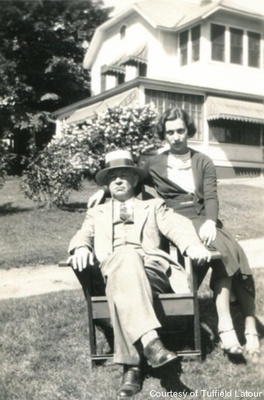 Mary Zola Latour Ryan and her father, James A. Latour

Born: September 29, 1913, the daughter of James A. Latour and Gertrude M. Rafferty

SARANAC LAKE - Mrs. Mary Ryan, formerly of Saranac Lake died Saturday, Nov. 26, in Boynton Beach, Fla., where she, had been a resident for the past several years.

She was born in Saranac Lake Sept. 29,1913, the daughter of James A. and Gertrude (Rafferty) Latour.

Burial will be in St. Paul's Cemetery in Bloomingdale.

A memorial mass will be held in May.

Funeral arrangements were with the Fortune Funeral Home