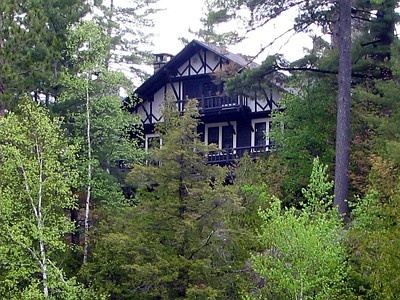 Max Harold Westhoff was a member of the initial class at Pratt Institute, and was initially employed by a major architectural firm in New York city. It seems likely that he came to Saranac Lake as a result of contracting tuberculosis at age 32. In 1902, he was hired by William L. Coulter. In 1905 he became a partner in the firm; he continued using the name "Coulter and Westhoff" for five years after Coulter's death in 1907. The firm produced a number of homes in Saranac Lake and lake camps in the Adirondacks along with two in New Hampshire; and also additions to Paul Smith's Hotel and the Lake Placid Club. Prospect Point Camp on Upper Saranac Lake was built for Adolph Lewisohn, for whom they also designed a house in Ardsley, New York. Working alone, he produced designs for the St. Regis Hotel, the Adirondack National Bank, and the Northwood School, in Lake Placid.

In 1910, he hired William G. Distin as a draftsman, who became a partner by 1918; together they designed the stone St. Bernard's Church.

In 1917, he moved his practice to Springfield, Massachusetts, where he designed a number of notable buildings. He also completed two major projects in Ticonderoga— the Hancock House (1925-26) and the Community Building (1927) — after leaving Saranac Lake. He retired in 1935, and died in Florida, in the 1950s.

As a member or members, Max Westhoff, and his wife, Anna H. Westhoff, were named in the sale of Pontiac Club property to the Saranac Lake Boys' Club, Inc., in 1917.