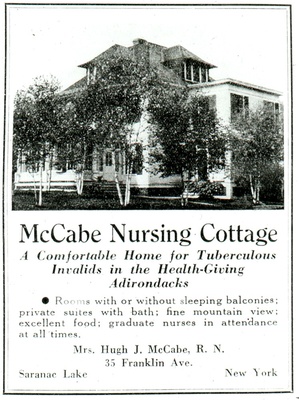 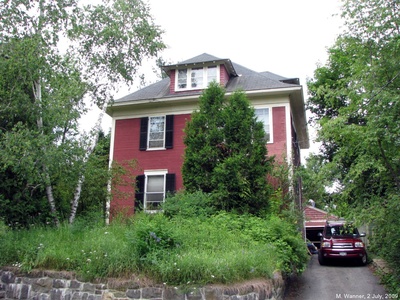 Other information: John Patrick Kenney was one of the patients who cured here.

McCabe Nursing Cottage was run by Lorette  McCabe from around 1931 to 1957. Lorette did all the cooking for the patients, and took care to make each meal appetizing. The cottage housed roughly 20 patients, and to keep up with the work load Lorette employed another nurse, a housekeeper, and her own nieces as "tray girls". 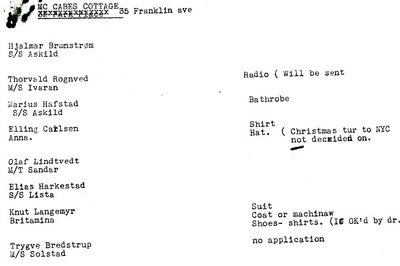 List of donations from the Social Welfare Committee for Norwegian Seamen in America in New York. For context, see Stony Wold Sanatorium. Courtesy of Natalie Leduc.

Two additional Norwegian sailors, Trygve Knudsen and Richard Lykling, who cured in the McCabe Cottage, were interviewed for the column "Cottage Calls" in The Guild News in September , 1943.

Other patients in the house who were also named in the column were Thelma Haight, Meyer Rechtman, and Robert C. Sandman.

Myrna O'Neil wrote on facebook, 7/31/14: The 21 Norwegian Sailors lived At Mrs McCabe's house at 37 Franklin Avenue right across the street from our house. They were recovering from TB . We neighborhood kids always played outside in front of our house and Macdowells so that the sailors could see us. But, from 2-4 in the afternoon, it was Rest Hour, and we had to be quiet and couldn't play, because they had to have their naps on their porches and couldn't be disturbed. Mrs McCabe was a wonderful woman - had a Pontiac coupe and her dog was a Dalmatian named Flicka. These men hardly ever came out of the Nursing Cottage, but Johnny and I would see them because we used to go over to cut the grass and shovel the snow and carry the groceries in and deliver the paper. We were pretty young when they were there. The McCabes didn't have any children, but were related to the Charlands (sp) in Tupper Lake. The gentleman who worked in the Blue Line Sports Shop was married to one of them, I think.

Jill McKenty responded on facebook: "WOW.... Myrna... My mom also worked there and the woman that you lastly spoke about is my aunt... and yes she is Jackie Charland black hair married to Tom Healy. (they had 2 children: Kevin and Patricia (Cookie). My mom is Cecile (McKenty) Charland... A redhead. Laura McCabe was my great aunt who I never knew. Both my mom and aunt Jackie worked there during high school..!!!"