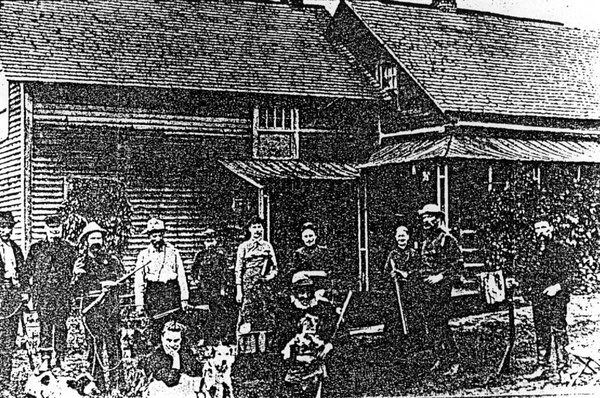 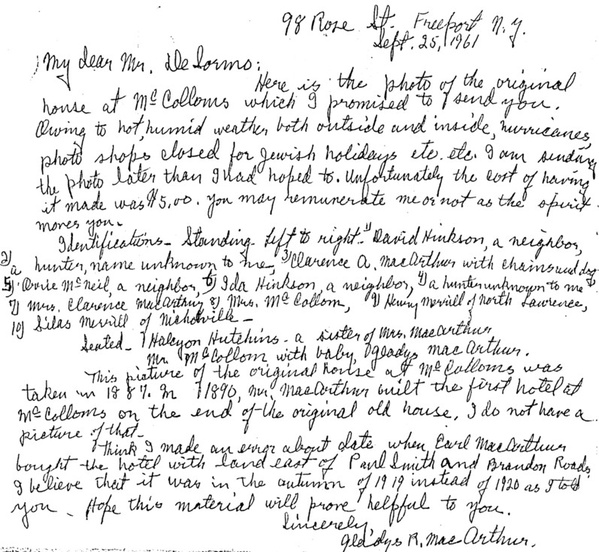 The back of the photograph above, written by Gladys MacArthur (the baby, last-named in the caption)

McColloms Hotel cabins. Courtesy of Mary Hotaling. McColloms is a hamlet six miles northwest of Paul Smiths on New York Route 30. It formed around a hotel built started by A. C. McCollom in 1849 in a log cabin built by Amos Rice after 1820. McCollum hired Clarence A. MacArthur to help run the hotel, and over time turned the operation over to him. The hotel burned to the ground on March 15, 1906. MacArthur built a larger hotel from lumber cut and milled on site, and added a golf course and several housekeeping cottages. He increased the hotel's holdings to 600 acres.

Clarence MacArthur died in 1913, and the hotel was sold at foreclosure to Colonel William C. Skinner, who hired Robert Stevens to manage the place. After several years, MacArthur's son, Earl, was able to buy the property, and, with his mother and sister, Gladys, ran the place until June 11, 1924, when the building was destroyed by an early morning fire. The under-insured hotel was not rebuilt, but the family continued to rent the cottages, which are on a ridge overlooking the Osgood River.

The Sunnyside Tourist Home was located there from 1954 until 1978; it was owned by Jerome Samburgh, and managed for ten years by Robert H. Stevens.  Some of the better-known guests of the hotel in its prime included Arthur F. Rice of the league of American Sportsmen; H.F. Stevens, of the Utica bed-linen manufacturer; and F.G. Fargo of Wells-Fargo Express.

And the Hill-Top Inn was operated by Leon Disotelle in 1947.

McCollum's Hotel, long a resort of hunters and fishermen in the big stretch of country between Paul Smiths and Meacham Lake, was sold Saturday to a syndicate of which the Adirondack National Bank of Saranac Lake is a member. The sale includes 2,200 acres on which is located the hotel, Rice pond, farm and timber lands.

The price paid was $18,026. The sale was partly to effect a settlement on the estate of the late Clarence A. McArthur, lumber man and hotel man. The other members of the syndicate which takes over the property are the Farmers National Bank of Malone, Charles J. Riley of Gabriels, the F. W. Lawrence Company of Malone, Edwin F. Hogle of Malone and Benjamin Muncil of Paul Smiths. Some personal property in the hotel is included in the sale.

On state land between McCollums and Paul Smiths the forestry commission set out in 1895 many thousands of small pines about four feet apart each way and many of them are doing finely. In some places the rows can be seen for a considerable distance and if not destroyed by fire will eventually make a fine evergreen forest. It is natural pine land and the original growth was mostly destroyed by fire many years ago, the charred remains of these splendid monarchs of the forest bear mute testimony to the destructive fire fiend. A game protector is now camping in that vicinity to make sure that some careless camping party does not set fire to the woods or molest the deer out of season. Generally camping parties there are fairly careful but in this extremely dry weather extra precautions are needed. The blueberries are plentiful and hundreds have spent a pleasant week in that vicinity. What a godsend it is that the state still owns so much of the Adirondack land on which the public are freely permitted to camp whenever they choose.

The work of furnishing supplies for the big Adirondack hotels makes business lively just now for a good many people, though it is a pity that more city guests do not get into the habit of staying later in the fall when the woods are beautiful and everything is at its best in the mountains. At Paul Smiths the elegant camps on the St. Regis Lakes are all well occupied and it takes a lot of money to maintain them. At some of the places, 15 or 20 servants and guides are employed, the stables full of horses and it is estimated that $10,000, month will just about pay the bills. Supervisor McArthur at McCollums keeps 50 cows, all the milk from which he sends to these camps. The team leaves his place at two A. M every day and when the lake is reached the supply is put aboard a launch and taken to the various camps in time for breakfast. Although Mr. McArthur is in shape to care for hunting parties he is not taking summer guests this season as the hotel was burned a year and a half ago. He expects to commence building in September, and will have splendid quarters eventually. He has a sawmill running, which will supply the lumber, the wall for the new building being already in place. Many of his former guests are not a little disappointed because they cannot be accommodated. The homelike qualities of the place appeal to those who love the forests and the pine groves near the place must be seen to be appreciated. Mr. McArthur owns 3,500 acres and fires have never marred the beauty of his property. 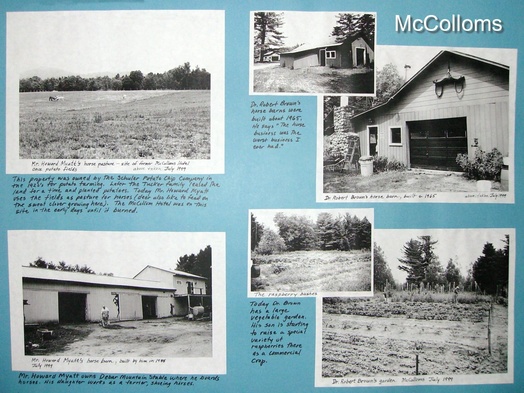 "McCollums" by Pat and Tom Willis, photo of display taken 2/2009. Click on the image to enlarge the display. ADIRONDAC GUIDE PERISHES TRYING TO HELP FRIEND

MALONE, N. Y., Feb, 5.—William Martin, an Adirondack guide, lost his life in the storm Sunday night. In company with Edward Rork, Martin started from McColloms Sunday morning to go to Madawaska, a distance of 5 to 6 miles, then return home on Monday.

After nearly reaching their destination, Rork was taken seriously ill and the two men found shelter in an old camp. Martin, started back to McColloms for help.

At this time the storm was raging furiously, and he evidently lost the trail. The men not returning Monday, searchers headed by McArthur, [sic, probably Clarence A. MacArthur] started out yesterday in search of them.

The searchers found Rork trying to make his way back home through snow three feet deep, but greatly exhausted and with feet and hand greatly frozen.

Sending him on home with others McArthur went on in search of Martin whose body was found on Lake Madawaska, completely buried in snow, except that one mitten and part of one foot were visible.

Both Martin and Rork were thorough woodsmen and under ordinary conditions would have experienced no difficulty in taking care of themselves.

Martin evidently became lost on the lake in the blinding storm and wandered about until he dropped.

[Thanks to the Tupper Lake: Early Beginnings Facebook page for alerting us to this story.]