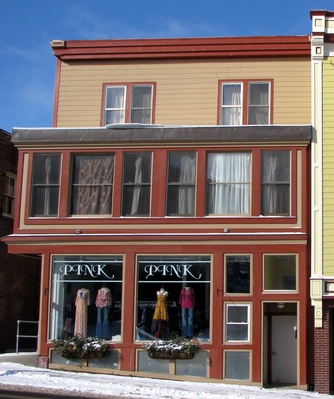 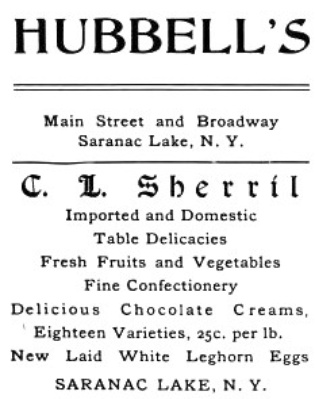 Ad for Hubbell's grocery store, Main and Broadway, 1908, from the February, 1908 Journal of the Outdoor Life. The 1908 Sanborn Map shows a grocery at 4-6 Broadway, though it is possible that Hubbell's was at some other address. Address: 5 Broadway

Richard H. McIntyre was the first president of the Adirondack National Bank (1897 - 1913). In June, 1889, he purchased a part of W. Smith Fowler's earliest acquisitions when he paid $495.58 for the lot now occupied by 4-6 Broadway facing onto Berkeley Square. At that time, Broadway was called Bridge Street and the alley that runs down the hill from Berkeley Square between the McIntyre and Jack Blocks was called Fowler's Lane.

Hollis E. MurphyMcIntyre built a three-story wooden building on the lot probably within a year and retained possession of it until November, 1908, when he sold it to H. Ray Williams. He owned it until November, 1935, when Caroline H. Hull who, with her jeweler husband, had owned 20-22 Broadway, foreclosed on a mortgage for $8,000. Hull sold the building to William A. Carson in September, 1944; and it remained in the Carson family until Nancy Miner (Pandolfo) purchased it in November, 1973. The present owners are Alice Carter, and Ronald F. and Beryl D. Laramee who acquired the building from Pandolfo in November, 1978.

There is photographic evidence that a pharmacy, Lionel F. Miller's, occupied the single storefront after WWI. Sometime around 1940, however, that space was leased to Bernard K. Wilson.

Bernie Wilson died in the late 1960's. For some years the place was called Betty's, and then Alice's.

The McIntyre Block, with its large second story front cure porch and its corner storefront entry, has been so altered over the years that its current exterior bears little resemblance to the original. The interior, however, is a different story.

In Alice's, Bernie Wilson's dual counters are still in place as are the original booths. But, older than those fixtures and probably dating from the time the building was built (c.1890) is the wainscotted ceiling that curves gently into the walls (rather than meeting them at a right-angle) and the slender, cast iron, stylized Corinthian columns that support it.

The south and rear walls of the McIntyre Block exhibit the most accomplished example of pre-1900 foundation work in the District. The mix of rock types, probably from Brewster Mountain, is typical of the material that was used before the Mt. Baker quarry, with its uniformly dark pyroxene syenite, was opened.