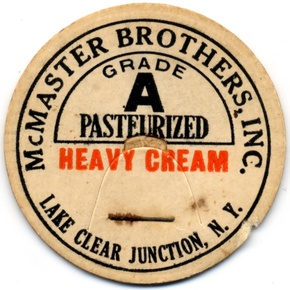 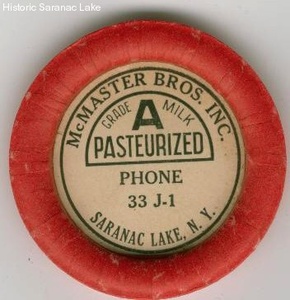 McMaster Farm milk bottle cap
Note the Saranac Lake location; it is unclear why this changed from Saranac Lake.McMaster Farm was owned by William McMaster and Ellen McMaster, who bought 600 acres from the Mutual Insurance Company of New York in 1881 and 1883. When the McMasters settled there, the road was known as the Crossroad; it was not renamed McMaster Road until about 1930. They ran a dairy from 1912 until 1972. They kept about 30 cows, and bottled, pasteurized and delivered the milk and cream to Saranac Inn, Lake Clear and Saranac Lake.  The farm was later operated by Joseph McMaster and then by Jack McMaster until he retired in 1980.

The farm was later known as the Hoyt farm.

The history of McMaster Road

A minute for some history in Lake Clear. Ever wonder where the name came from for the McMaster Road? Well in 1881 a young couple by the name of William and Ellen McMaster arrived in Lake Clear. They purchased a total of 600 acres, some in 1881 and some in 1883, from the Mutual Insurance Company of New York. At that time the road that they purchased their property on was called Cross Road. Appropriate since the road went from the main road to Forest Home Road.

William and Ellen built a log type home and a barn. That home burned and was replaced with the large home that John (Jack) McMaster now lives in. That became the family home, along with the barn and several other buildings at that site that were built by the sons of William.

William and Ellen had four sons: Joseph; Andrew; John and William. Joseph was next to take over the 600 acres. Joseph and his wife, Cora, started the dairy business. William and Cora had moved to the Forest Home Road to a farm of their own. Andrew and John stayed to help Joseph with the dairy.

Joseph and Cora had two children, John called Jack and Esther. Esther left for town in 1946 to marry Tom McDonald and they set up a home in Lake Colby to raise their family. In the early 1950s Jack took over the dairy and delivered milk to Lake Clear and to Saranac Lake. Jack had a truck with the business name on the side. It is said by some people who have lived here all their life, that Jack was known to deliver milk to families with children who were short of funds. I wonder how many of you remember that? In the early 1970s Jack stopped delivering milk. But Jack does not sit idle, he splits and ranks his own firewood. He also hays at least three of his fields. This remarkable man was born in 1913 in the house he still lives in.

Like most family farms at the time the McMasters had horses to help with the farm jobs. They raised a few pigs and occasionally sold some of the pork. They raised some chickens and also potatoes of which they sold some.

Back to Cross Road. Apparently at first the road was very winding and very narrow. Must have followed the local deer At that point the road was a sub base of stone with some dirt thrown over the top. Around 1916 it was starting to be used by cars. Around 1930 the road was renamed to McMaster Road for the family that first started living there. Around that time the road had a hard top put on it. Then in 1970 the road was rebuilt and straightened out some and resurfaced. Esther says she remembers a horse drawn wooden roller that was used to plow the road. In the spring when everything thawed, the road was one bumpy mess!

So now you know. Had it not been for an enterprising young family back in 1881 we would not have had a road named McMaster Road. A very special thanks goes to Jack McMaster and his sister, Esther McDonald, for all their help with this article.