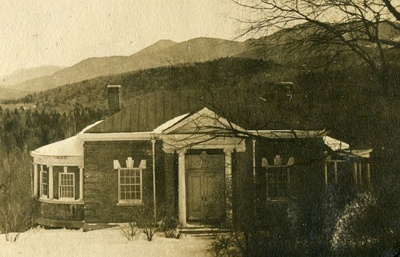 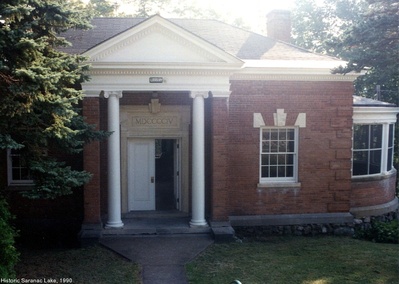 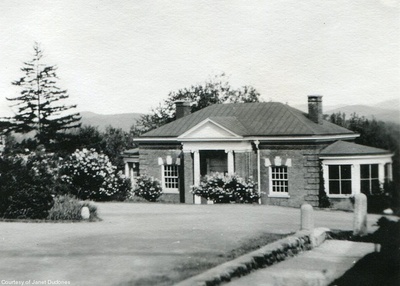 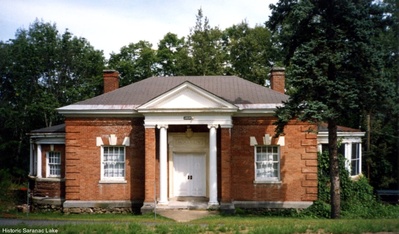 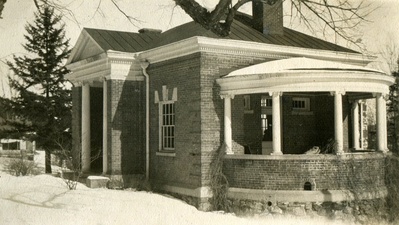 Architect: It was designed by its donor, Charles H. Mellon 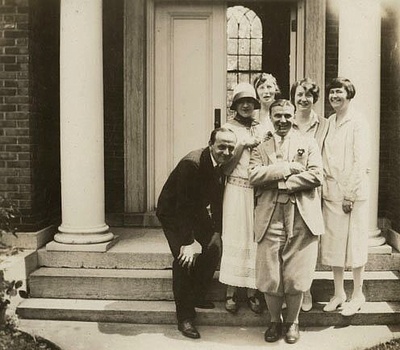 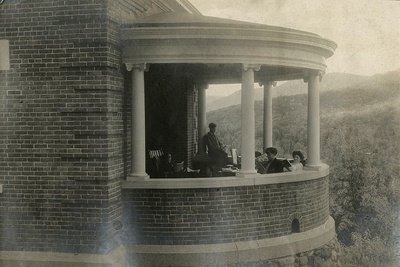 Patients enjoying the open-air porch of the library c, 1910.
From a photograph album of 96 images, courtesy of the Adirondack Experience. 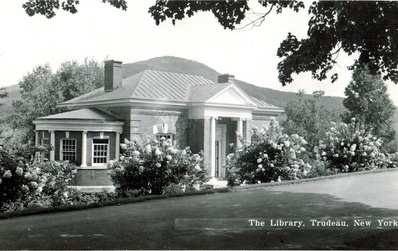 Description: Mellon Library was a Neoclassical style library designed by its donor, Charles H. Mellon. The diminutive one-story brick building rested on an uncut rubble stone foundation and was surmounted by a hipped roof. Interior brick chimneys appeared at the north and south ends of the building. The building was symmetrical, and featured a monumental central projecting entrance portico supported by Ionic columns, flanked by single bays and semi-circular wings on each end of the building. The south wing functioned as a screened-in porch. The corners of the building were detailed by quoins. Paired wooden entrance doors were set within a marble surround. Window openings were regular and contained large, double-hung eight-over-eight sash. Large-scale flat lintels featured stone keys and corner blocks. There was a Palladian window on the east side, facing Mount Baker. 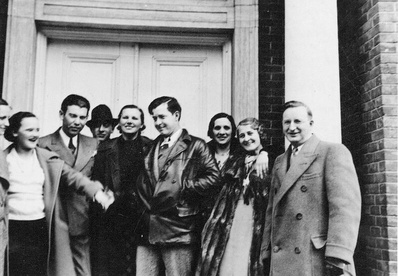 (In order from left to right) Tillie Novack, Marie Shay, Unknown, Sam Friedman, Therese Michalek, ______ Mcdermott, Columbia Finelli, Unknown, and Unknown in front of the library at the sanatorium.

History: With only 600 square feet of space, Mellon Library was compact, and rather lavishly detailed among the sanatorium buildings. Dr. Trudeau wrote in his Autobiography that "a beautiful colonial library building was presented by Mrs. Charles H. Mellon as a memorial to her husband." Charles Mellon apparently designed this library himself, but died before it was built. As in the case of Inslee Cottage and other early sanatorium buildings, the donor provided the completed building, not just the funds to build it. Elizabeth Cole included a photo of Mellon Library on page 38 of her publication.

The Mellon Library was donated to the Trudeau Sanitarium in 1903 by Mrs. Charles H. Mellon, in memory of her husband, who made the original plans. When the tubercular sanitarium was converted to the AMA Academy, the building also became another monument to the advancement of mankind.

Mellon Library was torn down in 2005 by the owner, the American Management Association.