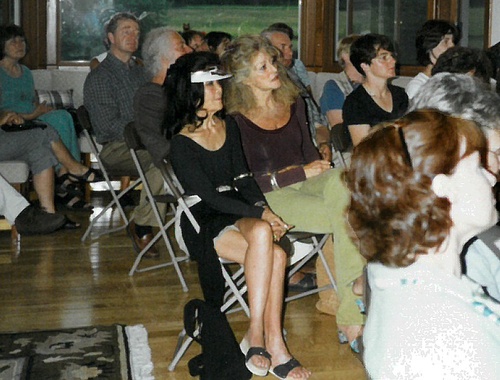 Mildred Constance "MiLi" Li Distin came to Saranac Lake in 1945 seeking a cure from tuberculosis. After her marriage to William G. Distin, Jr., she helped him manage Branch and Callanan, the family sawmill and construction business, from 1953 until 1993, and the Distin Boat Company. The couple were hosts for the 1980 Winter Olympics, entertaining visiting VIPs at Whiteface and other venues. 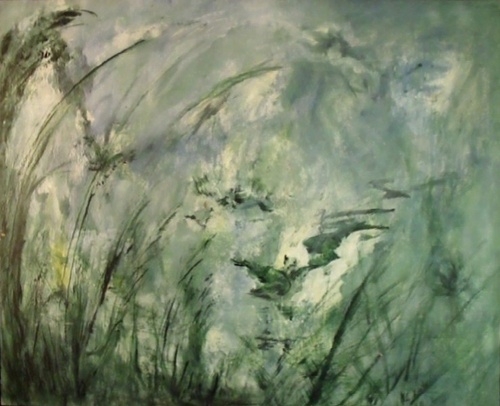 Untitled, undated abstract by MiLi DistinHer father, Dr. K. C. Li, was educated at the London School of Mines and immigrated to the U.S. from China in the early part of the 20th century. He was nicknamed the "Tungsten King;" his companies were the largest suppliers of tungsten in North America, and he developed the use of tungsten to harden steel and for munitions applications used in both World Wars. He developed a large mining and manufacturing group that included the Wah Chang International Corporation, still a leader in the mining industry. Her grandfather was a photographer and painter whose works are in the permanent collection of the Adirondack Museum. 2  MiLi was an artist, whose paintings were displayed at the Lake Placid Center for the Arts. She was a founder in 1952 of the Adirondack Antique Show, which helped to fund the women's auxiliary for the Adirondack Medical Center.

She grew up in Glen Cove, Long Island, where she attended the Friends Academy and matriculated to William Smith College and subsequently studied Mandarin at Yale University. She was the secretary of the Li Foundation, founded by K.C. Li in 1944, which finances graduate studies of Chinese nationals at a number of universities in the U.S.

The bride, who was unattended, was given in marriage by her father. A breakfast was given at the Piping Rock Club.

Mr. Distin was graduated from Dartmouth College and served as a pilot in the Army Air Forces during the war. He is a partner in the Distin Boat Company of Saranac Lake, and was selected for the United States skiing team at the Olympic games this year.

Mr. and Mrs. Distin will live in Saranac Lake.

1. Social Security Death Index
2. Mary Hotaling suggests that the photographer and painter referred to as her grandfather was probably rather her grandfather-in-law, William L. Distin.