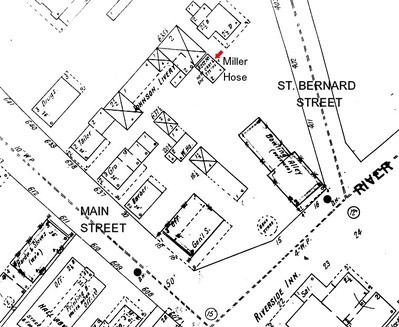 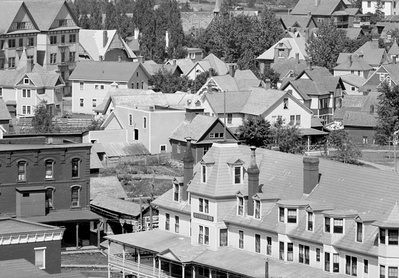 The Miller Hose Company hose house sits at the center of this 1909 photograph from Blood Hill (the full photograph is here.) The image is foreshortened, and gives the impression that the building is near the Spaulding Block at left and the Riverside Inn at bottom; in fact, it stood directly behind the livery behind the Waterhole. Hose storage buildings usually contained a tower with a cupola in which wet hoses could be hung to dry. (Library of Congress) The Miller Hose Company was Saranac Lake's second volunteer fire company, formed in 1893 when "some of the men became dissatisfied [presumably with the Woodruff Hose Company, organized in 1887] and organized a second hose company which was named the M. B. Miller Hose Company No. 2 after Milo Miller, one of the original members. They also bought a two-wheel hose cart in Malone and stored it in the municipal building (the pump house) on Main Street. The department was then moved to River Street near where 'Kerr's Tire Service is now situated,' which I believe was later the Main Line Garage..." (see Howard Riley's piece on the Saranac Lake Volunteer Fire Department page)

Before 1912 they apparently moved from their original hose building to the village's new fire house on Broadway.

The hose race which took place on July 18, 1893 between the Woodruff Hose Co., No. 1,.and the M.B. Miller Hose Co. No.2 and which was decided a draw by the judges, with the recommendation of another race; has not as yet reached its end. The challenge was sent by the Woodruff Hose, No. 1, to M. B. Miller Hose, No. 2, and now we understand that they back out in running another race in order to settle the question according to the judges wishes.

Now, the honor to us is worth more than five times the amount of the purse, and we have got it and will not depart with it until we can see that we are fairly beaten by the Woodruff Hose, No. 1.

But such statement we can not believe until we are fully satisfied that they have done it. Then we will give up the sponge and let the boys of the Woodruff Hose Co., No. 1, enjoy all honors peacefully.

Now, as the matter stands, the Woodruff Hose Co. has to give up the sponge and acknowledge that they are not in it, or then come up to terms and run another race to decide the question. And in order to give the Woodruff Hose Co. another chance to claim the honor we respectfully offer them the following challenge:

Wet race or dry race, as they may choose; distance not less than 750 feet up to 1,200; if they wish, on time or hub to hub for a purse of $200 or $300, each side to furnish half of the-amount; race to take place before August 15th; no man allowed to run but those who were active members one day previous to the date of publication of this challenge—each company to use its own cart and also new hose.

The date of the race, the conditions and regulations to be agreed and drawn by both foremen. Now, come on or give up.

P.S.—-We are still willing to race you under your own challenge, and for your honor's sake don't give up before you are beaten.

The alarm of fire which was rung in Wednesday afternoon about 2:30 proved to be in the garage of Shelly and Jordan [possibly Shelley Tool Company]. The Miller Hose Co. was on the scene in a few minutes and was pouring a stream of water upon the fire which proved to be on the interior of a large touring car, which Mr. Shelly had brought from New York. All the upholstering was badly damaged by fire besides the interior of the room. The damages amounted to about five hundred dollars.

Saranac Lake is to have an "open air" school after the Easter vacation for ten weeks as an experiment without cost to the taxpayers. It will be ungraded and all pupils now in school who are anaemic [sic] or otherwise in poor health will be admitted to the class. Miss Seymour, who is a practical nurse as well as a trained teacher, will have charge of the department which will be located on the second floor of the building occupied until recently by the Miller Hose Co…