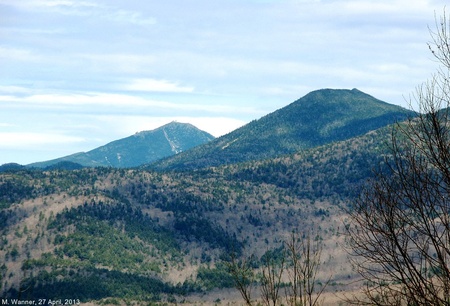 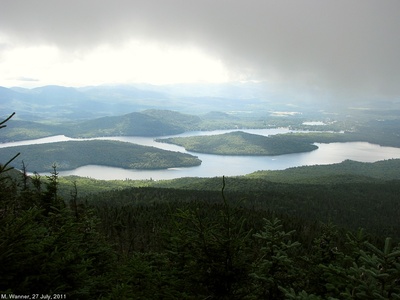 Moose Mountain is a 3898-foot mountain located two miles northeast of McKenzie Mountain, between Lake Placid and Moose Pond. It is the highest mountain in the McKenzie range, being sixty-six feet higher than McKenzie.

Story of A Miraculous Escape By Julian Reiss and Daughter

Julian Reiss, Northland Motors executive, was back at work today and his attractive eighteen-year-old daughter, Patricia, is planning to return to school tomorrow following their miraculous escape from death or serious injury Friday night when the Reiss plane was forced down on the side of Moose Mountain.

The plane, borne down by ice on its wings and propeller and with its radio directional instrument functioning improperly because of the ice and the storm Friday evening fortuitously landed in a relatively open place on the mountainside.

As it descended, the plane narrowly missed two large trees, snapping off a branch on one of them, and then sheared off the tops of two trees about sixty-foot up. The right wing apparently struck a tree first and spun the plane to the right 90 degrees and flipped it on its back while the other wing sheered off a rotten tree near the ground.

The tail of the plane was broken off. After first hitting tree tops the plane travelled about 200 feet, settling in a relatively open place.

Lt. Peter Reiss, one of those who yesterday tramped into the rugged country where the crash occurred, and a son of Mr. Reiss, said that the site of the accident was in the triangle formed by Moose Pond, Wanika Falls on the Chubb River, and Moose Mountain.

It was dark when the crash occurred and Mr. Reiss and Patricia at first did not know how high above the ground they were suspended upside down. They soon realized they were close to ground and after freeing themselves from their shoulder harnesses, plugged up the holes in the side of the cabin, dressed as warmly as they could, and sat out the night in a couple of the plane's seats.

Mr. Reiss was flying his daughter home from school at Immaculata Academy outside Philadelphia. After stopping briefly at Glens Falls at 5:30 Friday afternoon, he headed for Saranac Lake airport.

On the way the plane ran into a violent cold front that was crossing the Adirondacks, with snow and sleet flurries. Mr. Reiss was flying at 11,000 feet, well above the highest mountain peaks in the area, when ice formed on the wings and propeller.

Then one blade of the propeller threw off its coating of ice, causing the engine to shake dangerously with the unbalanced blades.

Mr. Reiss, a pilot since 1944; throttled the engine down and went into a descending glide.

The ice put the air speed indicator on the blink, and the coated antenna, made it difficult for the pilot to get radio messages as to his location.

Then he picked up the Saranac Lake radio beacon when he was at 6000 or 7000 feet and he followed it in, or thought he was following it in. When the needle swung back, it indicated that the plane was over the airport. Mr. Reiss put his flaps down to check his air speed still further and told Patty to tighten the seat belts and shoulder harness, and he spiralled the plane slowly down with the needle still indicating that he was over the airport.

But he crashed fifteen or sixteen miles from the airport.

By coincidence, Peter Reiss landed about the same time at the Saranac Lake airport on a flight from Pittsburgh. He saw the storm clouds over the mountains south of Lake Placid, but did not then realize that his father and sister were in them.

Saturday morning, while a great air search was being carried on all over the Adirondacks, the Reisses climbed two hills to try to get their bearings but did not do so until he'd climbed a third hill or spur of Moose Mountain and he then saw Whiteface gleaming white to the north.

He and Patty then set off, crossing the Moose Pond trail without realizing it and then picking it up later and following it in to the Averyville section of Lake Placid, stopping at the home of Mrs. Eleanor Westcott.

Mrs. Westcott gave them some food and telephoned the Reiss home. At home. Dr. George Hart examined them and said they were both in good condition but thought after their experience they should go to bed, which they did.

During their hike out of the woods, the Reisses could hear and see search planes. They could even hear planes taking off from the Lake Placid airport. One reason the downed plane was not spotted was because was silver-colored and landed amongst patches of snow. A Massena pilot was the first to see, it from the air yesterday.

During the search there were twenty five planes in the air, with Jim Shapiro, Saranac Lake airport manager, Tom and Bob Reiss and others working at the airport.