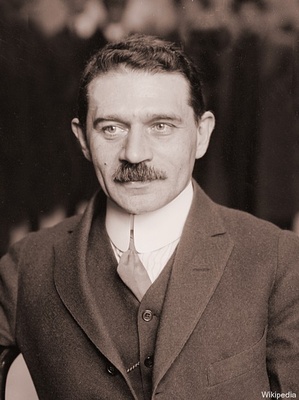 Morris Hillquit was a founder and leader of the Socialist Party of America, a labor leader in New York City, and a prominent national politician.

Hillquit ran for congress five times and for mayor of New York twice, garnering 22% of the vote in 1917 on an anti-war, socialist platform. Hillquit was part of a delegation that met with President Wilson in January of 1916 to urge that the U.S. remain neutral in the war.

Hillquit came to Saranac Lake ill with T.B. in 1919.  He was apparently familiar with Saranac Lake and tuberculosis years before, however-- in the 13th Annual Report of the Adirondack Cottage Sanitarium published in November 1897, "Mr. Morris Hillkowitz" appears. He had donated $9, not a small sum then. The reports list contributions of as little as 50 cents.

From his cure porch he witnessed the fracturing of his party, as the left wing split off to form Communist factions. By the war’s end, Hillquit’s dream of a peaceful socialist transformation of America seemed increasingly unattainable. Hillquit died of tuberculosis on October 8, 1933.