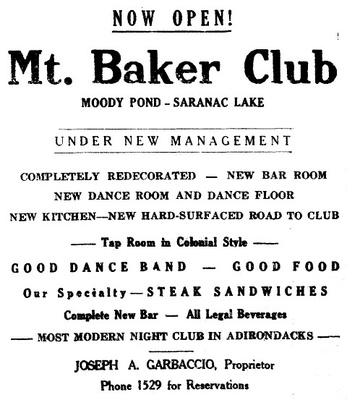 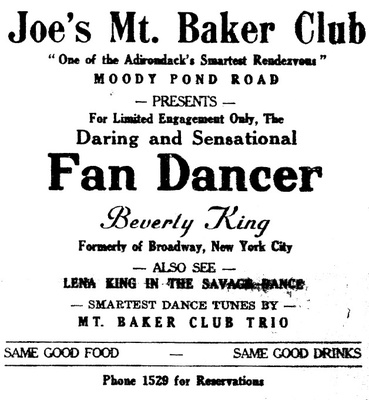 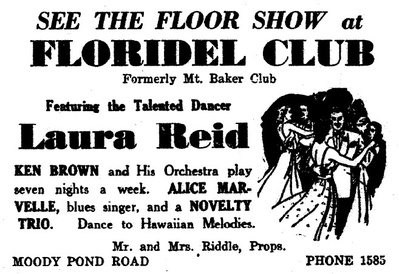 The Mt. Baker club on the Moody Pond road near Saranac Lake is presenting special entertainment features this week. The management has signed Beverly King, the sensational dancer of the stage musical comedy, "Strike Me Pink," which had a run of nine months on Broadway. Miss King was also a featured artist in the Paradise Club in New York for 20 weeks.

Her sister, Lena King, a tap dancer and singer also is featured at the club this week. Her act comes to a spectacular end in the "Savage Dance." This act is the first of a series of premier entertainment to be offered at the Mt. Baker club, according to the management. Music for dancing is provided by the Mt. Baker trio. Roads to the resort are in excellent condition.

OPENING--For Summer Season With a New Band and Entertainment

Dance to the Music of the Biggest Little Band in Dixie

You don't have to dance to our music.  Just get on and Ride.

Mt. Baker Club operated there [on Moody Pond] with delightful abandon featuring girlie shows from Montreal and a healthy sprinkling of semi-mobsters hiding out from prohibition day vengeance.

Mt. Baker Club was announcing its opening in 1933 under the supervision of Al Weidner. It was located on the Moody Pond Road, had choice foods and legal beverages and a "red hot orchestra", whose name the ad failed to mention.