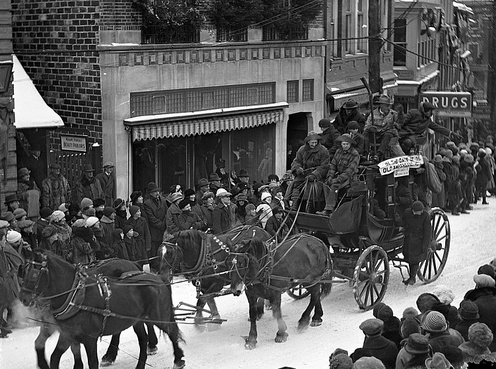 Stage coaches were obsolete by the time of this 1918 Winter Carnival parade.  The sign on the stagecoach reads "In the days of the old Ampersand Hotel" (see photograph below).  The Mulflur Building on Broadway is behind the stagecoach.
Photograph courtesy of the Lake Placid-North Elba Historical Society 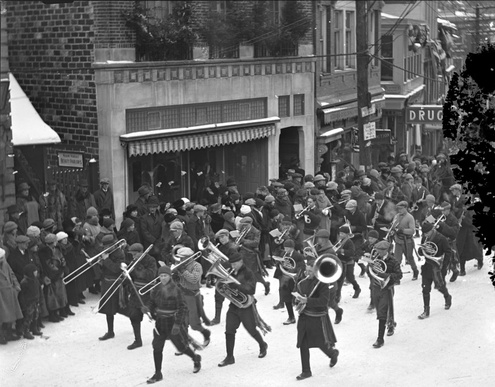 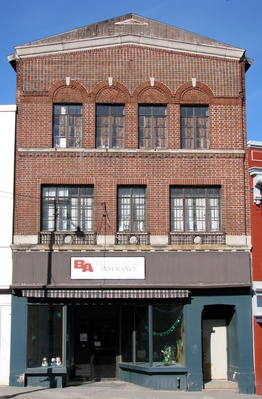 The story of the lot at 84 Main Street is a curious one. 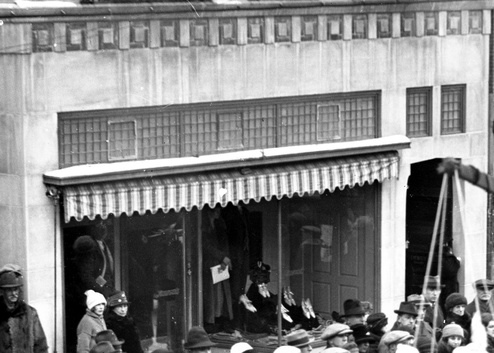 Detail of the facade. 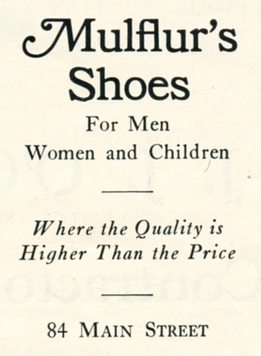 1927 Canaras Unquestionably, there was a building at the site prior to May 4, 1896. On that date William F. Roberts entered into an agreement to lease the lot from Anna O. Miller for $100 per year. Documents show that Roberts was paying land rent for the lot upon which a building already belonging to him stood and that the building had been "formerly used as a post-office". The papers (the 1896 lease, a December, 1897 renewal for $125 per year, and an 1899 deed) also note that Roberts had the right to do a number of things with his building including the right to remove it (as distinct from demolishing it, which was also a listed right). The moving of buildings in those days, and even up into the 1930s was a much more common occurrence than it is now.

Intriguingly, in June, 1887, Roberts attended a foreclosure auction held at the Loon Lake House. His winning bid of $2000 bought him the property of J. Herbert and Margaret Miller, a narrow lot 20 feet north of the Van Buren Miller House which included "the new building now (1885) occupied as a post office." The date in parentheses refers to a survey from which the quoted passage was taken for use in the deed to Roberts.

By the turn of the century, the lot in question was the site of the Empire Hotel. It seems plausible that Roberts moved his newly acquired building to the little lot at 84 Main Street, facing directly into Berkeley Square, the hub of the village, and across the street from the community's largest hotel, the Berkeley House.

When the executors of Anna O. Miller's estate sold her properties, Roberts purchased the northern half of her old Homestead Lot, but, oddly, chose not to buy the lot upon which a building owned by him already stood. Instead, the 20 x 39 foot piece was sold to Mary E. Hubbell in October, 1899, for $2500. Probably before the end of 1900, Hubbell acquired the 1 1/2 story frame, saddle-roofed structure that was on her land because, by that time, Roberts' new building at 80 Main St. was finished and ready to house his offices.

Reportedly, "Mrs. Hubbell" operated a shoe store at 84 Main Street, but the occupant of most note in the old, wooden building was "F. H. Russ Furs".

Frank Russ is remembered as a blunt and "cantankerous" man. He was one of the village's two long-time furriers, the other being Sam Edelberg. Both were in business for over half a century, throughout which the latter never considered the former competition and the former probably didn't care.

Russ was at 84 Main Street until 1922 when he moved to the Donaldson Block where he remained until the early 1960s. The move was necessary because Mulflur’s Shoes had been displaced by the Cheeseman-Kollecker purchase of the Exchange where Mulflur was the storefront occupant.

William F. Mulflur had come to Saranac Lake, in 1899, a dying man. As Elizabeth (Kennedy) LaTour remembers, "They said he wouldn't last two months, but he lived for years and had four children and a shoestore."

He married Mary Morgan in 1901 and went into the shoe business in 1910, being probably the first ground floor occupant at the Exchange. Following William Mulflur's death in 1921 and the sale of the Exchange, Mary Mulflur purchased 84 Main St. to be the new site for the Mulflur store which she and her son, William, Jr., would operate [but see Comments, below]. Within two years she had the old Post Office building replaced with the present, three-story, brick and red block structure. It was designed by Paul Jacquet who had married Marie Callanan of the Branch and Callanan contracting firm; but the builder and bricklayer was Frank Tagliabue, an independent whose headquarters was on lower Woodruff Street.

Although Trudeau Sanatorium did not close until 1954, the "wonder drugs" that finally vanquished tuberculosis began to make their appearance in the 1940s; and, by the middle of that decade, private sanatoria in Saranac Lake, of which there had once been hundreds, were shutting down en masse. This, on the heels of the delayed effects of the Great Depression, began a catastrophic decline in mercantile trade from which the village business district still has not fully recovered.

Dr. Edward Mulflur states that by the 1940's, his mother had tired of the business and neither his brother nor a sister wanted it, so it was sold to Elmer Finnegan (no relation to T. F. Finnigan). E. L. Finnegan's Shoes remained in business for thirty years.

Nevertheless, in August, 1946, the Mulflur Building was sold by referee Clifford McCormick at a foreclosure auction to high bidder Catherine C. Horton for $10,000. She then sold it, in June, 1952, to Aaron and Theresa K. Weiss of Wilkes-Barre, Pennsylvania. The Weisses assumed a mortgage balance of $8,867. Ownership of the building remained in the Weiss family until February, 1978, when Norman E. Weiss sold it to John W. Norton of Granville, N.Y.

Wilson Clothing Company, whose home office is also in Granville, purchased the property from Norton in October, 1981.

The present facade of the Mulflur Building is a quite interesting piece of brickwork. Above the concrete slabs and aluminum covering of the ground floor store-front is a small concrete cornice and a course of concrete slabs flanking the window sills of the second story. Between this and the tops of the store-front display windows is a series of alternating vertical bands of brick and concrete facing, now unfortunately covered with a corrugated aluminum panel — part of a "modern" storefront treatment.

The second story window sills are guarded by iron grills of simple but pleasing design. The windows themselves are transomed, steel frame casement type, the two outer sets twice the width of the inner set. On the third story there are four sets of windows the width of the second set on the story below.

The second story of the facade is all Flemish bond except for the top two courses which are headers all the way across. Above this is a narrow sill of concrete facing and then more Flemish bond to the top of the third story windows where, at each side of the facade there is a soldier course and then a pronounced header course. From these and three slender pillars spring a series of four blind arches over the four windows. The arches have large, pronounced concrete keystones. The faces of the arches are filled with brickwork done after the pattern of a parquet floor.

Above the arches there is a pediment of Flemish bond rising 22 courses above impost level at center and 17 courses at the edges. In the middle, there is a recessed set of headers, one wide and four courses vertically. The top of the pediment is rimmed by two courses of headers and capped by a simple but graceful, concrete cornice. The rest of the building's exterior walls are concrete block colored dark red to match the bricks of the facade. There is a poured concrete foundation. The basement extends under the sidewalk in which there used to be a trap door to allow coal ash to be lifted out by the bucketful because there was and is no other exterior access to the building but via the front.

2010-02-19 16:00:46   My father was William E Mulflur Sr., his father was William Francis. I am William Jr. and never worked in the store but did wear shoes from the store. My father used the second floor for a law office in the mid-30's and my uncle, Edward Mulflur, had his dental office there for a short time. —BillMulflur