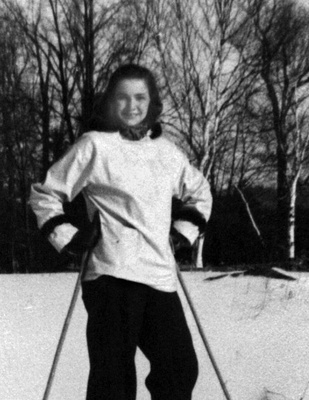 Nancy Willard Connely lived next door to Ann Packard, daughter of Dr. Edward N. Packard, when the two girls were growing up in Saranac Lake. As teenagers the two visited Dick Ray at the Trudeau Sanatorium and at the Ray Brook State Hospital; they are pictured on pages 30 and 34 in Ray's book, Saranac, 1937-1940. Nancy was Jeremy Blanchet's girlfriend. She graduated from Saranac Lake High School in 1940, from Smith College in 1944, and from Rhode Island Junior College in 1971, with an associate's degree in nursing (R.N.).

Miss Nancy Connely, of 146 Park avenue, was hostess at a sleigh ride party.

Sept. 3 was the the wedding day of Mrs. Nancy Willard Connely, daughter of Mrs. L. F. Connely, of 146 Park ave., and Ensign Albert VanNostrand, son of Mr. and Mrs. Leroy VanNostrand, of Babylon, L. I. The ceremony was performed in the Church of St. Luke the Beloved Physician.

Mr. and Mrs. Albert D. VanNostrand, of Great Barrington, R. I., are the parents of a daughter, Amy, born on April 11. Mrs. VanNostrand is the former Nancy Connely, of Saranac Lake.

Greetings to . . . Mr. and Mrs. Albert D. Van Nostrand and their four children who are in town for about a week. She is the former Nancy Connely of Our Town. He is a Professor of English Literature at Brown University. This spring he started a series of lectures on Sunday mornings over WPDC (tv) in New York. They make their home in West Barrington, R.I.

Born in Cambridge, Mass. on Dec. 9, 1922, she was the daughter of the late Willard Connely of Atlantic City, N.J. and Louisa (Fletcher) of Indianapolis.

She graduated from Saranac Lake High School in 1940, from Smith College in 1944, with a B.A. in English, and from Rhode Island Junior College in 1971, with an associate's degree in nursing (R.N.).

She lived in Barrington from 1951 to 1985. From 1967 to 1985, she worked as a staff nurse (ob-gyn) at Women & Infants' Hospital in Providence. She retired to Tarpon Springs, Fla. and continued to work from 1991 to 1995 as the R.N. at the Tampa Bay Downs race track and volunteered at the Tarpon Springs Library.

She was also a Hospice volunteer in Rhode Island and Florida for more than 20 years.

She loved to read, write, travel and beachcomb, and she was an avid sports fan. She was a lay reader, chalicist and newsletter editor for All Saints' Episcopal Church in Tarpon Springs.