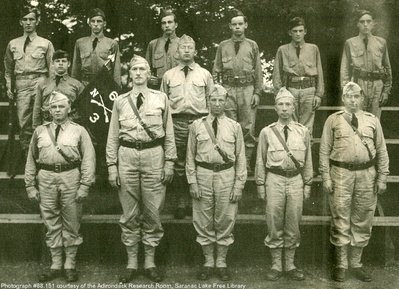 Fifty-five members of the Headquarters company, Third Battalion, 105th Infantry of the New York National Guard will be among thousands of national guardsmen from the Eastern Seaboard who— will train this summer at Pine camp.

The Saranac Lake contingent will entrain on July 31st and will undergo extensive training at Pine camp for a two-week period, returning to this village on August 14th.

The men will travel with full equipment including packs, helmets and guns. From here they will go to Malone to join other units and then on to the camp.

Both basic and advanced armory training wil be given the guardsmen. Included in their schedule is rifle, carbine and M-l firing, night drills, guard duty, tactical marches and bivouacs, motor movements, mortar, rifle and heavy gun firing and demonstrations.

This will be the first time since 1935 that the local guard has gone to Pine camp. Previously they went to Camp Smith at Peekskill but due to the large number of guardsmen from New York, New Jersey and New England states being trained this year, Pine camp was selected to accomodate the trainees.

Sgt. K. E. Trim of the Headquarters company is serving with the Post Service Detachment at Camp Smith.

Three members of the Saranac Lake National Guard unit have been selected for Officer's Candidate School upon recommendation of the company commander, Lt. John T. Merritt.

The three men appeared before a screening board at Troy, presided over by Lt. Col. John Baker, commander of the 105th Infantry Regiment and commandant of the New York National Guard Officer'sCandidate School.

On Sept. 1, they will attend a week-long leadership school at Camp Smith, Peekskill. Following this is a 13-weekend schooling at theTroy State Armory. Also, during the next 12 months they must complete the Infantry 10-10 series and a correspondence course on soldiering furnished by the Extension Course Department of Fort Benning, Ga.

Schooling will be completed with two weeks of extensive training at Camp Drum next summer. Upon graduation they will be eligible for commissions as second lieutenants in the NTNG.

The enlistees include Ronald J. Harrigan, of 1 Dorchester road, an ex-serviceman who served with the Air Force from 1345 to 1947 and then in the enlisted reserve from 1947 to 1950;

Ronald E. Martell, of 58 Riverside drive, a second timer with the National Guard, having served a four-year hitch from 1947 to 1951, and

Robert B. Ferrari, of 43 Neil street, who graduated from the Saranac Lake High School this past June and is presently employed at the beach by the Village.

First Lt. John T. Merritt, commanding officer of the local unit, reminds all area youths that if they enlist in the Guard before they reach their 18 1/2 birthday, they will receive deferment with the local Selective Service boards as long as they serve satisfactorily in the National Guard. Enlistment ages in the Guard are from 17 to 35 years.