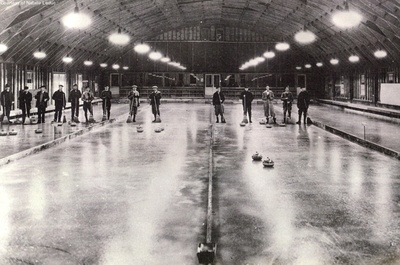 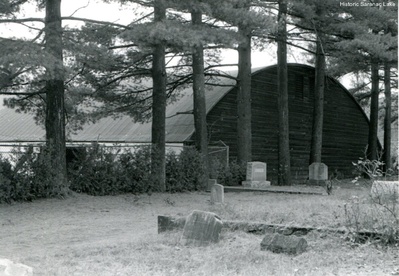 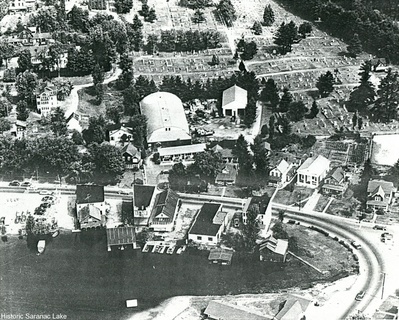 Other names: Madden's Transfer and Storage

Other information: This rink, backed up to Pine Ridge Cemetery, and with its unique Lamella roof stucture, replaced the original curling rink of the Saranac Lake Curling Club, which was located across River Street on the Lake Flower waterfront. At the time of the 1932 Olympic Winter Games in Lake Placid, curling for the Gordon Medal took place here. The Curling Club closed in 1943, due to war-time economic conditions. The 1931 curling rink was acquired in 1944 by Madden's Transfer and Storage for use as a storage facility; it is still used for that purpose.

The Saranac Lake Curling Club was started by Dr. J.L. Nichols and others, probably before 1910. Dr. Nichols is mainly credited with the introduction of the sport to the village though he was physically unable to participate.

In 1918, W.H. Cluett offered to the club "to build a permanent curling rink provided that ten men individually sign an agreement to become members and to pay five dollars each for a period of five years."

A 134 x 36 foot concrete block building was built on the shore of Lake Flower. The architect was William G. Distin, who donated his services. He, too, was an avid curler.

In the late 1920s, it was decided that a larger facility was needed and the present building, 150 x 70 feet with four rinks, was erected by 1930. Again, Distin was the architect. Major financial contributors were F. Ferris Hewitt, George H. LaPan, and others.

The new building was and is unique for its mode of construction. It features a Lamella roof. The Lamella roof was made of relatively short, interlocking wood members to form an arched vault. It was structurally a precursor to R. Buckminster Fuller's geodesic dome. The roof — which comprised most of the building — was ordered from a manufacturer according to specified length and span and was then assembled at the site.

Lamella roof buildings were quite popular in the 1940s.

This is the only building of its kind in Saranac Lake and, possibly, in northern New York State.