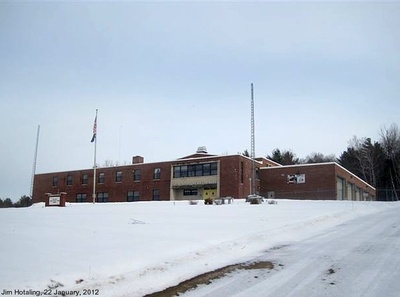 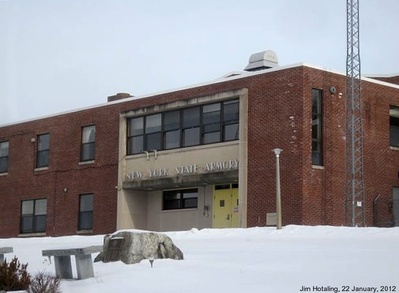 First clipping: Armory property to be given to the state

The Harrietstown town board last night authorized Supervisor James LaPan to convey to the State of New York the deed for the property on the State Road at Algonquin Avenue for the building of the National Guard Armory.

The property has been purchased and the deed is in order. There are approximately 19 acres involved. Architects Distin and Wareham and William Scopes are now working on plans for the new structure.

"That's a pretty rocky foundation." With these words and with no pun intended, Gov. Nelson A. "Rocky" Rockefeller of New York gave an extra kick to the gold shovel and finally turned up some Adirondack dirt so that the ground-breaking ceremony for the new $500,000 National Guard Armory off the State Road near Algonquin Avenue could be official.

A few minutes before, the Governor had given a special sense of pride to the local crowd with the announcement that the Service Battery of the First Howitzer Battalion of the 186th Artillery had been-selected "as the best unit in the State in its performance of duty."

The citation singled out the unit from 276 battery and company- sized unit of the New York State National Guard.

The Governor said, "I am proud of this unit carrying on in the noble tradition that won it battle honors in France during World War I and in the Pacific in World War II. I extend my heartiest congratulations to the officers and men of the battery under the command of First Lt. Albert H. Homburger and to your battalion commander, Lt. Col. Sterling Nesbitt."

Gov. Rockefeller's plane, his own Convair, arrived at the Saranac Lake Airport just before 2:30 and was greeted by local leaders, including Assemblyman Hayward Plumadore, State Sen. Robert McEwen and Assemblyman Verner Ingram of Potsdam.

A considerable body of newsmen was also on hand, including top correspondents of the New York Tribune, the Gannett newspapers, Times, the N.Y. Herald-Tribune, the Associated Press and the United Press-International. Most of the newsmen had come to question the Governor about the presidential situation and also to get his views on the collapse of the Summit Conference in Paris. They had not had an occasion to talk to Rockefeller for some ten days because of the death of his father, John D. Rockefeller, Jr.

However, the Governor steadfastly refused to hold a press conference or to answer questions having to do with politics or international affairs. The reporters persisted but unsuccessfully.

A substantial caravan of cars, led by State Troopers, brought the Governor, riding in an open car with Gen. A.C. O'Hara, Plumadore and McEwen, to Saranac Lake and then out to the site of the new armory.

As the party approached the stand erected for the occasion, three howitzers let loose a 19-gun salute. Col. Nesbitt called the meeting to order and turned it over to Mr. Plumadore as master of ceremonies.

The Saranac Lake High School Band was off on one side and in front of the bandstand were seats for some 50 to 75 persons, all filled. Units of the local National Guard stood at formal rest on both sides of the bandstand.

The ceremonies began with a beautiful invocation by Msgr. Noel Zimmerman. Plumadore, in brief prefatory remarks, cited the history of the local armory and indicated how the old armory on River Street had become inadequate. In offering praise for those who had helped in securing the new construction Plumadore mentioned the Planning Board, including the late George LaPan, Al Shortt, William Distin, Sr., the architect, and local union leaders. He then paid special tribute to Col. John R. Bedell who, shortly after his retirement here, brought "new inspiration" to the movement.

Plumadore described the decision to purchase the land in the shortest Harrietstown Board meeting on record, estimated at six seconds in length. He also mentioned the work of former Supervisor James LaPan.

Of particular local interest, Plumadore said, was the final decision to construct the armory to the larger size of 7,000 square feet, thus making possible the building's use for basketball games as well as conventions and other community activities.

Sen. McEwen was presented to introduce the Governor. He did so eloquently and briefly, insisting that his task was "superfluous."

Before making his formal speech, Gov. Rockefeller had a light, touch and disclosed that Mr. Plumadore, generally known as "Red" had once been called "Pinky." He added that the nickname had no political implications.

He then praised the people of Saranac Lake for their support of the armory project and singled out Plumadore, McEwen, former Assemblyman Robert Main, Col Bedell and the publishers of The Enterprise.

Of major state interest in the Governor's remarks was his announcement that the New York State National Guard will take over full operation on June 5 of four of the Nike-Ajax air defense installations protecting the New York City area. Later this year, the Governor announced, the Guard will take responsibility for six other Nike-Ajax installations, four in the Buffalo-Niagara area and two more in or near New York City.

Rockefeller pointed out that the New York Guardsmen have been having special training for this work during the past two years and that their new assignments would relieve Regular Army personnel for other duties.

Referring to the new armory-to- be as a symbol of "the strength that has made and kept America land of free people, the Governor said, "That strength lies in the spirit of the Minutemen who sparked the American Revolution —citizen soldiers banded together in freedom's cause. It is a spirit of cooperation and dedication to liberty that lives undiminished in the citizen-soldiers of today — the Minutemen of the present.

"The new Armory . . . . will be a product of local, state and federal cooperation, the kind of cooperation possible only in a free society. It will serve not only as a community center but as a headquarters for one of the most distinguished groups of citizens in New York State."

Following the ceremony, the actual ground-breaking was carried out by the Governor, McEwen, Gen. O'Hara, Col. Nesbitt and Plumadore.

The Governor asked the ladies sitting in the front rows whether they had softened up the ground. Finding some difficulty with the terrain, he asked, "How deep do you want us to dig?"

Rockefeller then began to make the rounds of the spectators, the members of the Guard and the high school band shaking hands, signing autographs and exchanging pleasantries in the old-fashioned political tradition.

Among those with whom he spoke at some length was the architect William Scopes who recalled to the Governor that his grandfather, John D. Rockefeller, had used an old-fashioned bobsled to slide down the Trudeau hill to the Bloomingdale Road.

Scopes, who came to Saranac Lake in 1896, recalled that cousins of Mr. Rockefeller, Mr. and Mrs. William Rudd, had come here to cure in the Evans Cottage where Dr. Edward L. Trudeau had cured.

The Governor then went over to try his hand at a howitzer, warning the spectators to put their fingers in their ears.

Finally, he congratulated band leader Joseph Boland on the band's playing and conversed with the band members for a few minutes. Then he was off to Lake Placid to carry through a tight schedule.

The Vets club held a reception following the ceremony. The National Guard officers were present, along with a good many others, but the Governor had not time to stop. More than ample food and drinks were available.

There was great hope for use of the "new" armory built on State Route 3 just outside the corporate limits of the village of Saranac Lake in the late 1950's. It seems like it happened only yesterday, and now the state and the National Guard are talking about closing the place and mothballing it. There are less than two dozen Guardsmen using the place...

For more, see this link

Armory in Saranac Lake to Close

Village plan to use it for fire, police departments could be complicated

The New York Army National Guard is pulling its troops out of the state armory on Route 3.

The facility is being vacated and will close at the end of the month.

See the Enterprise for the rest of the story. (pay site)