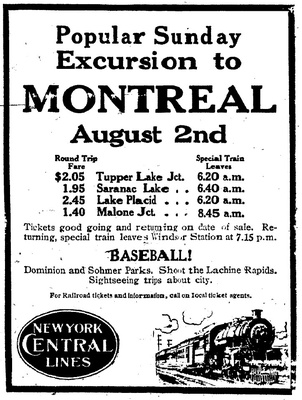 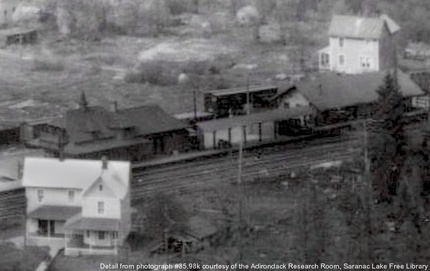 The passenger station, behind the house at lower left (204 Broadway), was used from 1892 until Union Depot opened in 1904, after which it was converted to freight use. The original freight station is at right. The house above it is at 18 St. Lawrence Avenue. 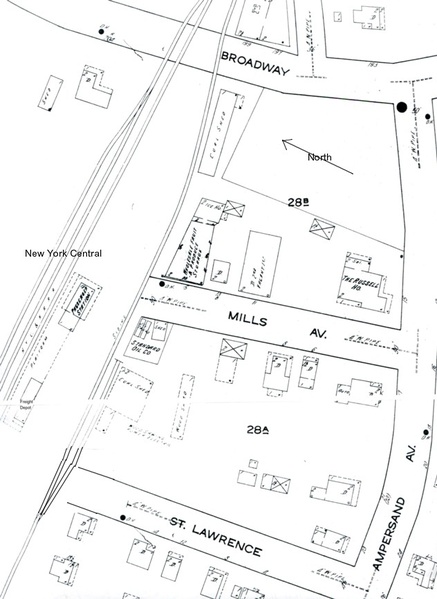 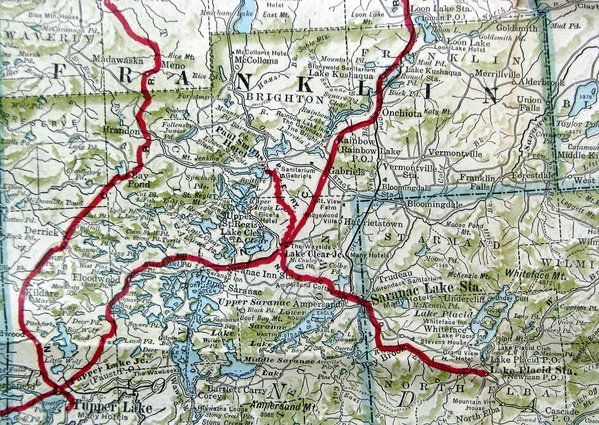 Webb's railroad connected Utica, and points south and west, to Malone and Montreal, but it passed six miles to the west of Saranac Lake. This was remedied by building the Saranac Branch from Lake Clear Junction (originally called "Saranac Junction) to a station on the west side of Broadway's north end (then known as "Depot Street"), at the north end of Mills Avenue and St. Lawrence Avenue (directly across the tracks from today's (2010) Kinney Drugs). Here the Saranac Branch ended in July 1892, until August 1893, when the line was extended half a mile to reach the tracks of the Chateaugay Railroad, which was originally built as a narrow gauge railroad that reached Saranac Lake from the northwest in 1887; this line was taken over by the Delaware and Hudson and converted to standard gauge.

By October of 1899, Depot Street was re-named Broadway and the former "Railroad street" was give its present name, "Depot Street", and the original wooden depot was replaced for passenger use by Union Depot in 1904.

Railroad passenger service to Saranac Lake was discontinued by the New York Central in 1965.

The New York Central offers excursion rates to Ottawa and return on account of the Ottawa Fair. Central Canada Exhibition, September 18 and 30, from Malone at $2.95, Constable $2.80, Loon Lake $3.30, Paul Smiths $4.10, Saranac Lake $4.40, Tupper Lake $4.75. Tickets good going only on the morning train (No. 635) on the dates named, returning leaving Ottawa on or before September 24th. Full particulars may be had from N. Y. C. agents.

Railroad service is excellent. Trains leaving in the morning reach New York early in the evening. Evening trains have sleeping cars attached running through to New York either by the Chateaugay division of the D. & H. via Lake Champlain and Saratoga or by the Adirondack division of the New York Central via the west side of the wilderness.

SARANAC LAKE —A sad, accident occurred on the New York Central about two miles south of Gabriels Station when Sunday afternoon Sam Martin, a prosperous farmer of Vermontville, accompanied by his wife and daughter and his hired man were visiting his daughter, who lives between Gabriels and Rainbow stations were returning home in their automobile and were struck by the train, killing Mr. Martin instantly. Mrs. Martin received two broken legs and a broken arm and cannot live. The other two were uninjured.

NO RR STOP AT SARANAC INN

The Public Service Commision today authorized New York Central Railroad to discontinue all services other than the handling of carload freight at its Saranac Inn Station in Franklin County. Carload freight shipments will be handled on local team tracks but under jurisdiction of the railroad agent at Lake Clear Junction.

Since 1950, the station has been on a part-time caretaker basis during Winter months and has had an agent on duty only during the Summer vacation period.

At a public hearing, it was testified that Saranac Inn Hotel and the State Conservation Department Fish Hatchery are the principal users of the station's facilities and that each could be served conveniently at Lake Clear Junction.

Railroad testimony was also to the effect that the station has been operated at a loss and that it proposed to remove the station building and the passing track there. Its petition was unopposed.

The action follows a similar permission to the New York Central to discontinue service at the Gabriels station.

James Gillmett, supervisor of the Town of Brighton and superintendent of grounds at the Saranac Inn hotel, told The Enterprise this morning that a hearing had been held in Pittsburgh some weeks ago, but that it was at the time of a big snow storm and it had been impossible for him to get to Plattsburgh to testify.

The discontinue will make it necessary for the Inn to get most of its freight, all its mail and all its passengers at the Lake Clear station, which is three miles farther from the Inn, Gillmett said.

It will make the servicing of convention train passengers especially difficult, Gillmett explained, because it had been possible to shuttle them to and from the Inn station in several cars. With the longer run, he said, other means would have to be found.

LOCAL FREIGHT SHIPMENTS WILL BE DECENTRALIZED

Under this plan, ticket agents only will staff the railroad's station at Lake Placid and Saranac Lake. All resident agency service will be discontinued at Sabattis and Lake Clear Junction and passengers boarding trains at these stations may either purchase tickets elsewhere or pay fares on the trains. These two stations and the present non-agency carload only stations at Ray Brook and Gabriels will continue as satellites of the Tupper Lake service center.

Under the new plan, carload freight service will be continued at all six points and pickup-and delivery service for less-than-car-load-freight, now provided at Lake Placid and Saranac Lake, will be extended to all points involved.

The railroad must establish an Enterprise telephone number through which area freight patrons may make toll-free calls to its Tupper Lake station. Agency service is provided at Tupper Lake from 6 a.m. until 10 p.m. daily.

In a report to the Commission, Examiner Jacob I. Rothstein says the change in status of the Adirondack Division stations involved in today's order is designed to streamline freight operations and to expedite service to the railroad's freight patrons. To accomplish this, a traveling assistant agent will make daily visits, Mondays through Fridays, to freight patrons in Saranac Lake and Lake Placid as needed, to those in other communities.

The railroad's team track at Stony Wold, no longer used, may removed. Similarly, the railroad may discontinue its non-agency station at Saranac Inn, at which, according to the P.S.C., no business has been handled for several years.