New York Route 86 (NY 86) is a 39-mile long state highway that runs from Paul Smiths to Jay, New York. Much of the route follows the Old Military Road.

Early road work was done by the residents who lived along the road using equipment purchased by the town. In 1894, the Town of Brighton bought a stone crusher and put a crushed-stone surface on the road from Paul Smiths to Gabriels, and in 1916, the town put asphalt down on that section, the first paved road in the town. 1

The NY 86 route designation was established in 1930 when the state renumbered most state routes, largely replacing a realigned NY 3. The portion of NY 86 north of Harrietstown was once NY 192. The section from Saranac Lake to Lake Placid is known as the Sara-Placid Highway.

The section from Peck's Corners to the north end of Broadway, built in 1953, is named Lake Colby Drive. That section, and perhaps a bit farther north, was built on the abandoned right-of-way of the Mohawk and Malone Railroad, which accounts for its level grade. 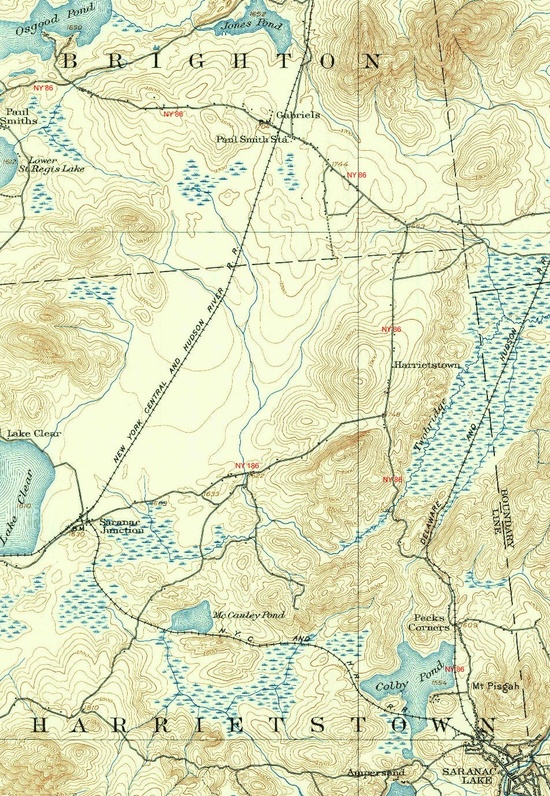 ROUTE 86 PLAN UP FOR HEARING ON OCTOBER 28

Final plans for the improvement of the continuation of Route No. 10 coming down from Malone were made public today. They will be Up for approval at a public hearing to be held at 10 a.m. on October 28 in Malone.

The new road, actually a part of Route No. 86, is the result of the endeavors of Assemblyman Robert Main and the Franklin County Board of Supervisors headed by Hayward Plumadore, of Harrietstown. Completion of the highway improvement by the State will leave only one "bad entrance" to Saranac Lake — Route No. 3 from Tupper Lake.

And, Mr. Plumadore said today, this highway job is in category one on the State Highway Department's agenda.

The plans for the Route No. 86 improvement show a 1.79-mile highway extending from the point north of the Cohen store where the old railroad track crosses the present road to Durgan's.

In as straight a line as possible the proposed road runs from Cohen's store to he old New York Central Railroad tracks, then deviates from the present road and follows straight along the road bed of the old tracks, past the site of the old Latour ice house, along the edge of Colby Pond in as straight a line as possible, still following the old road bed to a point back of Durgan's. This is where the plans released today end.

To build the new road, varied properties will have to be acquired, including land owned by the railroad, Leon Latour, Mrs. William Morris and J. Bronson Trevor.

[T]he Village Trustees have another problem—getting a name for the new State road from Lake Colby that is now under construction.

Judge Gordon Vosburgh, representing the Harrietstown Town Board, attended last night's meeting of the Trustees to suggest that the Town and Village Boards hold a joint meeting to name the new entrance to town.

"The road will be finished in December," Judge Vosburgh said. "and it if it has no name there won't be any mail deliveries on it."

Mayor Anderson suggested "Morris Road", in honor of the late William Morris, or "Northwest Bay Road". Trustee Vernon Wamsganz mentioned "Lake Colby Boulevard". No action was taken by the Trustees who asked for suggestions from the public.

1.8 Miles in Franklin To Be Reconstructed

A low bid of $252,609.50 from MK. Engineering Co., Inc., of Albany, was received at Albany lately by B.D. Tallamy, New York State Superintendent of Public Works, for construction with asphalt concrete on 1.8 miles of Route 86 northward out of Saranac Lake toward Harrietstown. State engineers had estimated cost of this work at $281,000 will begin in the village of Saranac Lake just north of the intersection of Ampersand Avenue and Broadway and proceed northerly on Broadway for about 1,000 feet before cutting off to the west of existing Route 86.Proceeding on new location generally northwesterly along the east shore of Colby Pond, the route will rejoin existing Route 86 about 1,900 feet north of Pecks Corners, where the project will terminate.