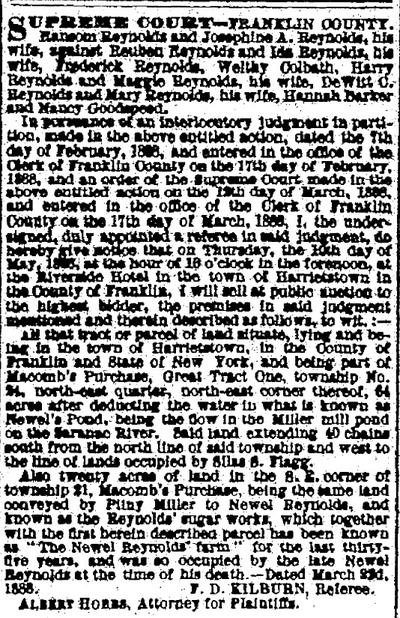 Died: before June 1886 when Ransom & wife Josephine sued his siblings over land and the "Newel Reynolds Farm"

Newell Reynolds was a son of Newell Reynolds, Sr. (1775-1837) and Hannah Brown (1784-1855), and brother of Ransom N. Reynolds (1812-1813) buried in Keene West Cemetery, Keene, New York.  He was one of the earliest residents of Saranac Lake. He had a 64-acre farm, to which he added twenty acres purchased from Pliny Miller that he used as a sugar orchard. He lived on his farm for 35 years prior to his death. 2 He is buried in Pine Ridge Cemetery.

He was elected an overseer of Harrietstown in 1868.

With Patty, Newel Reynolds had a daughter, Mary Ann, who was born July 22, 1835, and died Jan. 16, 1843. Mary Ann Reynolds is the first known burial in Pine Ridge Cemetery. The 1880 U. S. Census shows Patty is the wife of Oliver B. Kent, living in the same house is Harry Reynolds the son of Patty, Nancy Turner (?) and her children Stephen A. & Franklin.

He was elected overseer of the Town of Harrietstown district 5 in 1868. 3

To the above named, defendants: —Action for partition :—You are hereby summoned to answer the complaint in this action, and to serve a copy of your answer on the plaintiffs’ attorney within twenty days after the service of this summons, exclusive of the day of service; and in case of your failure to appear or answer, judgment will be taken against yon by default for the relief demanded in the complaint. Trial to be held in the County of Franklin.

To Hannah Barker, De Witt C. Reynolds and Mary Reynolds, his wife, defendants:—The foregoing summons is served upon yon by publication pursuant to an order of Hon. Horace A. Taylor, County Judge of Franklin County, dated the 10th day of August, 1886 and filed with the complaint in the Office of the Clerk of the County of Franklin, in Malone village in the County of Franklin in the State of New York.

The object of this action is to make partition according to the respective rights of the parties, and if partition can not be made without; great prejudice to the owners, then for a sale of the following described property: The Reynolds farm, being 64 acres in township No. 24 and 20 acres in township No. 31 in the town of Harrietstown, in Franklin County, being the same farm on which Newel Reynolds resided for thirty-five years, and at the time of his death.