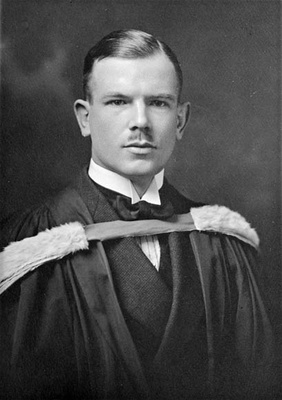 A brick at the Saranac laboratory has been dedicated in the name of Norman Bethune by Jean Mason. 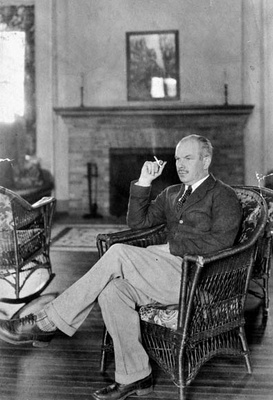 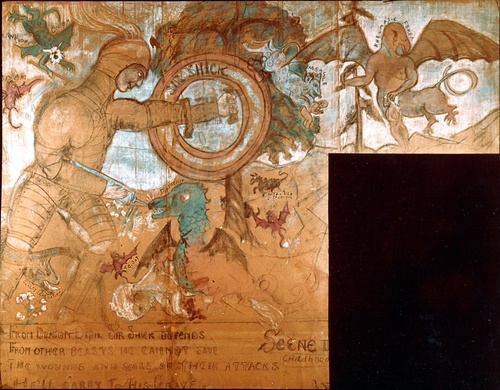 One of the Bethune Murals. Five by sixty feet long, drawn on brown paper mounted on the walls of his cure cottage, the black area is where a doorway interrupted work. The Monsters are labeled Scaley Scarlatina, Diphtheria, Infantile Paralysis, Rheumatic Fever, Whooping Cough, Measles, and the numerous "TB Bats". Sir Shick is named for American pediatrician Bela Shick, who developed a test for Diptheria. The caption reads "Scene II, Childhood. From Dragon Diph. Sir Shick defends, From other beasts he cannot save, The wounds and scars of their attacks, He'll carry to his grave." Born: March 3, 1890

He was born in Gravenhurst, Ontario, the son of an idealistic minister and a missionary. He was named for his grandfather, a surgeon, and from an early age he wanted to follow in his footsteps. He attended the University of Toronto, studying medicine, but in 1914, one year prior to getting his M.D., he joined the Canadian armed forces as a stretcher bearer on the day Canada declared war. He was wounded on the battlefield at Ypres, and was returned to Canada where he completed his degree in 1916. He then enlisted in the British Navy as a surgeon. Six months before the Armistice, he transferred to the Canadian Flying Service in France. After the war, he supplemented his income as a hospital intern by working as a free-lance art dealer in London, importing paintings from Europe.

In 1924, at 34 he married the 22-year-old daughter of a prominent Edinburgh family, Frances Penny. The marriage was turbulent. After a year traveling in Europe, they moved to Detroit and established a practice. His practice was slow to develop, but he eventually came to the attention of a wealthy doctor with wealthy clients, and found himself a sudden success. Then he was diagnosed with tuberculosis. Convinced that it meant that he would die, he told his wife that they must divorce, so that she could continue her life; he moved back to his parent's home in Canada.

He applied for admission to Trudeau Sanatorium, and on December 16, 1925, he was admitted. In the 1920s the established treatment for TB was total bed rest in a sanatorium, a regimen that was difficult for many young patients, especially for Bethune. He and his three roommates in Lea Cottage, doctors all, violated with abandon the rules established to keep patients quiet and rested. While a patient, he painted a series of murals on brown paper depicting his own life and predicting its outcome.

While convalescing Bethune read about a radical new treatment for tuberculosis called pneumothorax, that involved artificially collapsing the diseased lung, thus allowing it to rest and heal itself. The physicians at the Trudeau thought this procedure was too new and risky, but Bethune insisted. 1 He had the operation performed and made a complete recovery within two months. He was thirty-six years old, and felt re-born. He proposed marriage to Frances again, by telegram as he left Saranac Lake for Detroit. Two years later, they re-married, only to divorce again four years later.Edward Livingston Trudeau

During the two months after the operation he taught a course in Anatomy and Physiology for the D. Ogden Mills School of Nursing. He also envisioned a school for patients, to keep their minds occupied and to prepare them for re-entry to the world, an idea that failed to take root at the time, but, ten years later, would be embodied in the Saranac Lake Study and Craft Guild.

He returned to Detroit briefly, but he was determined to focus his career on helping those with tuberculosis, so he returned to Saranac Lake to work at Ray Brook Sanatorium for almost two years, and then applied for a position at the Royal Victoria Hospital in Montreal, where he was appointed to the teaching staff. From 1929 to 1936 Bethune perfected his skills in thoracic surgery and developed or modified more than a dozen new surgical tools.

An early proponent of socialized medicine, he formed the Montreal Group for the Security of People's Health. In 1935 he went to the Soviet Union to observe their health care system. At this time, he joined the Communist Party of Canada, though was not convinced that communism was the answer to the world's problems.

In 1936, Bethune accepted an offer to head the Canadian Medical Unit in Madrid during the Spanish Civil War, where he developed the first mobile blood-transfusion service in Spain, a precursor to the later MASH units.

In 1938, he worked with the People's Liberation Army during the Second Sino-Japanese War, where he ran a mobile field hospital for Mao Tse-tung. Bethune cut his finger while operating on a soldier bare handed; he contracted blood poisoning and died of his wounds on November 12, 1939. Mao Tse-tung wrote about Bethune in the Little Red Book, and he is memorialized in China, and in Montreal.

1. Dr. Sidney Blanchet was administering the pneumothorax treatment to Dr. Edward Livingston Trudeau, founder of the Adirondack Cottage Sanitarium, before 1915 and probably as early as 1910.