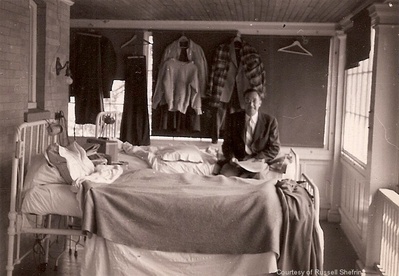 Trudeau, May 1947: "Lord of all he surveys – and it ain’t much. You should see our beds when they haven’t just been made by us. Doctors are not born housekeepers.” 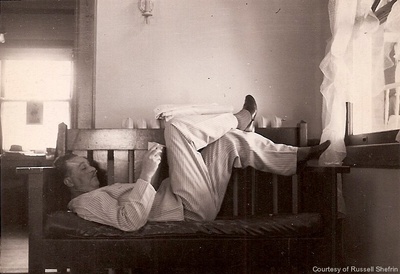 Trudeau, May 1947: "Temp Time. Wotthehell – it’s always normal anyway. Notice that the good doctor always likes to have a little something on his stomach – usually Best and Taylor’s Physiological Basis of Medical Practice.” Born: July 5, 1907, in Brooklyn

Dr. Norman Shefrin worked at the Ray Brook State Tuberculosis Hospital and later became associated with the Will Rogers Hospital in Saranac Lake.  He was a World War II veteran. 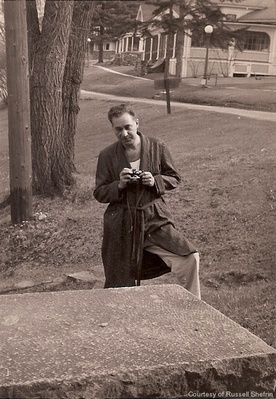 Trudeau, May 1947: "Dr. Cardpack with gun and camera through upper Saranac.” My late father, Norman Shefrin was born in Brooklyn, N.Y. on July 5, 1907, the youngest of six. His beloved older brother, William, was killed in World War One. For heroism in the incident, which resulted in his death, William was awarded the Distinguished Service Cross, posthumously. According to the family story, the result of all this was that the government provided some money, eventually enabling my father to attend medical school in Vienna, Austria, which he did after trying out other careers, including that of shoe salesman. 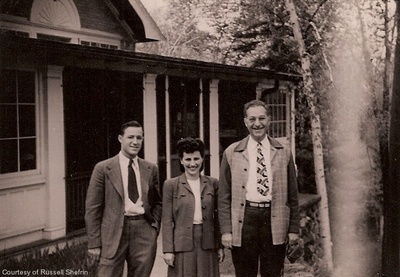 Trudeau, June 1947: "Shefrin & friends”. (My dad is on the right. I don’t know the identities of the other people) 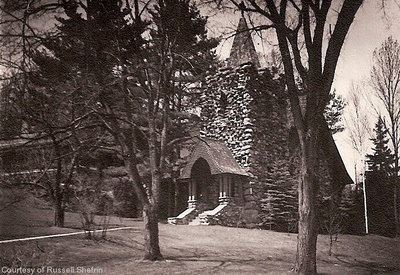 Trudeau, Baker Chapel Unfortunately, a couple of years after my Dad’s graduation as a physician, World War Two began. Soon, he was drafted into the Medical Corps of the U.S. Army. It was during his service in the European campaign that he contracted pulmonary tuberculosis. The search for a cure would ultimately take him to Trudeau Sanatorium in the late 1940s. This was in the era before anti-TB drugs were well established. Therefore, during his stay at Trudeau, my Dad underwent a surgical procedure known as a “phrenic nerve crush”. This operation causes the diaphragm on the affected side to become paralyzed, which in turn allows the lung on that side to collapse and, in so doing, to close off the tuberculosis cavity, allowing it to heal. While successful, the procedure left him without the stamina needed to return to medical practice in his native New York City.

His wife, Anne, my mother, having joined him in Saranac Lake, he obtained a position on the medical staff of Ray Brook State Tuberculosis Hospital. He remained there until his retirement in 1968. Thereafter, he and my mother lived on Petrova Avenue, “in town”, as we Ray Brookers called it, for a number of years before moving to Glens Falls, where he passed away two days after his eighty-ninth birthday.

My Dad had a gentle sense of humor. It is evident in the inscriptions on the backs of the accompanying photographs, written as he adjusted to his new surroundings, far from the places he had lived. I assume that the captions on the pictures were intended for my mother, so she could get a sense of what daily life was like at Trudeau. (Spelling is exactly as in the original. I told you my Dad had a sense of humor!)

GLENS FALLS – Dr. Norman Shefrin, 89, died.Sunday, July 7, 1996, at his residence. Shefrin had worked at the Ray Brook State Tuberculosis Hospital and later became associated with the Will Rogers Hospital in Saranac Lake.

Mr. Shefrin attended medical school in Vienna and Graz, Austria. He served his internship and residency in Christ Hospital, Jersey City, N.J. and was a diplomate of the National Board of Examiners.

From 1952 to 1968, he was a member of the medical staff at the Ray Brook State Tuberculosis Hospital and then at the Will Rogers Hospital. After moving to Glens Falls in 1983, Mr. Shefrin continued in limited clinical practice. Once fully retired, he was a volunteer for the American Red Cross in Glens Falls. Survivors include his wife of 53 years, Anne B. Shefrin of Glens Falls; one son, Russell Shefrin of Colden, N.Y.; brie daughter, Gail Grote of Matawan, N.J.; three grandchildren, Jason Grote of Matawan, N.J., Tracy-Ann Gugliuzza of Hamburg, and Sandra Babcock of East Aurora; three great-grandchildren; and several nieces and nephews.

Several brothers and sisters and one grandson predeceased him.

Graveside services will be conducted at 2 p.m. Tuesday. July 9 at the Pine View Cemetery in Queensbury.

Calling hours will be held from 1 to 2 p.m. Tuesday at the Regan and Denny Funeral Home. Quaker Road, Queensbury. Memorial donations may be made to Hospice of Saratoga, Warren County Division. 179 Lawrence St., Saratoga Springs, N.Y. 12866.

The family has requested that flowers be omitted.