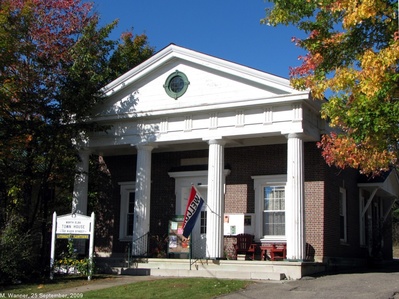 North Elba Town House is the only Greek Revival style building in Saranac Lake. It is a very good example of that particular type of architecture.

Architect Paul Jacquet, who also designed the Mulflur Block on Main Street and St. Bernard's School, in 1927 drew the plans for a Town House, auxilliary to the North Elba Town Hall in Lake Placid. Erected at the peak of Saranac Lake's prosperity and civic pride, the Neoclassical Town House was meant to expedite election and judicial processes in the northeast portion of the town, so that residents in Saranac Lake would not have to travel the ten miles to Lake Placid. There may also have been an element of rivalry with the Town of Harrietstown, a perceived political need for North Elba to assert its presence in Saranac Lake, since the division of the village into two counties and three towns has been a thorn in the side of local government and the focus of repeated studies and petitions since its inception. Jacquet, who married William Callanan's daughter Marie and thus associated with one of the most influential contracting firms in the Adirondacks, often worked directly through Branch and Callanan, though he is also known to have worked for Scopes and Feustmann. In this instance, the contractor was Leo Malone from Lake Placid.

The full height porch supported by Doric columns beneath the front-facing gable gives the little Town House the appearance of a miniature Greek temple. Over the years, space in the building was made available for rent. One notable tenant was the Bulova Watch Company, which used the main room for a watch assembly facility for an extended period ending in the mid-1940s. Reportedly, the assemblers were T.B. patients. During the 1980 Olympic Winter Games in Lake Placid, an Olympic stamp display occupied the Town House.

At a meeting of the North Elba town board held Monday afternoon at 2 o'clock, Supervisor Willis Wells presiding, the contract for the construction of the new town hall in the village of Saranac Lake was awarded to Leo A. Malone, Lake Placid contractor, whose bid was $16,948.68. The new structure will serve that portion of the town of North Elba that lies within Saranac Lake village.

Mr. Wells states that the new structure will be brick in pleasing colonial design, one story in height. It will contain justice's offices, election rooms, a jail, furnace room and lobby.

Paul Jaquet of Saranac Lake is the architect. Work began on Tuesday morning at 7:30 with a force of workmen busy under the general direction of Leo Malone. The structure is to be completed in 70 days. It is being erected on the lot opposite the building now used as a town hall on Lake Flower avenue, almost directly across from the Thomas boathouse corner.

With the completion of this building the town of North Elba will have two town halls, one in Lake Placid and the other in Saranac Lake.

Bids were submitted by four other contractors, but Mr. Malone's bid was low.

Bids are to be asked soon, it is stated, for heating, plumbing, and wiring in the new town hall. Mr. Malone's bid covers general construction only.