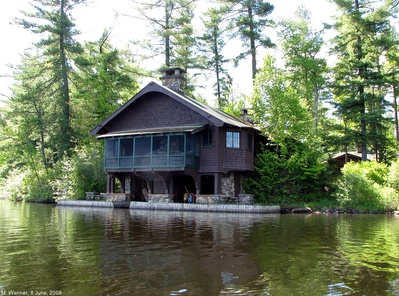 The Great Room, or Boathouse Lounge, at Northbrook Lodge 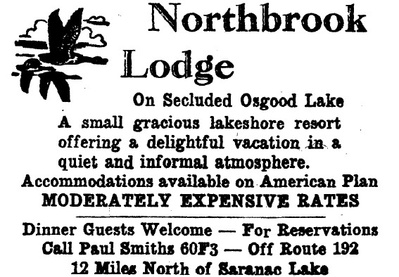 Exploring the architecture of Northbrook Lodge

Northbrook Lodge was built for Canadian Senator Wilfrid L. McDougald by, Benjamin A. Muncil. Unlike White Pine Camp, no other architects are ever mentioned in connection with NBL, suggesting that Muncil may have designed the camp himself. Another indication of Muncil's design work, suggested in a 1997 article on the builder written by architectural historian Mary Hotaling is "that only a designer who was also the builder would create such immensely complex roofs [as the one in NBL’s boathouse lounge], because no architect would have that much confidence in a builder."

The current acreage comprising the camp at Northbrook Lodge was acquired in pieces. The first bit was the five acres purchased in 1889 by Henry Wilson.

A decade later, in 1899, Basil Wilson 1 bought Henry’s acreage along with an adjacent five-acre lot, "together with buildings and improvements situated thereon" — none of which are part of the camp today.

The Japanese Pavilion at the World’s Columbian Exposition in Chicago, held in 1893, had generated a tremendous stir in the architectural world, including those architects designing Adirondack Great Camps. "Other people were doing Japanese in the Adirondacks at this time," said [Howard] Kirschenbaum, "but not quite like what was done here."

Like the Japanese building at the Chicago exposition, the low, squat buildings at Northbrook Lodge spread out like a series of pavilions connected by open, covered walkways. The designer has used the typically Japanese "irimoya" (two-level) roof throughout the camp. And Scandinavian verge boards, placed on the inside of the angular peaks of the camp’s roofs, soften those sharp angles with their gentle curves in a way that some say is reminiscent of the scale and angles of Japanese architecture.

The insides of the buildings at NBL, however, are as different from the spare Japanese style of interior furnishing and decoration as they are from the stereotypical birch bark-and-twigwork rustic style so often thought of as the Adirondack Great Camp mode. The library and dining room, in particular, look more like what one would expect to find in the Hudson Valley country home of some early 20th century man of means: all dark wood and built-in cabinets with beveled-glass doors.

The interiors of the NBL guest cabins are simple enough, although hardly examples of anything that might be called "Adirondack rustic":

The last stop on our walk through the camp at Northbrook Lodge was the climax of our visit: the NBL boathouse lounge, or "Great Room."

It is a big, two-level, open room with a bar above, tables below, and twin alcoves with card tables. Through a screen door to one side of a fireplace is a cozy porch looking out on Osgood Pond.

"The living room at White Pine was a kind of study or experiment for one of the grandest rooms in the Adirondacks, over at Camp Topridge," said [Howard] Kirschenbaum. "The Great Room here was another such study.

"This room is, I think, a Muncil masterpiece, in every respect.

"The beam system ... foreshadows what would come, on a much larger scale, at Topridge a few years later," Kirschenbaum said. "He [Muncil] was excellent at creating these large open spaces without posts in the middle.

"Another unusual touch is the brainstorm siding on the ceiling, cut a lot thicker than would be typical on the exterior of a building. There are only a few rooms in the Adirondacks where you’ll find this, including the Great Room at Camp Topridge.

"I think this is one of the greatest Great Rooms in the Adirondacks," Kirschenbaum enthused.

As with any property that has been built upon and inhabited for more than a century, Northbrook Lodge passed through several owners before finally landing in the hands of the Schwartau family, which has held it since the early 1950s.

As we noted earlier, Senator Wilfrid McDougald bought the property in 1919 and hired Ben Muncil to build the camp as we see it today. McDougald involved himself, however, in an insider- trading scheme that ultimately forced his resignation from Parliament and led him nearly to bankruptcy. Two years after McDougald’s 1942 death, his wife was forced to sell Northbrook Lodge.

The buyer in 1944 was O. Rundle Gilbert, an auctioneer — who had already re-sold it to one Anton Rost. The following year, Rost sold the camp to Rudolph S. and Eva Reese.

After one, final short-term pair of owners — Edward and George Sherman, who acquired the property in 1949 — Northbrook Lodge was sold in 1952 to William P. and Norma D. Schwartau, the parents of its current proprietor, Laura Jean Schwartau. William Schwartau was a well-known Manhattan restaurateur, and he and his family have operated NBL as a rustic, "partial American plan" resort. In return for a modest, fixed price, guests have total run of the now-10-acre property, use of the canoes and kayaks stored in the boathouse, and two meals a day prepared by the Northbrook staff: breakfast and supper.

Operation of the camp resort is a summer job for Schwartau, an adjunct theater instructor at Plattsburgh State University, and her husband, Randall Swanson, an associate professor of forestry at Paul Smith’s College — but one that they love.

"This is our summer vacation," quipped Swanson during our tour.

Howie Kirschenbaum remarked several times during our tour upon how lucky Northbrook Lodge and White Pine Camp were that they had not been broken up in the 1950s or 1960s, as were so many other camps in the region. Subdivision, he said, would have utterly erased their character as Adirondack Great Camps.

PAUL SMITHS — The home of Bill Schwartau on Osgood Pond here was destroyed by a fire which had consumed the structure by the time the firemen arrived.

The home of Bill Schwartau was, reported to be a total loss, despite about five hours put in by 20 members of the Paul Smiths-Gabriels Fire Department.

The crew arrived at the Town of Brighton residence, off White Pine Road, at 5 p.m., and found the building ablaze. Two portable pumps and 14,000 gallons of water were used at the scene.

The house was the gate house to a Northbrook Lodge building.

Firemen were called back to the scene after it flared up again about 10:30 p.m.

One firemen, Edward Hoyt, was injured when a cinder flew into his eye.

Thank you for your message, Lelia. We would love to see what information you have! Please feel free to contact me at [email protected] Thank you! -- Amy, August 6, 2015

1. A reader suggests that "Basil's last name was Gordon not Wilson (Lelia's last name before she re married)"