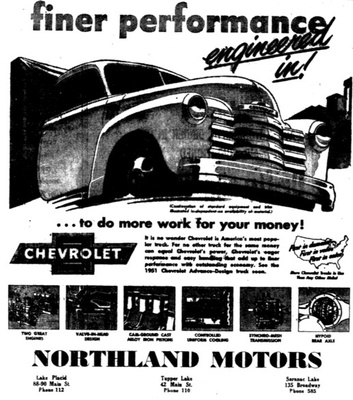 Northland Motors was a Chevrolet, Cadillac and Oldsmobile dealer.

Robert Reiss, president of Northland Motors, Inc., announced that the sale was made in two parts. Mr. Cole purchased the facilities at Ray Brook from Reiss Properties, Inc., as well as the automobile dealership. No figure was given of the cost. According to Mr. Reiss, the sale does not affect Northland Chevrolet in Tupper Lake, which is a separate corporation.

Mr. Cole announced that he will continue sales and service of Chevrolet, Cadillac and Oldsmobile lines. Mr. Reiss stated that arrangements have been made for "servicing of any existing warranties on new or used cars sold by Northland Motors."

Northland Motors, Inc., was founded in Lake Placid in 1932 by the late Julian Reiss, under the name Lake Placid Garage. In 1940 the corporation purchased the Chevrolet franchise in Saranac Lake from James Galloway, located at 135 Broadway.

In 1958 the two firms merged and relocated in newly-constructed facilities at Ray Brook. Robert Reiss entered the business that year as secretary of the corporation. He assumed the office of president on the death of his father in December, 1959.

Mr. Cole has moved to Lake Placid with his wife and two daughters, Susan, 13, and Kathryn, 11. Mrs. Cole is the former Elizabeth Hesseltine, of Jay.

Mr. Cole recently sold the Chevrolet dealership which he has operated in Auburn for the past five years. Prior to that he had the Lake for 11 years. [sic]