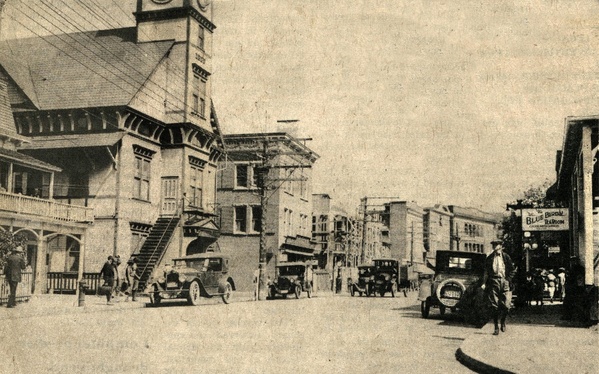 From the program for an Odd Fellows Minstrel Show held at the opening of the new Town Hall on October 3 and 4, 1928:

. . . The first use to which the building had been put was that of a school. The old school house was outgrown and three rooms in the town hall were engaged to take care of the older grades. The second floor, which contained the auditorium with a seventeen foot stage, was soon the center of the social life of the village. In it dances, suppers and festivals of every sort were held. As the demand for amusement became greater it was leased to F. M. Jackson, under whose able management a high class of one night stand and repertoire companies were brought here. Several stars whose names have been outlined in lights along Broadway trod the boards in the old town hall before they were discovered by the big cities. Lecturers of national reputation on religious, educational or political subjects were heard here.

For several months the congregation of St. Bernard's church worshipped in the town hall, during the construction of their present edifice. Moving pictures held the boards for a time and later the auditorium was taken over by the Independent Order of Odd Fellows who with the Kiwassa Rebekah Lodge No. 33, occupied it until the building was destroyed. . . .

[The whole article can be found on the page for the Old Harrietstown Town Hall.]

—W. F. Mannix, of Saranac Lake, formerly editor of the Pioneer, writes that he is to make a public declaration of his late decision for temperance at the opera house at Saranac Lake, Wednesday, March 28th. He proposes to take the platform for temperance and make of it a lifework. Old friends will wish him God speed in the work. — Farmer.

The Malone. Amateurs presented “The Broken Link" in Saranac Lake Opera House on Friday evening-last in a most satisfactory manner. The cast was made up of the best talent that Malone affords and they each did credit to themselves. We can truthfully say that it was the best amateur play ever presented in our Opera House by outside talent.  --Adirondack Enterprise.

--The Vaudeville Company of the 21st has been booked by F. M. Jackson of the Saranac Lake Opera House for Jan. 31st and Feb. 1st, during the ice carnival.

Spencer's, orchestra has been engaged for the 3d grand annual masquerade ball at the Saranac Lake opera house January 31st., to be given under the opera house management. The costumes for the occasion will be furnished by a city costumer. The orchestra has also been engaged for a select party and dance to be given by Mrs. W. S. Lawrence to her friends at Lawrence Opera House, Moira, February 14th. A special train will be run to accommodate friends from Malone.

…On Monday evening the opera [Erminie, that had played in Malone earlier, and was performed by the Malone Opera Company accompanied by the Mozart orchestra of Potsdam] was in the opera house at Saranac Lake and, as usual, our amateurs received a hearty reception. A large audience was in attendance, and the play went off as smartly as it did in Malone. After the entertainment a dance was enjoyed. The expenses for the three performances were about $700 and the receipts were about $50 larger—an excellent showing. Heretofore it has not been possible to come out even.

Spencer's full orchestra has been engaged to play at a Thanksgiving ball at the Saranac Lake Opera House Thursday night.

Wallace Murray and several other capitalists have been considering the advisability of erecting a $25,000Opera House in the village of Saranac Lake providing the authorities would exempt the property from taxation for a certain term of years.

The minstrel show, which was so successfully given by the patients of the sanitarium February 11th, will be repeated in the Saranac Lake opera house on Wednesday, April 2, for the benefit of the Sanitarium library fund. The show has been strengthened in many ways and much new material added. The following well known ladies have consented to act as patronesses: Mrs. TRUDEAU, Mrs. TREMBLEY, MRS. KENDALL, Mrs. RIDDLE, Mrs. MILLER, Mrs. HARDING, Mrs. J. S. WILLIAMS and Miss DELONGUE. Many other prominent people have signified their intention of doing the same. Seats are selling rapidly. 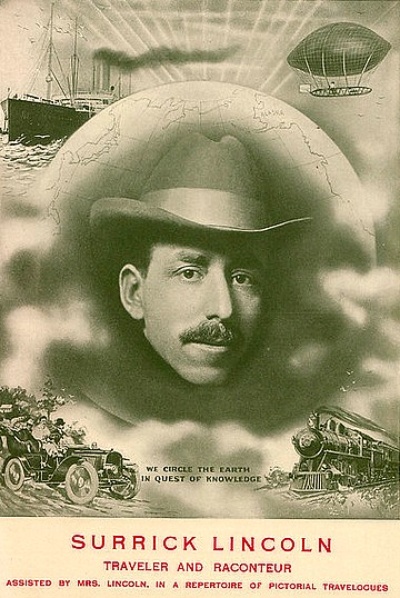 Undated brochure from Flickr
When the Lincolns appeared in Faust ten years later, the October 25, 1912 Tupper Lake Herald wrote
"Surrick Lincoln, originator of the famous "Lincoln Travelogues", assisted by Mrs. Lincoln, will appear with his highly interesting and instructive motion photography in Faust in the near future, under the auspices of the Junction school. It is unnecessary to state that our school will benefit greatly by the appearance of a crowded house at this entertainment. Further announcements will be made later."Adirondack Enterprise, July 17, 1902

Items from the Saranac Lake column.

-- The Saranac Lake Social & Athletic Club will give a dance in the Opera House on Tuesday evening July 29th. Baillargeon's orchestra will furnish the music. The tickets are but 50 cents a couple.

-- Mr. and Mrs. George Surrick Lincoln are to appear in our Opera House, Ju[ ] 20th, and Aug. 6th in two very interesting entertainments; "Alaska," and "Beauty Spots in America" ; illustrated with stereopticon views; and motion pictures; the whole supplemented with songs by Mrs. Surrick Lincoln. The entertainments are highly praised [by] those who have seen and heard the[m]. The Chicago Evening Journal says: "The annual reception of the Masonic bod[ ] of this city was held Friday evening. The entertainment was furnished by "T[he] Lincolns." Mrs. Lincoln is an artist [of] great versatility. Mr. Lincoln, with [ ] lime light and his wonderful real[ ] stories of travel, together with the [fa]cinating and unique motion pictu[res] was well received and appreciated."

--"Fantasia" an operatic minstrel performance was given by the children of the village last Friday night at the Opera House, under the direction of Prof. Chas. Dolan, and was both an artistic and financial success. The children did remarkably well for the short time they were under Prof. Dolan's tutorship. All of the big New York City successes were introducted [sic] prettily costumed and cleverly arranged. Roy Raymond the son of one of our summer visitors made the individual hit of the performance. The burlesque on "Tell me pretty maidens" by a number of young men from Rainbow Camp, also made a big hit. It was announced at the performance that Prof. Dolan would arrange a minstrel show for the local Tribe of Red Men, the show to be given at once. Prof. Dolan on second consideration has decided to postpone the performance until later on. as it would be impossible to place the show on as it should be, upon such short notice.

The Event of the Season.--Benefit of the Library.

Arrangements are being perfected and rehearsals have already begun for an elaborate production of that most successful of all the Gilbert & Sullivan Comic operas--H. M. S. Pinafore or The Lass Who Loved a Sailor. The chorus will consist of about 50 voices made up of the leading singers of this town and vicinity and the cast will be in competent hands drawn from the best soloists that Saranac Lake affords assisted by prominent artists from New York and Boston. Special scenery made for this opera showing the deck, cabin, sails, masts, etc. of a British Man of War will be used to the limitations of the Saranac Lake Opera House stage. New costumes will be a feature and the whole opera will be stages and given with careful attention to detail. The stage business and effects given same as in the original productions in London. The affair is to be given two nights in the week of Aug. 4th under the auspices and for the benefit of the Adirondack Library. C. E. Macomber, of Boston has been secured to direct and stage the piece and from the unusual interest manifested it is sure to be one of the largest and best affairs ever given here.

An entertainment was held last evening in the opera house at Saranac Lake for the benefit of the San Francisco sufferers and a good, round sum was realized. George Golden, the famous monologist, who is spending the season at Saranac Lake was the star feature of the evening. The opera house was filled to overflowing.

Francis Fisher Powers had a fine recital-musicale in the opera house at Saranac Lake Monday evening. and is to have one at Plattsburgh this afternoon and evening.

Judge Kellogg has held, in the Ogdensburg Opera House case, the building being owned by the town, that the town hall commissioners cannot operate the opera house with traveling shows on a percentage basis in the future as they have in the past, but must lease the house outright to traveling troupes that desire to play there. An injunction order has been issued accordingly. How will this affect the Saranac Lake and Chateaugay opera houses? The town hall commissioners have no power to operate a play house or go into the theatre business as representatives of the town and probably town boards are in the same position.