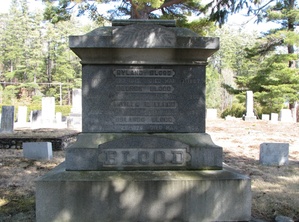 Orlando Blood established the Riverside Inn. Because he was known as "Lon," it may be that later on his activities were attributed to a misnamed Alonzo Blood.

In 1860, on the eve of the Civil War, Orlando Blood opened the third hotel, Blood's Hotel, later called the Riverside Inn, in the Village of Saranac Lake, on the shore of the millpond. The Adirondack resorts prospered throughout the war as men escaping the draft and those who had paid others to take their places on the battlefield retreated to the mountains. 1

The Bloods came originally from Lewis, Essex County. They had kept a hotel in Keene Center for several years but sold it in 1860 and moved to Saranac Lake. There were five of them Arvilla E. Blood, Ryland, George, Pascal and Orlando. The latter was the acknowledged head of the family, and outlived them all. "Lon" Blood, as he was called, made himself and his hotel widely known. He first leased it from John J. Miller, who had built it. He bought it with eighty acres in 1865 for $2,115. This was the basis for his later wealth, for the hotel paid well, and the growth of the village began to make much of his land very valuable. He sold one acre on Main Street to guide Lucius Evans for one hundred dollars. This was such an unheard of price in those days that it caused amazement and comment throughout the community, and people drove in from miles around to gaze at the notorious acre.

Blood's hotel opened on a Fourth of July and he gave a ball for the occasion that exceeded anything that the village had seen before. More than one hundred couples were present, some of whom had driven from Malone, fifty miles away. The success of this ball led to others, and Blood's Hotel became renowned for this kind of social function.

Blood ran the hotel until 1883 and then leased it to Charles H. Kendall who kept it till 1886. It was then subleased to George A. Berkeley who ran it until his tragic death in 1888.

Blood's Hill, southwest of the hotel, was part of his holdings; it was later used for ski jumping.

Orlando Blood, known far and near as "Lon" Blood, was born in Lewis, Essex County N. Y., July 29, 1822. Like all young men in those days, after getting through his schooling in district schools, he began laboring on a farm, and later began farming for himself. But soon, thinking there was more money in something else, he tried selling goods in Elizabethtown, N. Y. Not being just satisfied with that he decided to try hotel keeping. He went to Saranac Lake and bought of Jay Miller the hotel where [it] now stands, and which constitutes part of the Riverside Inn. Mr. Blood opened the hotel with a grand ball July 4, 1860, and had over one hundred couples. We know something about it ourselves, as we were there at his opening dinner on that day, after driving from Malone, 49 miles.

Mr. Blood relates a remarkable circumstance in relation to a ball he had in the sixties, during the war, when money flowed like water. At that time there was no specie in circulation, nothing but "shinplasters" (as they were called) in denominations of five, ten, twenty-five and fifty cents. At that ball he had one hundred couples. For clerks and bartenders he had Henry M. Prinn and Dr. Holcomb, both of Jay, N. Y., (and both now deceased) and for one of the managers, Milo B. Miller. He had no cash draw[er] that would hold all the shinplasters that were being taken in. So he got a tea chest. The ball kept up till into the next forenoon, and when business lulled the tea chest was full. After counting up they had taken in over nineteen hundred dollars and everything quiet.

Another amusing affair happened at a new year's ball Mr. Blood held on January 1, 1869. At that time guides and almost everybody in this section of the Adirondacks seemed to have plenty of money, and guides especially did not care more for a dollar than some of us do now for five cents. At this time there was a commercial man who came to Saranac selling Yankee notions. He was the first "drummer" that ever came into this section. His name was Shay. He was what we would call "a regular dude." He thought he would take in this dance and show them some points. As usual Mr. Blood had a large company. His dancing hall was not very large. The door leading into the hall from the side and close to the head of a narrow stairway. Henry Solan, who was a noted guide and lumberman and very powerful (now quite rich in California) had a very highly respected lady of this section on the floor for a cotillion, and happened to stand right by the doorway that led into the hall. Just about the time the music was to start, up came Mr. Commercial Man and touched Mr. Solan on the shoulder. The latter stepped back into the hall and the commercial man said to him: ""I will give you one dollar to let me dance with your partner." "You will, will you?" said Mr. Solan at the same time hitting Mr. Commercial Man a blow under the ear which sent him to the bottom of this narrow [stairway]. The hall and the dance went on just as if nothing had happened. But the gentleman at the foot of the stairs did not appear in the ball room again, and we are safe in saying he never attended another ball in this section of the Adirondacks.

Mr. Blood continued in the hotel business till 1883, when he leased the hotel to Charles H. Kendall, having been in the hotel twenty-three years. While in the business he accumulated a fine property. His charges were always moderate, and he would not let anybody go away hungry, whether they had money or not. If they needed something stimulating he would brew in a few moments and furnish lobelia if needed. In the Blood family there were four brothers and one sister, only "Lon" now remaining alive. The sister, Arvilla, was never married, and only one of the brothers, Paschal. The brothers' ages were as follows: Ryland, born 1813; George, 1815; Paschal, 1816; and Lou, 1822. We spoke of John Corbett's record as bartender at Paul Smith's, being there eleven years, which was an uncommon record for a bartender. We think that Johnnie Wilson of the Berkeley House, comes nearly if not quite up to that. At all events Johnnie Wilson is one of the most popular bartenders in Northern New York, and if any one wants to hear good French stories he should call on Johnnie.

The Enterprise of last week contained the announcement of the death of Orlando Blood, one of Saranac Lake's best and most favorably known citizens.

Mr. Blood had been in an enfeebled condition for many months past, but his death was not expected. It was therefore with great regret that our citizens received the sad intelligence of his demise. His funeral was held on Saturday afternoon at one o'clock, Rev. D. H. Corkran officiating. There was a large attendance of citizens and friends of the deceased. The remains reposed in an elegant oaken casket with rich silver trimmings, and upon the face of the deceased there could be seen, even in death, that kindliness of disposition and nobility of character which, during his lifetime, had won for him innumerable [fri]ends. The interment took place in the village cemetery.

Orlando Blood was born in Lewis, N. Y., on July 29, 1820. When he attained his majority he opened a general store in that place and conducted same until about the year 1860 when he moved to Saranac Lake, then only a little hamlet of half a dozen houses and containing, purchased a tract of land containing about eighty acres. This land today comprises the very heart of our little village. All that land south of Maine street was once his property and much of it is still in his name.

On the site of the Riverside Inn he [erected?] what was really the first hotel in this section. It is true that the Baker inn was then being conducted in the old house near Baker Bridge, but a regular hotel was up to that time unknown there. The hotel which he conducted was known as the Blood Hotel and was conducted by Mr. Blood for twenty-seven years, then he sold it to George A. Berkeley who conducted it until the day [of] his death. To-day the finest hotel in Saranac Lake stands as a monument to our pioneer hotel man.

When the Saranac Lake Light, Heat and Power Company was organized Mr. Blood invested considerable capital in that enterprise although he never attempted to secure a controlling interest. He was a. public spirited man and although he never aspired to hold office, was for a number of years a supervisor of this town. He ever held the welfare of the village uppermost and was never slow to encourage anything that to him would appear as being to the interest of the community.

Mr. Blood never married, seeming to prefer the quiet life of bachelordom to that of the married state. His was a quiet, retiring disposition, and yet he was ever ready with a helping hand to the unfortunate or needy. He was a lover of fast horses and fine stock always owned a number of these.

Three nieces, all residents of this village, survive him, Mrs. Rose Scriver, Mrs. Jacob Lauritson and Mrs. James Moody. He also has relatives living in [?] and Westport.

By reason of his long residence in our [?], Mr. Blood is a man who will be missed. He was a man among a thousand , one whose like will never be known again in Saranac Lake.