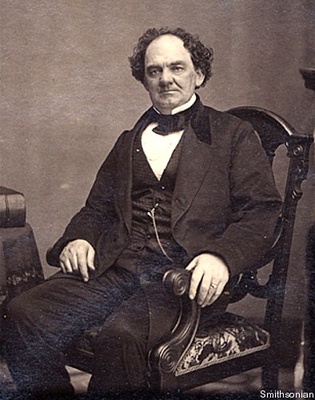 P.T. BARNUM AND HIS POND

Local lore has it that Barnum Pond (off New York Route 30 just north of the Paul Smiths VIC) was named by Paul Smith for his friend P. T. Barnum who was a frequent guest at Paul’s hotel and liked to fish in the pond. This has often appeared in print, most recently in Adirondack Yesteryears, A Guide to Adirondack Historic Sites, Museums, and Events Today, published by the Adirondack Regional Tourism Council in 2001.

Phineas Taylor Barnum was a fascinating individual, a true marketing genius who was willing to take big financial risks for potentially great rewards. He was born on July 5, 1810 in Bethel, Connecticut and held various jobs in his youth. He moved to New York City in 1835 and ran a small grocery store on South Street.

In Philadelphia he saw Joice Heth, an old black woman, being exhibited as the 161 year old former slave nurse of George Washington. The show was obviously phony but the woman’s performance caught Barnum’s fancy. Wondering just how far he could stretch the public imagination, he sold the grocery for $1,000 and bought the rights to Heth and exhibited her in New York City at Niblo’s Garden (a theater), eventually clearing $1,500 a week. When she died the following year (at approximately age 80), he buried her amid well publicized mourning, in his own family plot, then ran anonymous newspaper articles attacking her authenticity and other articles defending his patriotic intentions.

For the next four years Barnum traveled the country with a black face dancer and a juggler, ran an entertainment steamboat on the Mississippi, and sold Bibles.

Barnum returned to New York City in 1840 and leased the Vauxhall Gardens (another theater) and introduced a variety show of singers, dancers, jugglers, comedians, etc., with different performers each night. This type of entertainment proved popular and in 1841 Barnum was able to buy the old Scudder Museum, a five story building at Broadway and Ann Streets just south of City Hall, and renamed it the American Museum. 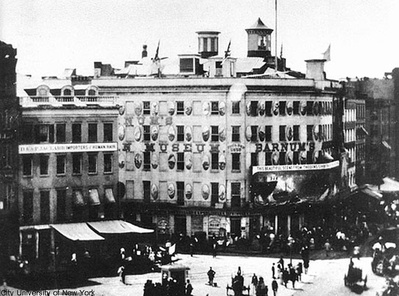 Convinced by now that there was no limit to the public’s gullibility, he stocked the museum with a variety of curiosities. On the premises were woolly horses, bearded ladies, a Fiji mermaid and the famous 40 inches tall General Tom Thumb, plus giants, gypsies, American Indians in tribal costume, living statuary, Punch and Judy shows, a model of Niagara Falls and exotic animals. Not the least of the attractions was a door marked “Egress” which many patrons flocked to open, only to find themselves exited outside.

In 1850 Barnum mortgaged everything he owned and came up with $150,000 to hire singer Jenny Lind, the “Swedish Nightingale” to give 150 concerts around the country. Barnum’s ability to whip up publicity was amazing. He made the Swedish singer a national celebrity and her concerts were a sell out everywhere. Barnum cleared $500,000 from her tour and became a rich man.

The American Museum burned down in July 1865 in a spectacular blaze that left a dead whale in the middle of Broadway for two days. Barnum took a brief retirement from show business and served in the Connecticut legislature from 1867 - 1869. He was elected mayor of Bridgeport in 1875, where he developed an exemplary workers community and lived in a grotesque mansion he called “Iranistan.”

In 1871 he proclaimed with extraordinary publicity the opening of “The Greatest Show on Earth,” a circus that he quickly developed into a three ring extravaganza. He combined forces with his chief competitor, James A. Bailey, in 1881 to form the great Barnum and Bailey Circus. The next year he purchased Jumbo, a huge African elephant, from the Royal Zoological Society in London, and proceeded to advertise the beast as the world’s only surviving mastodon. 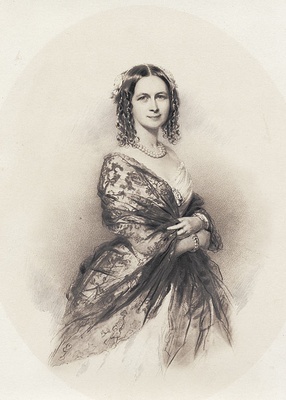 Barnum professed the belief that Americans wanted to be “humbugged” and thus diverted from reality, and he always presented a show that was worth more than the price of admission despite its deceptive advertising. Reputedly the man who said, “There’s a sucker born every minute,” Barnum possessed a genius for showmanship that reaped him a fortune and brought entertainment to millions of people. Barnum died on April 7, 1891 and is remembered today at the Barnum Museum in Bridgeport, Connecticut.

So, was Barnum Pond Named after P.T. Barnum? Unfortunately, the answer is no. The map of Franklin County that is included in Franklin B, Hough’s History of St. Lawrence and Franklin Counties, published in 1853 shows that body of water as “Barnum Pond.” As this is six years before Paul Smith built his hotel on Lower St. Regis Lake, Paul could not have named it for his friend.

Well, if the pond was not named for P.T., who was it named for? Mary MacKenzie, the former historian for the village of Lake Placid and the Town of North Elba has a good theory. The old Military Road that ran by Osgood and Barnum ponds was constructed during the 1814-1817 period. At that time Iddo Osgood was the Road Commissioner and a North Elba native named Barnum the foreman for the road construction. It is very likely they named these bodies of water after themselves. 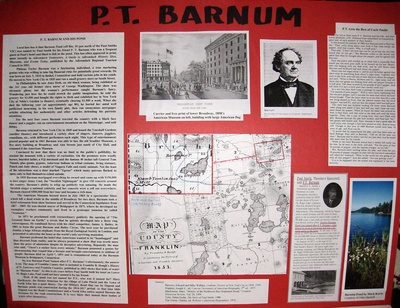 . . . On Aug. 22, 1889, a Barnum & Bailey Circus train, en route to Montreal from Gouverneur following a performance, derailed, leading to a six-car crash and the death of horses, camels and "a trick mule."

. . . (The rather long article ended with the following:) But according to the 1963 Courier & Freeman article, P. T. Barnum, who was vacationing at a Paul Smiths summer resort at the time of the crash, was notified of the wreck and sent back a five-word message: "The show must go on."