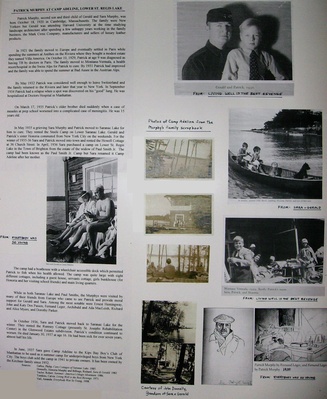 "Patrick Murphy" by Pat and Tom Willis, photo of display taken 2/2009. Click on the image to enlarge the display.

Patrick Murphy, second son and third child of Gerald and Sara Murphy, was born October 18, 1920 in Cambridge, Massachusetts. The family were New Yorkers but Gerald was attending Harvard University at the time studying landscape architecture after spending a few unhappy years working in the family business, the Mark Cross Company, manufacturers and sellers of luxury leather products.

In 1921 the family moved to Europe and eventually settled in Paris while spending the summers at Antibes on the Riviera where they bought a modest estate they named Villa America. On October 10, 1929, Patrick at age 9 was diagnosed as having TB by doctors in Paris. The family moved to Montana-Vermala, a health resort/hospital in the Swiss Alps for Patrick to cure. By 1931 Patrick had improved and the family was able to spend the summer at Bad Ausee in the Austrian Alps.

A brick at the Saranac Laboratory has been dedicated in the name of Patrick Murphy by Historic Saranac Lake.

By May 1932 Patrick was considered well enough to leave Switzerland and the family returned to the Riviera and later that year to New York. In September 1934 Patrick had a relapse when a spot was discovered on his “good” lung. He was hospitalized at Doctors Hospital in Manhattan.

On March 17, 1935 Patrick’s older brother died suddenly when a case of measles at prep school worsened into a complicated case of meningitis. He was 15 years old.

In May 1935 a grieving Sara Murphy and Patrick moved to Saranac Lake for him to cure. They rented the Steel Camp on Lower Saranac Lake. Gerald and Patrick’s sister Honoria commuted from New York City on the weekends. For the winter of 1935-36 Sara and Patrick moved into town and rented the Howell Cottage at 29 Church Street. In April, 1936 Sara purchased a camp on Lower St. Regis Lake in the Town of Brighton from the estate of the widow of Paul Smith, Jr. The camp had been known as the Paul Smith Jr. Camp but Sara renamed it Camp Adeline after her mother.

The camp had a boathouse with a wheelchair accessible dock which permitted Patrick to fish when his health allowed. The camp was quite large with eight different cottages, including a guest house, servants cottage, girls bunkhouse (for Honoria and her visiting school friends) and main living quarters.

While in both Saranac Lake and Paul Smiths, the Murphys were visited by many of their friends from Europe who came to see Patrick and provide moral support for Gerald and Sara. Among the most notable were Ernest Hemingway, John Dos Passos, Leger Fernand Leger, Archibald MacLeish, Richard Myers, and Dorothy Parker.

In October 1936, Sara and Patrick moved back to Saranac Lake for the winter. They rented the Rumsey Cottage (presently St. Josephs Rehabilitation Center) in the Glenwood Estates subdivision. Patrick’s condition continued to worsen. He died January 30, 1937 at age 16. He had been sick for over seven years, almost half his life.

In June, 1937 Sara gave Camp Adeline to the Kips Bay Boy’s Club of Manhattan to be used as a summer camp for underprivileged boys from New York City. The boys club sold the camp in 1941 to private owners. It has been owned by the Kirchner family since 1952.