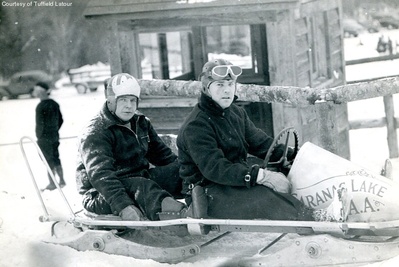 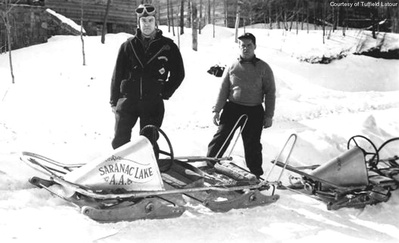 Undated, unidentified clipping in a scrapbook at the Saranac Lake Veteran's Club.SARANAC LAKE — Paul Dupree, 72, of 5 Winona Avenue, died Saturday, Jan. 21, 1990 at the General Hospital of Saranac Lake. He was born in Saranac Lake April 5, 1917, a son of Syriac and Etta (McGrain) Dupree. He was a graduate of St. Bernard's School and Saranac Lake High School and a veteran of World War II, having served as a staff sergeant in the Army in North Africa, Italy and the Philippines. He was a member of S. Dupree and Sons Construction Co., which built numerous area buildings, including the Thompson building on Broadway and the Eagle's Nest on Lake Street. The Eagle's Nest was owned and operated by Lex Thompson and housed the Philadelphia Eagles professional football team during summer training. He later owned and operated a cemetery monument service, before retiring in 1976. He married Mildred Swain on Nov. 29, 1947 in St. Bernard's Church. He had been president and superintendent of Pine Ridge Cemetery in Saranac Lake, and was superintendent of St. Bernard's Cemetery. He had been a member of the village board in 1952, and a member of the North Elba Town Board, serving as Town Justice, from 1947 to 1972. He was also a member of the Olympic Organizing Committee, a charter member of the Saranac Lake Bobsled Club and National and North American Bobsledders, and was a champion American bobsledder. He was a member of the American Legion, Veterans of Foreign Wars, a third-degree member of the Knights of Columbus Council 599 and a fourth-degree member of the general assembly of the Bishop Gabriels Knights of Columbus.

Memorial donations may be made to the Carmelite Monastery, St. Bernard's School or the Saranac Lake Rescue Squad.